Our website is made possible by displaying online advertisements to our visitors. Please consider supporting us by disabling your ad blocker.
Home > Products > Gaining performance with latest Connext DDS and ROS 2 benchmarks
Test & Measurement

Test on open-source ROS 2 benchmarks compare Connext DDS performance against other DDS implementations using some public benchmarks, such as those used on the Open Robotics ROS 2 nightly CI build farm. In particular, it measures the areas of performance that are critical: latency, throughput, and reliability (packet loss). This article from Neil Puthuff, Senior Software Integration Engineer at Real-Time Innovations (RTI) will walk you through recent tests on open-source ROS 2 benchmarks.

As real-time distributed systems become increasingly complex, as are the factors that affect the performance of the systems during modelling and testing. Extrapolating results from simplistic performance tests or non-representative software deployments must be done carefully. Before users can rely on the results of any benchmark testing, they must ensure that the test conditions are applicable to their application architecture and design. As an example, ROS 2 systems are almost always built using multiple processes which allow the system to be lean, modular, and maintainable. Thus, test conditions should always reflect multiple processes. In addition, more accurate results come through representative, real-world setups that include scalability requirements, large data sets and a many-to-many topology.

A top performance is critical to every project. RTI Connext DDS has been designed to provide throughput that both scales with payload size and delivers very low latency. So how does Connext perform in real-world conditions?

The most-common applications for testing ROS 2 Middleware Wrapper (RMW) performance share a common design and code base. We’ve used the same test run on the ROS 2 nightly CI build site to replicate their posted results, and have noted:.

So why does this matter? Communication between application threads in a single process doesn’t require middleware. Threads can exchange data and data-references directly over the common memory space provided by the process. Therefore, performance test results run using a single process are not representative of what realistic systems will see.

Let’s try a benchmark test that looks more like a ROS 2 system that we’ve seen in actual production environments. The popular benchmark test programs are complicated, and don’t look like ROS2 applications, whereas the test used for this article looks like a ROS2 application and is very easy to understand (fewer than 100 lines of source code) The test is composed of three types of ROS 2 nodes (SOURCE, WORK, SINK) which run in separate processes, each measuring the latency of the underlying RMW implementation as data is passed through the system.

This test is designed to support many different system configurations, by arranging as many SOURCE, WORK, and SINK nodes as needed: For this test, we’ll be using a simple SOURCE–>SINK arrangement (without any WORK nodes) to match the primary configuration of the nightly ROS 2 build test.

The test application is built as a normal ROS 2 package, just like any other ROS 2 application: This is far from a comprehensive benchmark test, but it is more closely aligned with real-world ROS 2 systems and already produces some interesting, non-intuitive results.

One of the more noticeable results is the vast improvement in performance from the two new RMWs for RTI Connext: (Fig. 1) 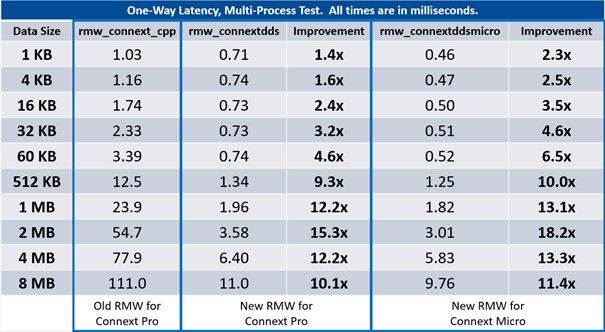 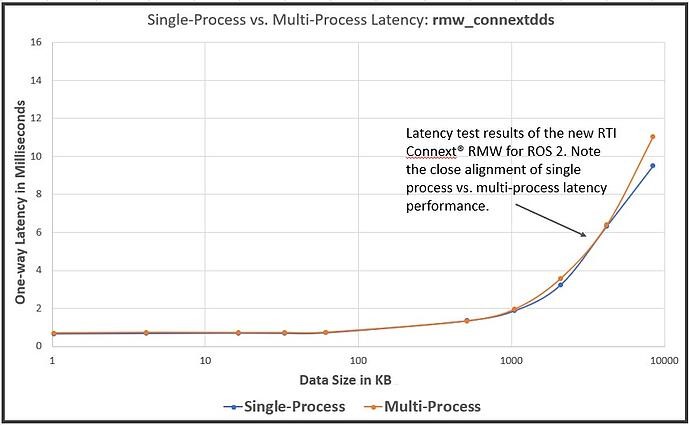 The second observation is the poor correlation of multi-process and single-process test results for some RMW implementations, but not for Connext: Some RMWs that exhibit good performance in single-process results are actually the worst performers when running the same test in multiple processes. This is due to the use of ‘Local Delivery’, a shortcut that detects if the data destination is in the same process as the source, it will bypass the network stack and move the data directly to its destination.

Local delivery in a single process application has its uses, but most of the time it will not be representative of a deployed system. And if you were architecting that system that depended on deploying multiple ROS nodes in the same process and needed to squeeze that extra bit of large-data performance, you could also get it by sending a data-pointer rather than the data itself.

Connext DDS also supports a Zero Copy mode that can get the increased performance when sending large data inside a Process or over shared memory. Moreover, the Zero Copy approach used by Connext does not ‘bypass’ the serialisation and protocol and therefore does not cause the undesirable ‘coupling’ side-effects. However, the Connext Zero Copy utilises a specialized API that cannot be mapped to the ROS RMW API. You can explore the benefits of the Zero Copy feature as well as more extensive performance scenarios using rtiperftest (the RTI performance benchmarking tool).

Benchmarks can be valuable if they are conducted under realistic conditions to your use case.