Textiles are getting smarter

The next generation of wearables could be based on sensors integrated directly into fabrics, heralding an age of electronic clothing, as Sally Ward-Foxton investigates.

Wearable electronic devices are getting a lot of attention at the moment. While the most popular form factor to date is the smart watch, there is a lot of potential for form factors as diverse as smart glasses, jewellery, headgear, belts and many more. All these are effectively traditional miniature electronics worn on the body as accessories – what if electronics could be integrated directly into clothes, taking the concept of wearable devices to the next level?

California-based BeBop Sensors works with special pressure sensitive fabrics to create sensitive, accurate sensor structures directly onto textiles. Keith McMillen, founder of BeBop sensors, explains that normal fabrics such as felt, cotton and spandex can be treated via a proprietary process that makes them piezo-resistive, that is, the treated fabric becomes conductive and its resistance changes when it’s mechanically deformed. An electronic structure made of conductive inks is then screen printed on the fabric to allow measurement of the resistance change (Figure 1). 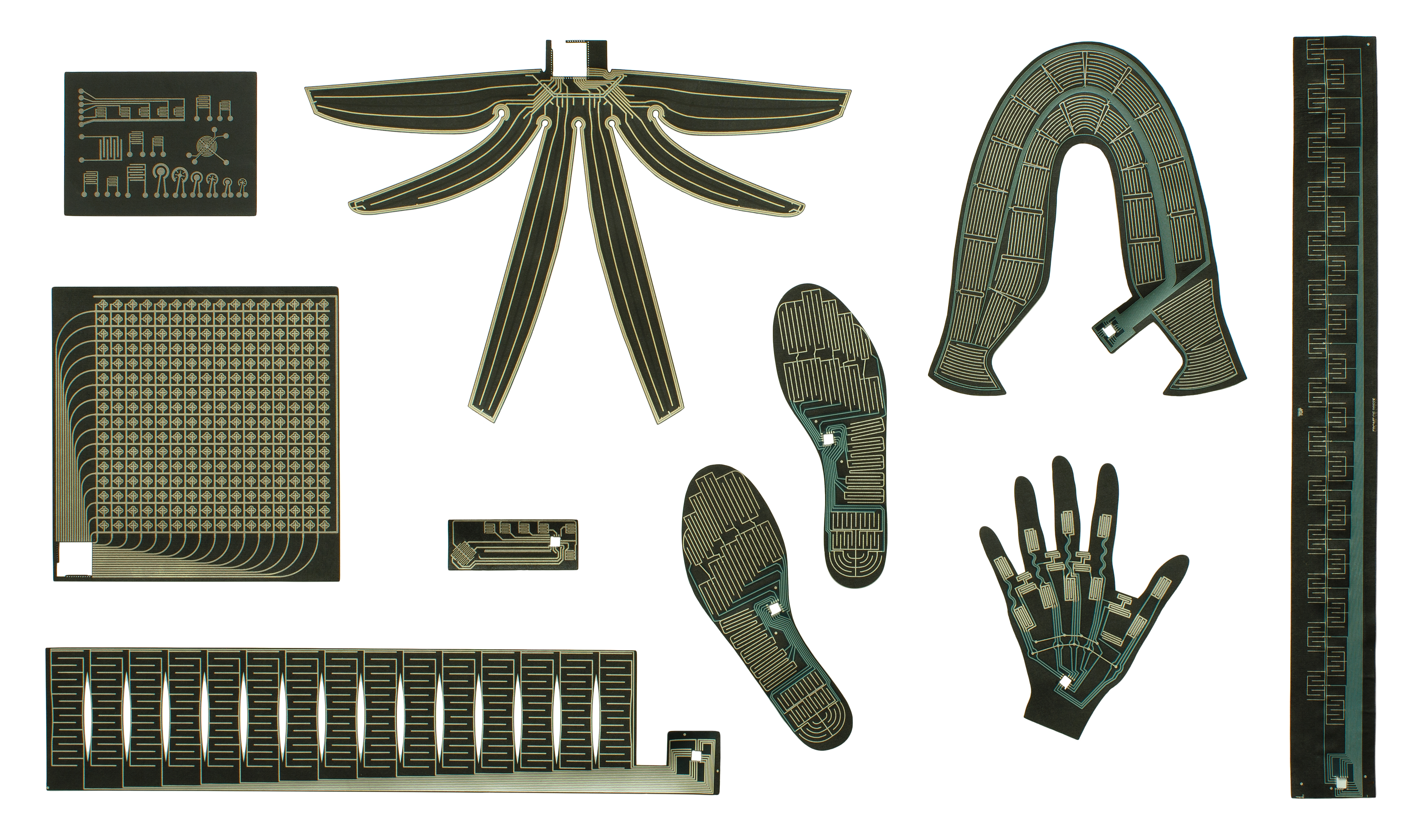 Figure 1: Some of BeBop’s proof of concept sensor structures, including insoles which measure the wearer’s weight and can be used to analyse their gait, and a helmet insert (top centre, palm tree shape) which is used to detect head impact.

“We print various types of conductors, resistors and dielectrics directly onto the fabric, and the geometries of these patterns will determine if the sensor is sensitive to xyz pressure, bending, twist or stretch,” McMillen says. “In fact, we can put all of these types of sensor onto the same piece of fabric, allowing it to have multiple response characteristics.”
BeBop, working with a technical fabric partner company, has been working on developing the fabric sensors over the last six years, to improve performance in terms of dynamic range, response time, and stability over both time and use. McMillen notes that some sensors can now respond fast enough to provide response frequencies in the kilohertz range, depending on the type of fabric used. The conductive inks used, developed by Dupont, are flexible enough to allow stretching of the fabric.
“Since we’re layering – some of our assemblies have 6-8 layers on – the compatibility of the inks, how much they grow when applied, and the chemistries become quite confusing and surprising... many of the inks are stretchy, and will easily stretch 20-25% without any serpentine patterns, you can just have a straight line and have it stretch that amount,” McMillen says. “You end up with basically a multilayer circuit board, integrated into the fabric.”
A small electronic module, mounted directly on the fabric, controls the circuits and collects data. The module is a small flexible board with ‘a couple of pieces’ of highly integrated silicon on it. Functions include ADC, regulation, computational power and communications capability. Bluetooth or USB versions are available.
The module, and the rest of the circuit, is powered via a couple of ink ‘traces’. Power can come from a smartphone battery, if connecting to a user’s personal device, or from a small battery. Consumption is dependent on the frequency of measurement required and can be as little as microamps in some applications, allowing the use of energy harvesting to make the circuits self-powered. According to McMillen, the shoe insole form factor shows the greatest promise for energy harvesting as the movement of walking releases the most energy.
As the technology can be used on many different types and thicknesses of fabric (typically 0.5mm, though it can be less), its properties are compatible with wearables in clothing. The fabric can be washed, as polyurethane is used to selectively isolate sensitive electronics, and it can be dried in a dryer, though ironing may be too much for the electronics. In fact, BeBop’s technology show promise in many different application areas (Figure 2), including clothing and sportswear, but McMillen says that interest is primarily coming from the health and wellness market for products like shoe insoles that can be used to monitor gait and foot swelling in diabetics, or wheelchair seat pressure maps. Sports helmets are also a target area, as is automotive safety, including steering wheel sensors which detect if the driver’s grip loosens, which could indicate that they are falling asleep. 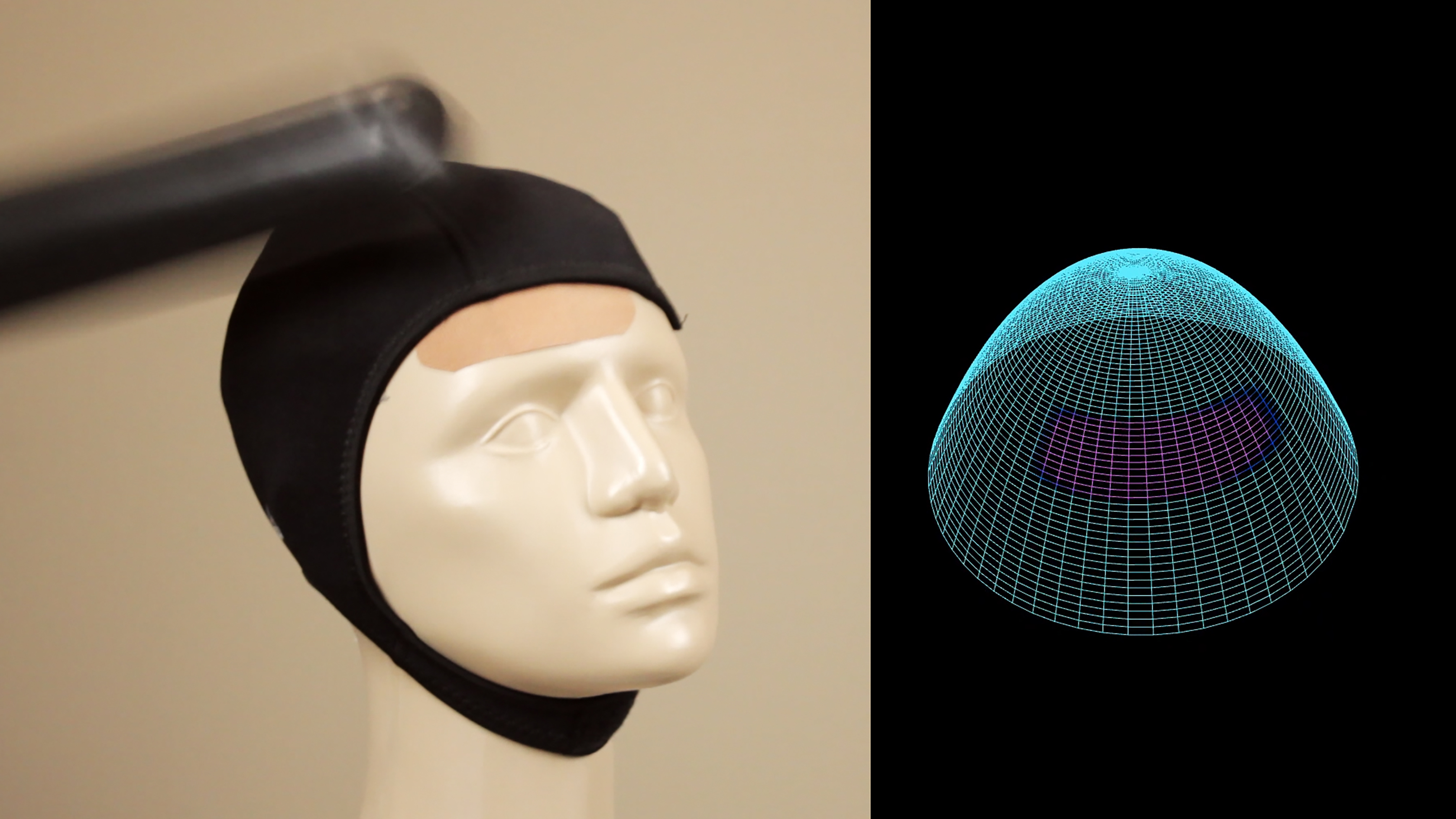 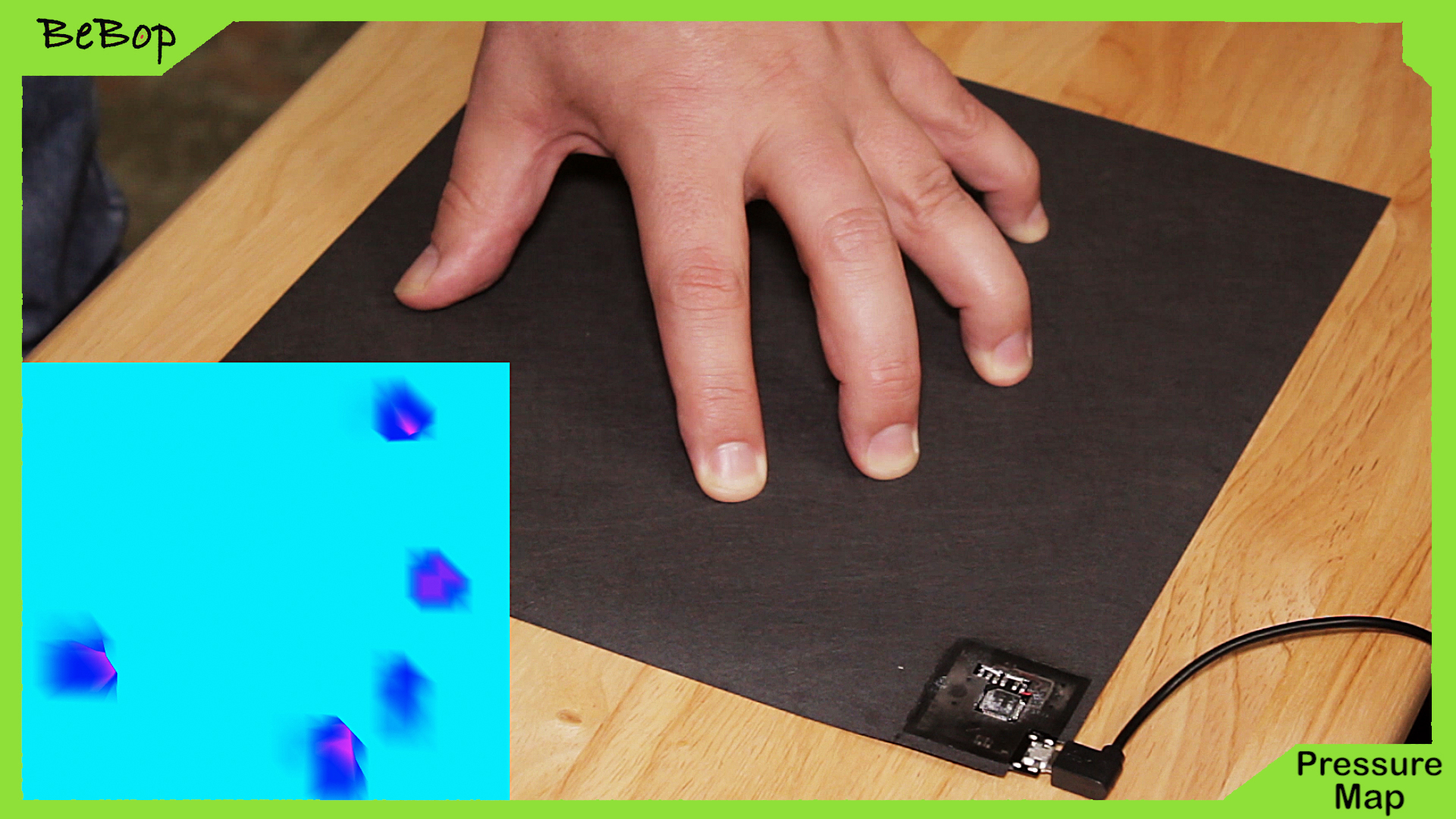 “Wearables is certainly getting lots of attention in the press, but I think it’s really the fact that these are flexible sensors with excellent accuracy and repeatability that makes them appealing,” McMillen says. “There are applications that people have been looking to solve for decades, and smart sensors that are flexible fit the bill quite nicely.”

Measuring Stretch
StretchSense, based in Auckland, New Zealand, is using an entirely different technology in its textile sensors. The company’s fabric sensors change their capacitance based on mechanical deformation when the fabric is stretched.
“Our stretch sensors are available in fabric and silicone,” explains Shin Jeong Park, Head of Marketing at StretchSense. “Both work on the same principle as a flexible capacitor. As you stretch or squeeze the sensor, its capacitance changes, and we can derive motion information from these changes.”
The sensor comprises two parallel flexible electrodes, with the capacitance of the structure being directly proportional to the area of the electrodes, and inversely proportional to the distance between them. When the sensor is stretched in one or more directions, its area increases, and the separation between the electrodes decreases; both changes cause a rise in capacitance which can be measured. The fabric sensor available in the StretchSense evaluation kit has a capacitance around 330pF un-stretched, rising to 440pF when stretched, with a typical sensitivity of 1.38pF per mm of extension.
Park explained that the silicon sensor is designed for the healthcare and industrial spaces, whereas the fabric sensor is optimised for the sports and wearables industries. The silicone sensor can be made with slightly different materials for applications that demand high precision measurement of small strains, versus wearable sensors that need to measure bigger strains.
The fabric version has a sewable ‘dead zone’ around the edges, so that it may be sewn into garments without damaging the active sensing area (Figure 3). 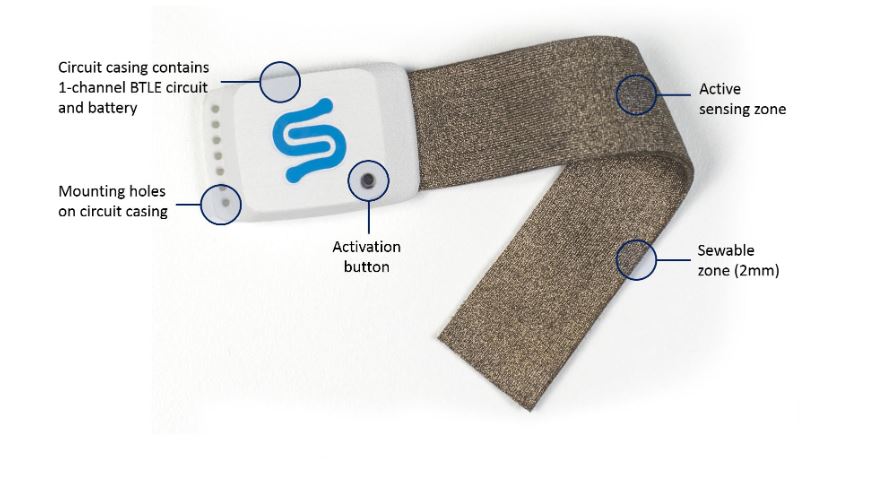 Washability is still on the development roadmap, but the sensors have already been integrated into commercial products. One is in the form of a suit that monitors an athlete’s movements, developed by a company called Heddoko; the suit enables coaches to analyse athletes’ movements in detail to maximise efficiency and minimise the risk of injury (Figure 4). The suit uses multiple StretchSense devices to measure motion in multiple axes without causing noticeable reaction pressure. 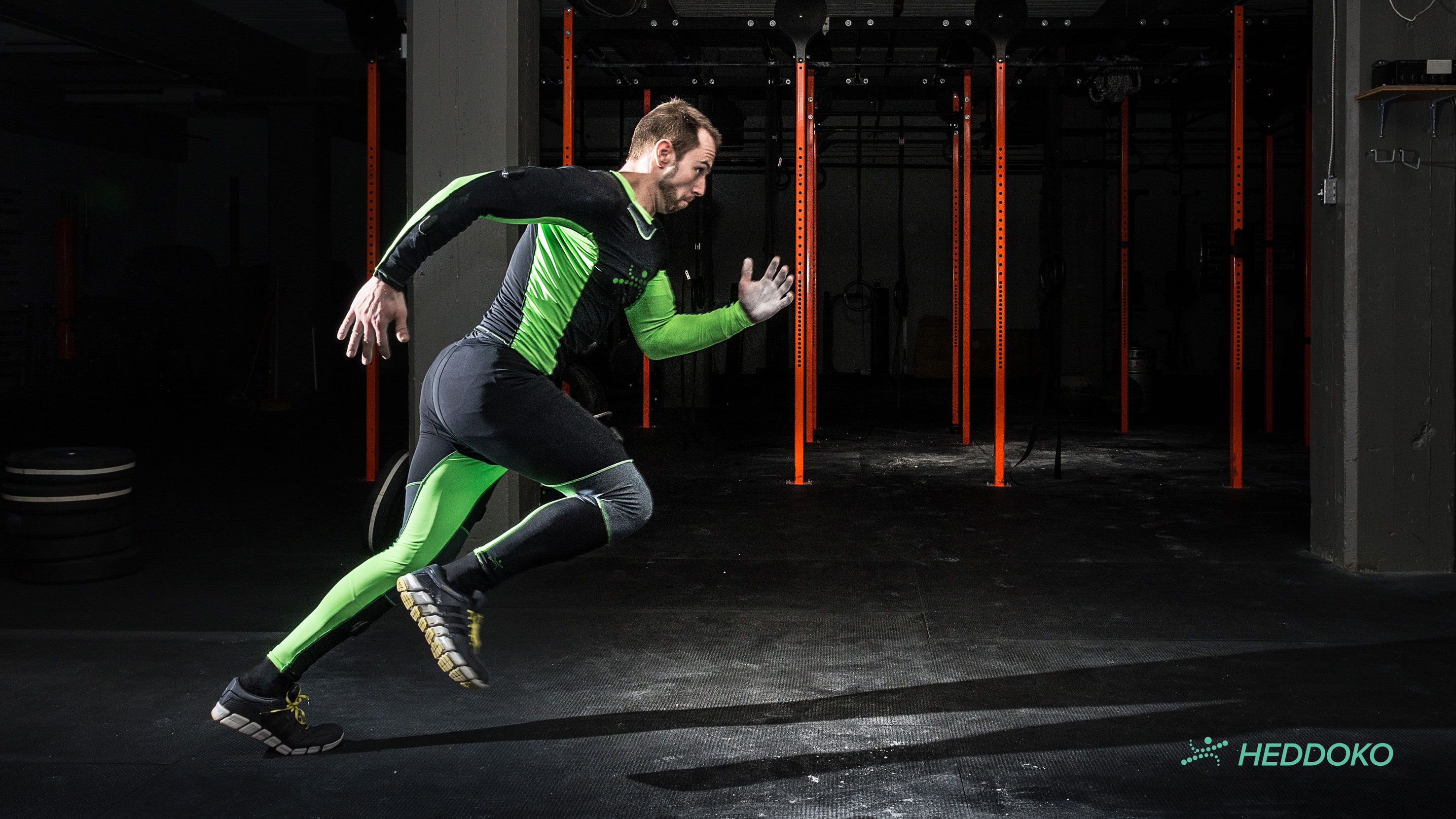 Figure 4: The Heddoko suit, which contains multiple StretchSense fabric sensors, allows coaches to gain insight into an athlete’s performance by monitoring how they move.

“StretchSense sensors can be connected to an electronic module which transmits raw capacitance data in real-time to a StretchSense data capture app,” Park adds, revealing that transmission of sensor data at 100Hz is via 5-channel Bluetooth transceiver. Cutting the rate to 25Hz allows the use of Bluetooth Low Energy for applications that demand low power operation – it can operate from a coin cell battery. For ultra-low power operation, StretchSense has recently launched a self-powered ‘wear and forget’ sensor, which uses energy harvesting to power itself from the user’s movements. “Our users no longer have to take off their wearables or recharge them. This will be a game changer for the wearables industry,” Park says.