Development kits for sensors from Infineon are significantly reducing design effort – and thereby development time and system costs. For reliable and fast measurement of speed, Infineon Technologies has announced the new Hall sensor TLE4922 as well as the 'Speed Sensor 2Go' design kit that goes with it. The TLE4922 was developed for industrial and automotive applications, where fast and reliable measurement of speed is critical, such as speed detection of crankshafts and transmissions in two-wheelers and three-wheelers.

Industrial applications are speed detection in production and building automation as well as the control of electric drives.

TLE4922 for reliable speed measurement and less system cost
The TLE4922 Hall sensor reliably measures changes of magnetic fields. This means it can be used for speed detection in a range of wheel types, such as magnetic encoder wheels or ferromagnetic gear wheels. Apart from its flexible range of application, the TLE4922 also lowers system costs. For instance, it enables use of a simple, cost-efficient magnet in a back-bias configuration, while providing high air gap performance and shift accuracy. The sensor is also robust in withstanding vibration and air gap jumps. It can provide precise speed detection across the wide magnetic field range of ±400mT. The large operating range simplifies the electrical circuit design and makes it robust and flexible. This makes installing the sensor easier, further contributing to a reduction in the system costs.

The TLE4922 is particularly suitable for a TIM (Twist Independent Mounting) configuration. It can therefore replace passive VR (variable reluctance) sensors in the motor and on the wheels of two-wheelers and cars. Compared to VR sensors, the TLE4922 delivers an accurate measurement of rotational speed as of 0Hz. It also has good jitter behavior and offers extensive protection functions against short circuits, overtemperature and reverse voltage. Its good electromagnetic compatibility (EMC) and ESD robustness make it suitable for use in harsh environments. It operates with a supply voltage of 4.5-18V and in a wide temperature range from -40 to 155°C. The sensor is available in a 4-pin SSO package. 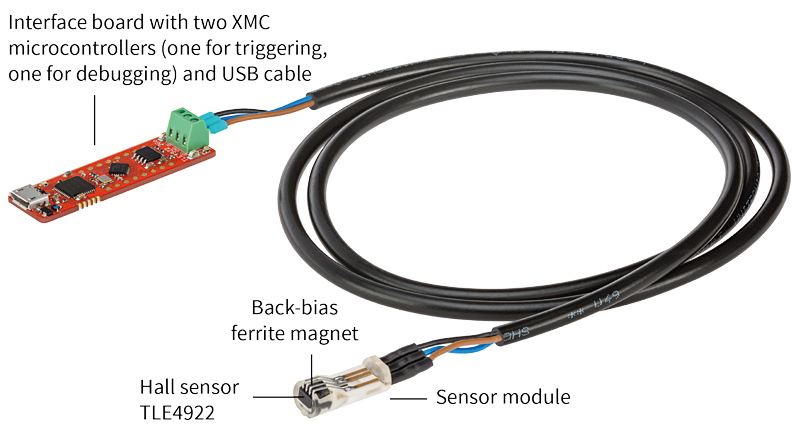