Recent advances in ultralow power microcontrollers have produced devices that offer unprecedented levels of integration for the amount of power they require to operate. These are systems on a chip with aggressive power saving schemes, such as shutting down power to idle functions. In fact, so little power is needed to run these devices that many sensors are going wireless, since they can readily run from batteries.

Unfortunately, batteries must be regularly replaced, which is a costly and cumbersome maintenance project. A more effective wireless power solution may be to harvest ambient mechanical, thermal, or electro-magnetic energy in the sensor’s local environment.

The LTC3588-1 shown in Figure 1 is a complete energy harvesting solution optimised for high impedance sources such as piezoelectric transducers. It contains a low loss full wave bridge rectifier and a high efficiency synchronous buck converter, which transfer energy from an input storage device to an output at a regulated voltage capable of supporting loads up to 100mA. The LTC3588-1 is available in 10-lead MSE and 3x3mm DFN packages. 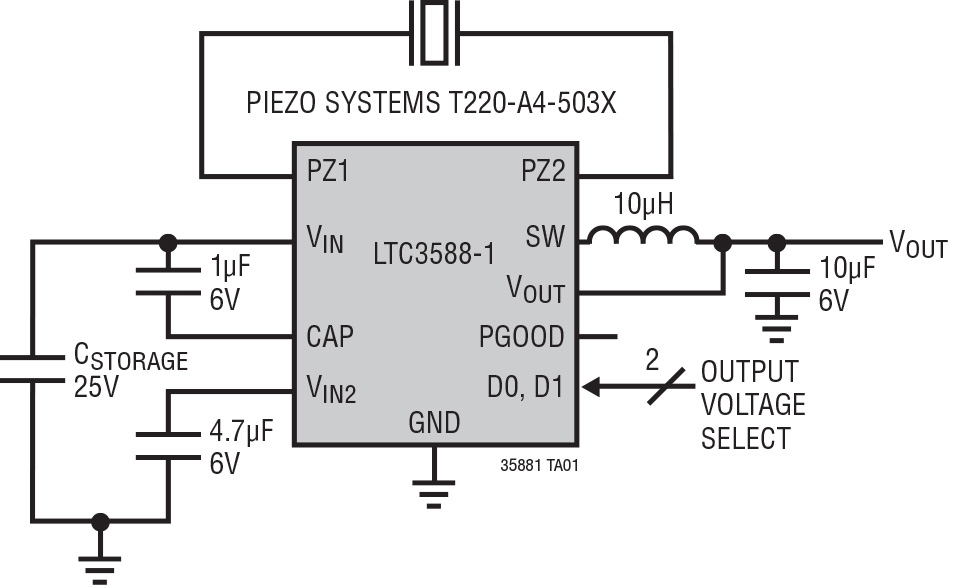 Figure 2 shows an energy harvesting power system that includes the energy source/transducer, an energy storage element and a means to convert this stored energy into a useful regulated voltage. There may also be a need for a voltage rectifier network between the energy transducer and the energy storage element to prevent energy from back-feeding into the transducer or to rectify an AC signal in the case of a piezoelectric device.

Application examples
The LTC3588-1 requires the output voltage of the transducer to be above the under voltage lockout rising threshold limit for the specific output voltage set at the D0 and D1 input pins. For maximum energy transfer, the energy transducer must have an open circuit voltage of twice the input operating voltage and a short-circuit current of twice the input current required. These requirements must be met at the minimum excitation level of the source to achieve continuous output power.

Piezoelectric transducer application
Figure 3 shows a piezoelectric system that, when placed in an airstream, produces 100µW of power at 3.3V. The deflection of the piezoelectric element is 0.5cm at a frequency of 50Hz. 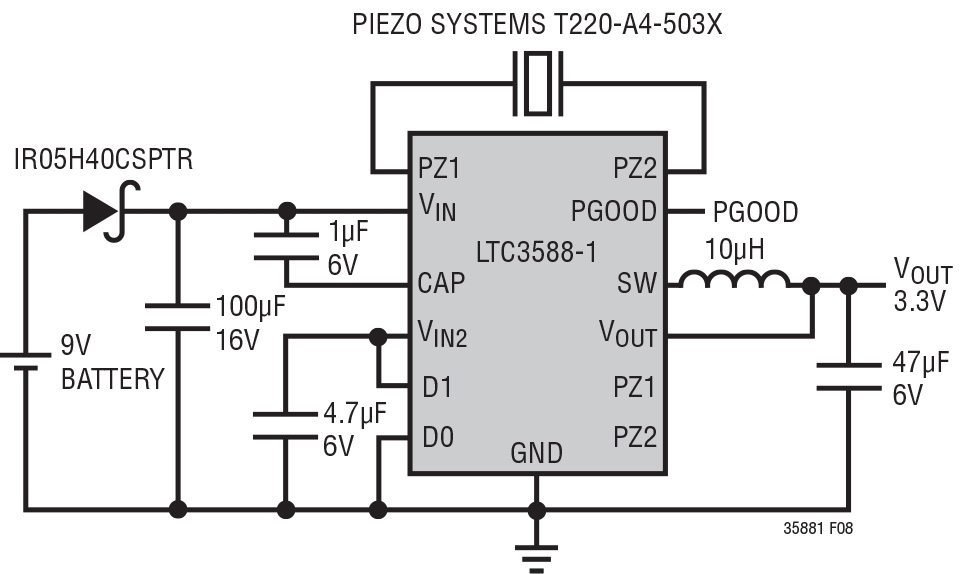 Seebeck transducer application
Figure 4 shows an energy harvesting system that uses a Seebeck transducer from Tellurex Corporation. A heat differential produces an output voltage that supports a 300mW output load. Connecting the transducer to the PZ1 input prevents reverse current from flowing back into the Seebeck device when the heat source is removed. The 100Ω resistor provides current limiting to protect the LTC3588-1 input bridge.

This application requires some outside-the-box thinking. Figure 5 shows a system that harvests energy from the electric fields surrounding high voltage fluorescent tubes. Two 12x24” copper panels are placed 6” from a 2x4’ fluorescent light fixture. The copper panels capacitively harvest 200µW from the surrounding electric fields and the LTC3588-1 converts that power to a regulated output. 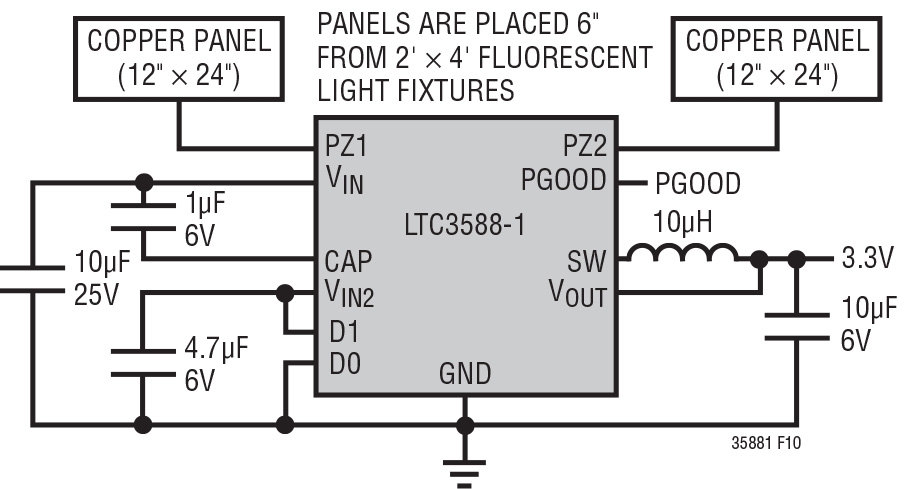 Conclusions
The LTC3588-1 allows remote sensors to operate without batteries by harvesting ambient energy from the surrounding environment. It contains all the critical power management functions: a low loss bridge rectifier, a high efficiency buck regulator, a low bias UVLO detector that turns the buck converter on and off, and a PGOOD status signal to wake up the microcontroller when power is available. The LTC3588-1 supports loads up to 100mA with just five external components.