CEA-Leti scientists have developed what they have reported to be "the world's smallest-footprint MEMS gyroscope that is capable of providing navigation-grade performance and sensing”.

The sensor is just 1.3mm2 in size owing to the researchers’ leveraging of ‘nano-resistive’ sensing. In other words, the France-based scientists designed the gyroscope to include resistors that were at the nanoscale, and this was integral to ensure that the device could be efficient while also remaining affordable.

As Phillippe Robert, MEMS business development manager and senior expert at CEA-Leti explains: “[The sensor’s] improved performance must not come with a high cost so the device will be priced competitively in large-volume markets."

Accordingly, “the size of these new gyroscopes [could] … not exceed 2 millimetres-squared per axis – while maintaining standard MEMS technology and using wafer-level vacuum packaging.”

The breakthrough comes at a time when MEMS, or microelectromechanical systems, are increasingly being designed to optimise sensing technologies, particularly in the automotive industry.

In fact, the current applications of MEMS gyroscope sensing range from, not only driver assist systems, but other major areas, too – from robotics and accelerometers to GPS outage (the latter area is when the failure of global positioning systems leads navigators to use microelectromechanical gyroscopes as a substitute).

According to CEA-Leti, to achieve the gyroscope's targeted status of ‘navigation grade’, the researchers had to ensure that the MEMS gyroscope was improved by “one or two orders of magnitude” when compared to that of the best commercial alternatives.

“Several design and technology improvements are right now under investigation.”

More information on the MEMS gyroscope, including how it fared in testing, can be found on the study’s journal paper here: ‘1.3 mm2Nav-Grade MEMS-Based Gyroscope’ in the Journal of Microelectromechanical Systems; plus, you can read CEA-Leti’s news coverage here. 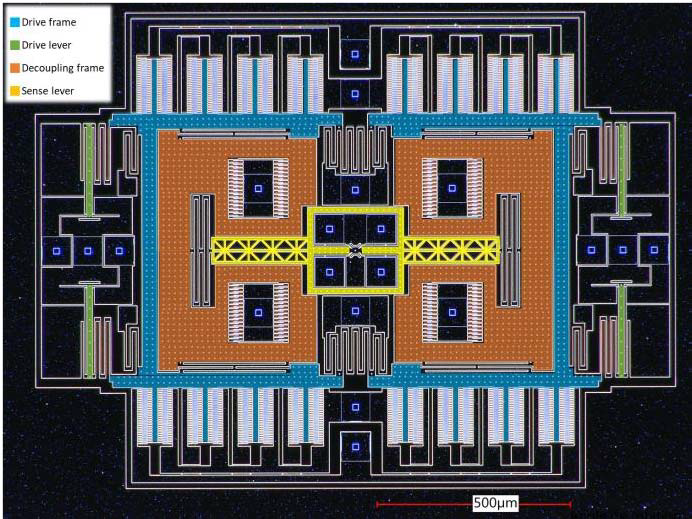 A top-down view image of the MEMS gyroscope