The picturesque Saxony Anhalt, Germany's 8th largest state, is home to some 23,000 photovoltaic systems. Around 2,700 wind turbines operate at 97 wind power plants between the Altmark and Harz regions. The renewable energy sector is booming here - and storage solutions for the green electricity being generated are urgently required.

Companies including Tesvolt GmbH in Wittenberg and research institutes like the Fraunhofer IFF in Magdeburg and the Fraunhofer IMWS in Halle are developing forward-looking ideas and products.

Anyone who drives through the Anhalt region towards the city of Wittenberg can be certain of passing solar installations and wind parks on their journey. Our region is at the heart of the energy transition. In 2015, renewable energy accounted for 48% of the gross energy production in Saxony-Anhalt. The "perfect" energy transition, however, requires efficient and intelligent storage system so that the stability of the power networks can be maintained. One solution comes from Saxony-Anhalt: at the Intersolar in Munich, Tesvolt GmbH is presenting its battery container system.

"It is basically our entire stand at the trade fair. We will be explaining - and can also demonstrate - how our batteries work," explains Mathias Zdzieblowski. Zdzieblowski is a customer advisor in the company that was established in 2014 and which makes battery storage systems for low voltage purposes. A giant-sized map of the world is posted on his office wall.

Tesvolt now has customers in Russia, Great Britain, Spain and Africa. It employs 30 specialists, who work in the company's battery manufacturing and in-house research and development departments. "We use lithium-iron-phosphate based batteries. They charge quickly, have a long lifespan, and have a high cycle stability. The manganese enables a high power load within a short period of time," explains Mathias Zdzieblowski. 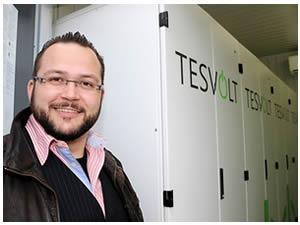 "A storage container like this one here has a high gross capacity of half a megawatt hour," explains Zdzieblowski, opening the door to reveal a narrow walkway with compartments on the left and right. The compartments contain batteries, the capacity of which can be topped up on an unlimited basis. It is pretty easy to hazard a guess: this mega storage system is designed for commercial and industrial use. For many commercial enterprises, battery cabinets would be sufficient. The sales director explains that their capacity starts at ten kilowatt hours.

Over the last year alone, his company has trained around 150 specialist partners. These are the installation companies which install the storage container or battery cabinet on-site at the end customer and ready for use. Despite this, Tesvolt is on personal terms with the majority of its customers in Germany.

One such customer is the Saxony-Anhalt company "Eis & Friends," a gastronomy and wholesale company for frozen food situated in Morxdorf near Jessen. A large photovoltaic system on the roof of its cold storage facility generates the electricity. So that the excess solar energy can be stored and the storage facility can also be supplied with the self-generated electricity at night, the company premises also include a storage container - the first that Tesvolt installed.

"We are a start-up company. It is very important for us to know the conditions and requirements of the customers on location and to monitor the use of our product so that we can develop it further," says Zdzieblowski, and provides us with a demonstration of the tablet that is given to all of his customers. He accesses the storage system in use at a dairy farm. The spikes on the graph charting the peak electricity consumption in the evening and the morning between the hours of 6 and 7 are plain to see. The high rates of consumption due to the milking, heating and refrigeration of the milk are usually outside sunlight hours. The same applies to wind power: the electricity simply would not be available without a Tesvolt storage system like the one in use at this farm. "The storage system is programmed so that enough electricity is always available for the emergency operations. The batteries are charged during the day so that the electricity is available for the evening milking, during the night, and for the milking the next morning," explains Mathias Zdzieblowski.

In a close collaboration with the world-leading specialists for photovoltaic systems technology SMA, Tesvolt is using their charging technology to align the battery systems to the exact requirements of the customers. The aim is to optimise the energy consumption and to reduce the peak loads.

It is in this very area that the Fraunhofer Institute for Factory Operations and Automation in Magdeburg, the IFF, also has expertise. "A team of researchers is developing dynamic energy management software which can be used to optimise industrial energy processes," highlights Przemyslaw Komarnicki, and explains: "The software regularly assesses the weather forecasts affecting the production of renewable energy. These are joined by the load forecasts every quarter of an hour, which are determined from the production plan and the required use of the systems and machinery. Using this information, the system can enable the energy control centre in a large company to make full use of the flexibility of its electrical power management on a technical and economical basis and to control its systems automatically so that peak loads can be prevented, for instance."

The energy technology specialist adds that the Fraunhofer IFF is currently testing one of the biggest mobile power storage systems in Germany. The 1MW battery is housed in a container the size of a railway carriage and could independently supply around 100 normal households with enough electricity for twenty-four hours.

Revolutionary storage solutions come from Saxony-Anhalt. The Fraunhofer Institute for Microstructure of Materials and Systems in Halle (the IMWS) is also attending the Intersolar. The institute is one of more than 100 partners from the energy sector and the worlds of science and research which together form the HYPOS consortium (Hydrogen Power Storage & Solutions East Germany). Its vision: to convert energy from wind and solar power plants into hydrogen on the basis of a special chemical procedure. "Green hydrogen can contribute to capturing the production peaks which occur during high levels of wind and intense sunshine. Instead of overloading the power networks with excessive levels of renewable energy, we can convert it into a resource which can be stored and put to material use," explains, Ralf B. Wehrspohn, director of the Fraunhofer IMWS. In this way, a specific quantity of green energy could be used by companies in central Germany without having to be transported south via disputed power lines.