Sweetgum trees thrive under diverse conditions, grow as fast as pine trees and provide the type of fiber needed for specialty papers-and they've long been desired by paper and bioenergy producers. But there's a hitch: Harvesting mature sweetgums can often be too costly or even ill-advised because they typically grow the best on the edges of swamps and in river bottoms, which are often inaccessible during the wet winter months.

Researchers at the University of Georgia may have solved this problem: They've crossed American sweetgums with their Chinese cousins, creating hybrid sweetgum trees that have a better growth rate and denser wood than natives, and can produce fiber year-round.

The hybrid sweetgum trees have enormous potential for the production of bioenergy and paper, said Scott Merkle, a professor in UGA's Warnell School of Forestry and Natural Resources.

"The very best hybrid sweetgums are being propagated to produce elite varieties, so that landowners will be able to plant trees that produce more biomass in a shorter time than the top-rated native sweetgum trees," he said.

The new hybrid varieties are already being sold commercially by ArborGen Inc., which began offering rooted cutting seedlings of the new varieties in 2015. This important step came after ArborGen's extensive field testing of the trees produced from tissue cultures in Merkle's lab in Georgia, South Carolina and Alabama.

The tests showed these hybrids outperform either of the parent species by 20% in both growth rate and wood density. The hybrid varieties are co-owned by ArborGen, a forest seedlings company headquartered in South Carolina, and UGARF, the University of Georgia Research Foundation. 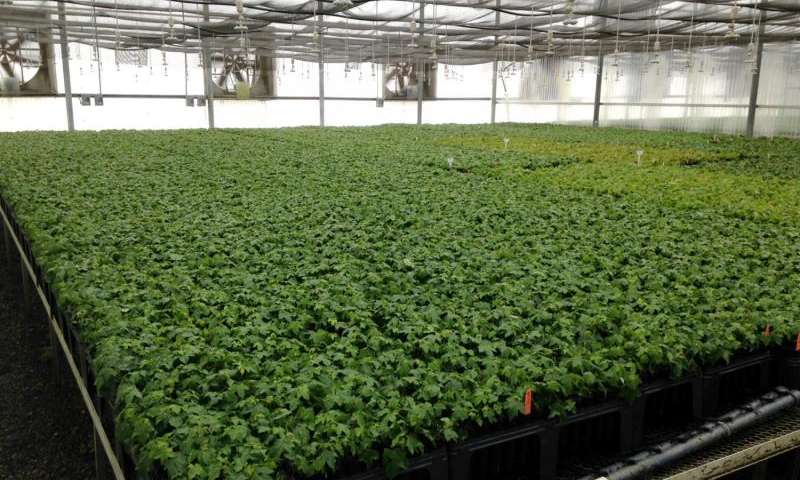 Researchers at UGA have crossed American sweetgums with their Chinese cousins, creating hybrid sweetgum trees that have a better growth rate and denser wood than natives, and can produce fiber year-round. Credit: University of Georgia

The new hybrid has been well accepted by forest landowners, particularly in the western areas of the Southeast, including Texas, Arkansas and Oklahoma. ArborGen officials say they produced 300,000 seedlings this year and sold out before the hybrid could even be marketed.

"We were testing the viability of this tree in the marketplace and are pleased to say it was received even better than expected," said John Pait, vice president of sales and marketing for ArborGen.

"We are now taking orders for next year with anticipation that we will see the same, if not greater demand, than this year. There will be a limited supply so we are asking customers that are interested to contact us as soon as possible."

A number of other hybrid trees have been produced for forest crops, including hybrid poplars, Eucalyptus and pines. But they haven't been that popular in the Southeast's forestry industry, said Merkle, who is also Warnell's associate dean for research. Hybrid poplars haven't performed well in the Southeast because they don't tolerate drought well, he said, and hybrid

Eucalyptus can't grow north of Florida because they're not cold tolerant enough to survive freeze damage. And the only commercially available hybrid pine trees, he added, are crosses between loblolly and pitch pines, which are really best suited to grow in the mountains of West Virginia.

But sweetgums-including hybrids-have already adapted to grow in the region in a variety of sites.

Merkle decided to combine hybrid breeding with somatic embryogenesis, the process of mass propagating trees from somatic cells-essentially propagating the embryos from seeds produced from crossing the two sweetgum species.

It all started in 1999 when other researchers with International Paper Company used pollen collected from three Chinese sweetgum trees in a test plantation in Mississippi to pollinate selected American sweetgums. They sent Merkle the seeds from these cross-pollinated trees, and then he propagated trees from their embryos. 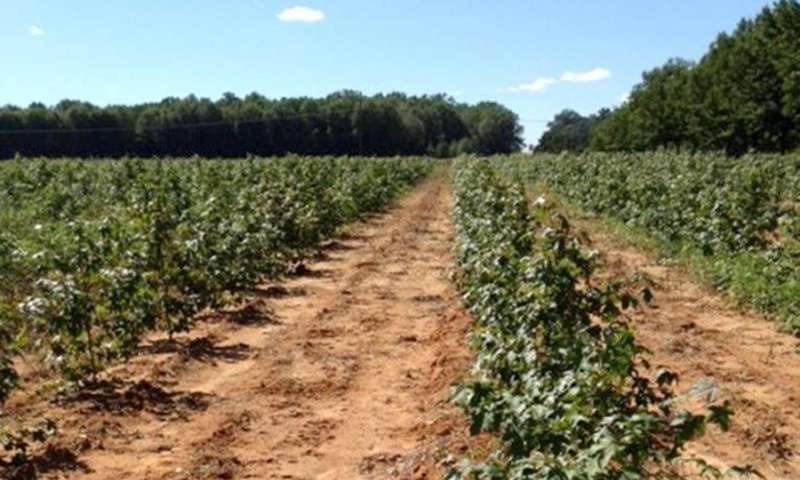 Researchers at UGA have crossed American sweetgums with their Chinese cousins, creating hybrid sweetgum trees that have a better growth rate and denser wood than natives, and can produce fiber year-round. Credit: University of Georgia

And that's where he got started: Merkle used these seeds to start cultures in his lab, creating thousands of embryos that they then germinated to produce "somatic seedlings" they then planted.

A second round of hybrid breeding and culturing happened in 2005, creating several hundred seedlings of this new hybrid that were then planted in field tests by International Paper and ArborGen over the next 10 years.

These new hybrids can be identified by their unique leaf shape, Merkle said, which is midway between the five-lobed American sweetgum and the three-lobed Chinese sweetgum.

Combining these two techniques-hybridising and propagating-sped up testing that could have taken much longer, Merkle said. It also allowed them to more accurately test the quality of the new trees than by growing one tree from one seed and then waiting.

"By testing multiple trees of the same variety, we can be sure that the superior growth and wood density are due to their genetics, rather than other factors," Merkle said.

"The combination of hybrid breeding with somatic embryogenesis is very powerful, both for testing and for eventual scaled-up production of planting stock for deployment. We are also employing this strategy to help The American Chestnut Foundation produce blight-resistant varieties and to propagate ash trees so they can be tested for resistance to emerald ash borer."

After planting the seedlings, researchers simply watched to see which ones fared the best, ultimately narrowing it down to four varieties that showed the best growth rate and the densest wood. ArborGen then picked out those trees with the best traits, produced thousands more by rooted cuttings and began selling them last year.

Referred to as the Wood Basket of the World, the Southeastern U.S. is home to a thriving forest industry that has typically relied on softwoods like pine trees to supply the paper, lumber, bioenergy and other wood products manufacturers.

Georgia is also a leading exporter of wood pellets to countries using bioenergy in power production. These high-performing hybrid sweetgums can make an important contribution to plantation forests, adding to the sustainability of this wood basket, Pait said.