Greener solar cells are based on AgBiS2 nanocrystals

The crystals are strong panchromatic absorbers of light and have been further engineered to act as an effective charge-transporting medium for solution-processed solar cells.

According to Dr. Maria Bernechea, the cells "contain AgBiS2 nanocrystals, a novel material based on non-toxic elements. The chemical synthesis of the nanocrystals allows exquisite control of their properties through engineering at the nanoscale and enables their dissolution in colloidal solutions".

"The material is synthesised at very low temperatures (100ºC), an order of magnitude lower than the ones required for silicon based solar cells." 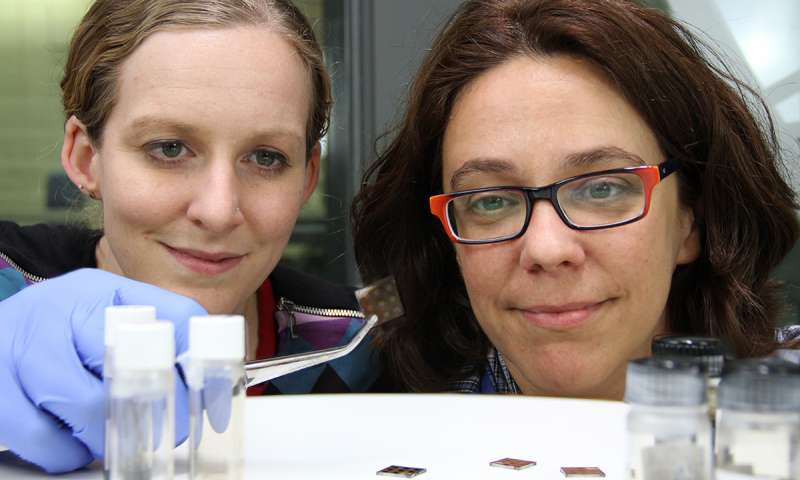 The team of researchers at ICFO developed these cells through a low temperature hot-injection synthetic procedure. They first dispersed the nanocrystals into organic solvents, where the solutions remained stable for months without any loss in device performance.

Then the nanocrystals were deposited onto a thin film of ZnO and ITO, the most commonly used transparent conductive oxide, through a layer-by-layer deposition process, until a thickness of approximately 35 nm was achieved.

"AgBiS2 solar cells can be made in air at low temperatures using low-cost solution processing techniques without the need for the sophisticated and expensive equipment required to fabricate many other solar cells. These features give AgBiS2 solar cells significant potential as a low-cost alternative to traditional solar cells," Dr. Nicky Miller comments.

This highlights the potential of AgBiS2 as a solar-cell material that in the near future can compete with current thin film technologies that rely on vacuum-based, high-temperature manufacturing processes.

As ICREA Prof at ICFO Gerasimos Konstantatos concludes, "This is the first efficient inorganic nanocrystal solid-state solar cell material that simultaneously meets demands for non-toxicity, abundance and low-temperature solution processing. These first results are very encouraging, yet this is still the beginning and we are currently working on our next milestone towards efficiencies > 12%".

The results obtained from this study signifies a turning point in the concept and production of solar cells, moving from silicon cells to low-cost environmentally friendly solar cells that will definitely imply a safer and more sustainable world for the future.