Home > Products > Global circumnavigation to use nothing but solar
Renewables

Global circumnavigation to use nothing but solar

From the Wright Brothers' first powered flight in 1903, through the first solo global circumnavigation in 1933, to the proliferation of commercial aviation in the latter half of the 20th century, humanity has always held a special place in its heart for flight. On 9th March 2015, Solar Impulse 2 departed on the first leg of a groundbreaking mission: to fly around the world using only the power of the Sun.

Bertrand Piccard, son of famous explorer and oceanographer Jaques and grandson of inventor Auguste, will share pilot duties with Swiss compatriot André Borschberg, as the plane completes its 12-leg journey around the globe. At the time of writing, Solar Impulse 2 is nearing its third destination, Ahmedabad, India, having flown the 345 mile first leg from Abu Dhabi, UAE, to Muscat, Oman, in 12 hours. 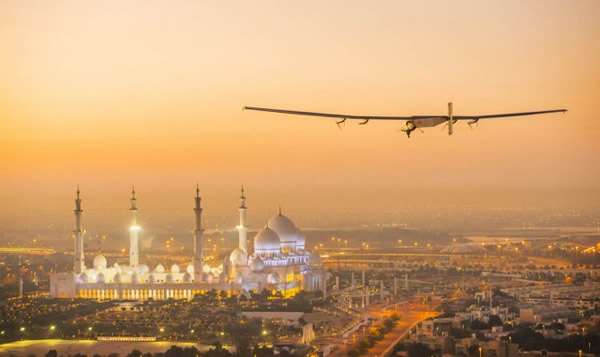 The small four-propeller aircraft, pictured above on a test flight into Abu Dhabi, makes use of a 71.9m wingspan (for comparison, the plane is just 22.4m in length, and a Boeing 747-8I's wingspan is 68.5m) to access as much lift as possible and to provide 269.5m2 of PV panel real estate, accommodating 17,248 photovoltaic cells rated at 66kW peak. Taking off at 22mph, the plane has a nominal top speed of just 77 knots (87mph), but can use headwind to increase its velocity. Each propeller is powered by a battery, which takes its charge from the solar cells on top of the craft.

The Swisscom satcomms system utilised transmits over 100 different pieces of data to the Mission Control Centre, from temperature of the motors to the position of the aircraft and tension in the accumulators. Addressing the challenge of sending video whilst subject to extreme antenna weight constraints, a low-bandwidth 50kb/s solution was implemented by Swisscom. Weighing less than 5kg with an energy consumption not exceeding 50W, this solution is the pilot’s lifeline to the ground and a great tool for fans to feel part of the adventure. Data, video streams, insights and points of interest are relayed in real time and can be followed on the Solar Impulse website.

A major difficulty which the team have had to face when designing a theoretically self-sustaining, everlasting vehicle is the human body's suitability (or lack thereof) for the task.

“What is really special, is that it is the first and only airplane in the world which has unlimited endurance. We have an airplane which is fully sustainable in terms of energy, and our challenge now is to make the pilot sustainable as well,” commented Borschberg. A combination of materials and technology will help insulate the pilot from the unforgiving -40 to +45°C temperatures, lack of oxygen, constrained space and mental challenges of hours and days spent at 39,000 feet.

When Solar Impulse 2 lands in each location, its team will carry out maintenance as well as try to spread a campaigning message about clean technology to governments, NGOs, schools, universities and people. After arriving in Ahmedabad, the plane will continue to Varanasi, before entering Myanmar and landing at Mandalay. After stopping in Chongqing and Nanjing, China, the plane will cross the Pacific, touching down in Hawaii on its way to Phoenix, Arizona. The next destination, still to be decided, is in mid-USA, from where Solar Impulse 2 will continue to New York. The plane will then cross the Atlantic, making a stop in either Southern Europe or North Africa, before returning to Abi Dhabi.

The price of solar electric panels fell 70% in recent years, costs are expected to halve again this decade, and Deutsche Bank forecasts that, based on current fossil fuel prices, solar will produce power as cheaply as gas in two thirds of the world before 2020. In the UK the solar industry could compete with wind within 18 months and with gas in the near future. In the USA, solar jobs already outnumber coal jobs.

It is clear that, however fragile the journey of Solar Impulse 2, it represents the bright future of human aviation. A successful circumnavigation will give weight to Piccard and Borschberg's message, helping inspire people to dream, create and realise the ‘impossible’.