A new study has identified the four actions that would have the greatest impact on an individual’s greenhouse gas emissions: eating a plant-based diet, avoiding air travel, living car free, and having fewer children. The comprehensive study analysed 39 peer-reviewed articles, carbon calculators and government sources to quantify the most high-impact personal lifestyle choices in developed countries.

“There are so many factors that affect the climate impact of personal choices, but bringing all these studies side-by-side gives us confidence we’ve identified actions that make a big difference".

"Those of us who want to step forward on climate need to know how our actions can have the greatest possible impact. This research is about helping people make more informed choices,” says lead author Seth Wynes.

The study found that, on average, eating a plant-based diet saves about 0.8 tonnes CO2-equivalents per year. Each roundtrip transatlantic flight avoided saves 1.6 tonnes, and living car-free for a year saves 2.4 tonnes.

To put this in context, per capita carbon dioxide emissions should not exceed 2.1 tonnes annually by the year 2050 - if the goal of limiting the global temperature increase to well below 2ºC is to be achieved.

Family size also mattered: when accounting for the impact of future descendants at current emission rates, having one fewer child would save 58.6 tonnes per year. However, reducing overall national emissions could make the climate impact of an additional child up to 17 times less.

The study also found that the four key actions identified are usually missed in government recommendations and high school textbooks, which instead tend to advocate small, incremental changes, such as recycling or switching to reusable shopping bags.

But according to the study, eating a plant-based diet saves about 4 times more greenhouse gas emissions per year than recycling. Avoiding just one transatlantic flight saves 8 times more, and living car-free saves 11 times more. Similarly, switching from plastic to canvas bags is less than 1% as effective for the climate as a year without consuming meat.

Kimberly Nicholas, associate professor at Lund University Centre for Sustainability Studies and study co-author, says, “We recognise that these are deeply personal choices. But we can’t ignore the climate effect our lifestyle actually has.

Personally, I’ve found it really positive to make many of these changes. It’s especially important for young people establishing lifelong patterns to be aware which choices have the biggest impact. We hope this information sparks discussion and empowers individuals,” she concludes.

Dr. Jonathan Foley, director of the California Academy of Sciences, commented: “Institutions also need to be leading by example. We need to use our positions to showcase climate leadership, and amplify positive individual actions across society.” The Academy announced that they will achieve net zero greenhouse gas emissions by 2025, the first major science museum to do so. 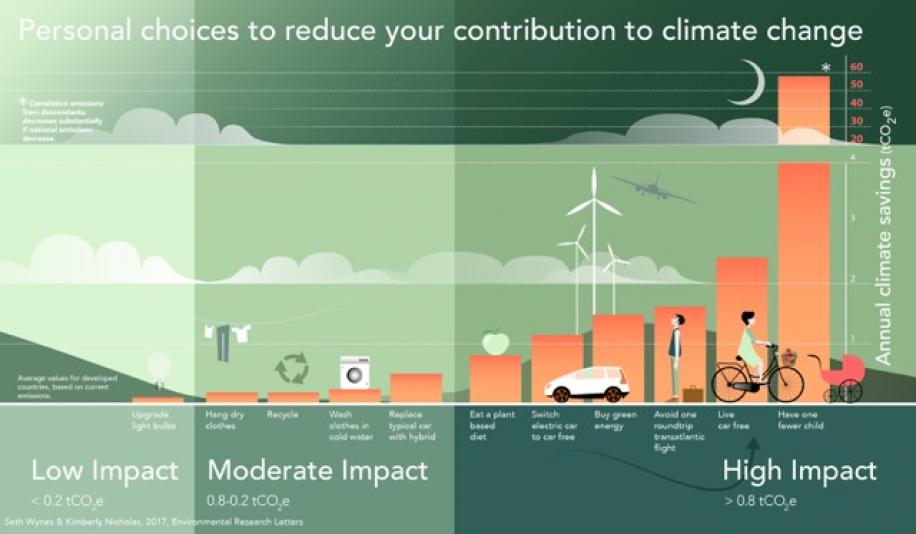 All actions were compared on a life cycle basis for one individual making the decision under current average conditions in developed countries. This means:

Emissions saved from switching from omnivorous to plant based diet (e.g. difference between emissions of foods consumed by self-selected meat eaters versus self-selected vegetarians). Includes emissions from fertilizers, methane production by livestock and transport of food to retail centers.

Emissions for one person flying on a roundtrip flight (e.g., New York to London) under average conditions. Note that long-haul flights are more (e.g., flying London to Hong Kong round trip is 2.97 tonnes).

Emissions saved per person based on average vehicle miles traveled and vehicle occupancy. Includes emissions from car production and maintenance in addition to combustion of fuel.

Estimates the cumulative impact of current and future descendants based on “percent of blood” for the offspring, and current emissions levels, for all emissions produced over the lifespan of descendants, divided by the life expectancy of each parent.