For the first time in the UK, the public was invited to trial autonomous electric shuttles operated by Keolis. For a month, passengers were able to try this new mode of ecological transport, which has begun to attract a growing number of cities as it offers a new response to mobility problems in urban centres.

Keolis’ autonomous shuttles trialled in the British capital
After Lyon, Las Vegas, Montreal and Paris-La Defense, autonomous electric shuttles are taking over London. Throughout the month of September, Londoners were invited to trial this new transport experience. This service is the result of a partnership between Keolis Amey, the operator of the UK’s only other fully autonomous network, the Docklands Light Railway, and Queen Elizabeth Olympic Park, Here East, Our Parklife, Engie and NAVYA. A first of its kind for Keolis in the UK.

Trial adapted for Londoners
The trial took place in Queen Elizabeth Olympic Park, the sporting complex built in east London for the 2012 Summer Olympics, which has since become an iconic area of urban regeneration, combining housing, green spaces, and cultural and sporting installations. The shuttles, each accommodating up to 15 passengers, travelled on a 1km loop around the park, serving four stops and taking around 12 minutes per trip. The immediate success of the shuttles was reflected in the public’s eagerness to hop aboard - after two weeks of the trial, 1,000 passengers had already taken a ride on the new vehicles.

Multiple advanced technologies built in for secure transport
Designed by Keolis’ partner NAVYA, the London shuttles use sensors, cameras, odometry and GPS mapping to navigate a programmed route and detect obstacles in its path, day or night, all without a driver. 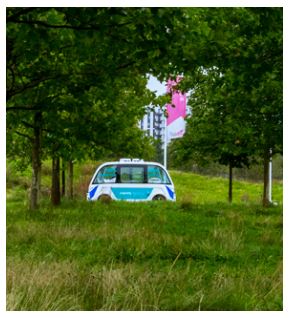 A new public transport solution for the first and last kilometres of journeys
The trial of new driverless, electric shuttles in a public sphere highlights the growing interest of cities and the Organising Mobility Authorities (AOM) in this new type of ecological, silent transport. Offering a reliable response to the first and last kilometres issue in urban centres, the shuttles can adapt to various environments such as pedestrian city centres and narrow streets.

Passenger satisfaction is met with optimal service frequency, extended servicing times and transport to more isolated areas normally not serviced by other modes of public transport. The shuttles also offer a suitable solution to passenger transport in larger sites like Queen Elizabeth Olympic Park, which aims to start using the shuttles by 2019, as well as other locations such as airports, hospitals, university campuses, tourist attractions and shopping centres.

“The challenge for future cities is developing sustainable, integrated transport networks that work for the passenger. Autonomous technology is just one of the innovations we’re exploring to help deliver this and revolutionise public transport in the UK,” said Alistair Gordon, chief executive of Keolis UK.