Our website is made possible by displaying online advertisements to our visitors. Please consider supporting us by disabling your ad blocker.
Home > Products > RF & microwave test equipment as key enabler of quantum computing
Quantum Tech

What’s the main difference between a classical computer and a quantum computer?

Classical computers and supercomputers both use digital bits to process information and perform computations. Digital bits can be in a 0 or 1 state. The key difference in quantum computing is the building block: Quantum Bits, also known as Qubits. Unlike digital bits, qubits can exist in a superposition of states. In other words, qubits can simultaneously be in a 0 and 1 state, disrupting the classical computations constrains and enabling completely new application scenarios not even conceivable before.

What challenges does quantum computing entail from a RF and microwave hardware perspective?

One key challenge pertaining the design of qubits is the research and development of device models and materials to be adopted. Once model and materials have been optimised, the next challenge is engineering and controlling the designed qubits. The RF & Microwave Test Equipment as key enabler of Quantum Computing QUBIT MANIPULATION manipulation and control of qubits’ energy states is achieved using complex nanoseconds-long electromagnetic pulses between 2 and 40GHz. Using superconducting qubits is one of the most widely adopted approach to building a quantum computer. The quantum processor is located at the bottom of a cryostat, at temperatures as low as 10mK. A big challenge is ensuring good connectivity to the chip while minimising crosstalk and other errors. At the top of the cryostat, at room temperature, the focus in on system level performance, stability, synchronisation, and, as the number of qubits increases, scalability. The qubit control system is connected to the processor through a high number of RF cables running up and down from the top of the cryostat. Attenuators and filters are used at different temperature stages of the cryostat both to minimise the heat through the cables and to reduce noise. The cryostat RF paths often also include amplifiers and circulators, to improve the signal-to-noise ratio (SNR) and to shorten measurement times. There are several cables per qubit for control and readout. Creating a 50 qubits system requires more than 120 cables. All these RF components and paths must be calibrated so that, at overall system level, the focus is on having the best possible SNR, excellent phase noise, and low latency.

What test solutions are used to calibrate the systematic errors in a quantum computer?

Test solutions are placed at the top of the cryostat, as they operate primarily at room temperature. Quantum computers include many RF paths, each with several active and passive components. A big source of error is systematic errors, well known in the RF world and removable through well-established Vector Network Analysis (VNA) error correction calibrations. Stimulus and response in the quantum world are referred to as a control and readout. Given the high number of RF channels/ paths included in a typical quantum setup, a multiport or modular VNA are ideal to optimise the calibration.

What other RF and microwave test equipment is used in a typical quantum computer?

Because qubits are stimulated by microwave pulses in the 2 to 40GHz range, often up-converters and down-converters are involved to do the qubit control. Here, Analogue and Digital Signal Generators are acting as Local Oscillators (LO) for up- and down-conversion stages or used to drive the amplifiers in the chain. The stimulus signal is typically generated with a Vector Signal Generator (VSG) either internally I/Q modulated or externally via an Arbitrary Waveform Generator (AWG). AWG are sometimes used also to provide a single-sideband modulation and drive a qubit at a frequency different from the carrier frequency provided by the VSG. The tones required for qubit read-out are generated in the same way, and all resulting carriers are combined before entering the cryogenic refrigerator. Because qubits are very sensitive to phase noise, the analogue and vector signal generator providing the manipulation signals must excel in output signal purity. Wideband and real-time spectrum analysers, as well as phase noise analysers, are used to characterise the quality of generated signals.

What states or parameters are being measured?

What is the signal flow in a typical quantum computer?

A typical quantum computer works in a closed-loop mechanism: generation of control and modulation signals, application of these to the qubits, continuous readout out of qubit status, analysis of the readout signals, and decision-making on what modulation/control signals to apply next, and so on. The typical qubit lifetime is approximately 100 us, so the feedback loop needs to operate with tough low latency requirements, typically < 1 us from readout to qubit control. Each instrument/ function block in the loop must therefore operate as fast as possible.

How is the performance of a quantum computer measured?

The performance of qubit state preparation, control, and measurement operations is assessed using a metric known as fidelity. For each of these three tasks, distinct methods to quantify the fidelity exist. In general, fidelity can be thought of as characterising how close the lab implementation of an operation is to its ideal theoretical representation. A fidelity of 1 represents a perfect implementation and a fidelity of 0 indicates a complete failure. The presence of noise, drifts, dissipation, or miscalibration can introduce errors in the implementation and thus cause the fidelity to be less than 1. The error rate characterises the amount by which the fidelity of an operation is less than 1. Techniques for efficiently and accurately estimating fidelities and error rates, especially in larger quantum processors, are an active area of research. As the fidelity achieved in current qubit technologies is too low for algorithm execution, a technique known as quantum error correction (QEC) can be used to improve the fidelity by encoding the quantum state on a larger number of physical qubits. QEC requires a minimum fidelity of the physical qubits and employs continuous cycles of qubit measurement with feedback control.

Other than systematic errors, what are the sources of error?

Quantum computing is not circuit-based, as analog classical computing, but uses a discrete set of operations performed on a discrete set of states and gives a digital output. Control and measurement errors can be thought of as digital errors appearing with some probability, a fact which underlies the ability to perform QEC. A quantum computer is affected by both analogue control errors (over/under rotation, deviation of the rotation axis), and decoherence environmental errors (random bit flips/phase changes). Qubits have an intrinsic error probability. If the error probability is sufficiently low, these errors can be detected and fixed using redundancy and parity measurements. The exact number of extra qubits required for quantum error correction depends on the probability and type of errors, but factoring 2000-bit encryption key is estimated to require 106 qubits and one day of runtime at the clock rate of existing quantum processors. In general, the lower the errors, the larger the algorithm that can be run successfully, so striving for lower error is important. State-of-the-art error rates for control and measurement are currently in the range of 10−2 to 10−6 per operation, depending on the type of operation and the physical qubit implementation.

Is there any error threshold below which a quantum computer must operate?

A general rule of thumb is that control errors below a threshold of roughly 10-4 per gate are low enough for most QEC protocols, and some can tolerate errors as high as roughly 1% per gate. A second general rule of thumb is that the larger the gate error rate, the more resources (in terms of qubits, gate operations, and measurements) are required to implement the QEC protocol, an overhead that can become very cumbersome as error rates near the threshold. A practical target for average control error rates is 10-4 per gate. Since control errors are an aggregation of many different physical error mechanisms, including decoherence mechanisms intrinsic to the qubits themselves, meeting this goal means that each error contribution should be significantly lower.

Is the test and measurements technology supporting qubits a whole new area, or developed from existing solutions?

What VNA does Anritsu offer for quantum computing?

- VectorStar (Figure 1): top-performance VNA for R&D on qubit design, model validation, materials testing, to characterise the resonant frequencies of the processor. It can assist in debugging individual quantum computing chips and help developers to run two-tone measurements to quickly determine resonant frequencies and key quality factors of the test chips (mapping the results into the coherence times of the quantum system). 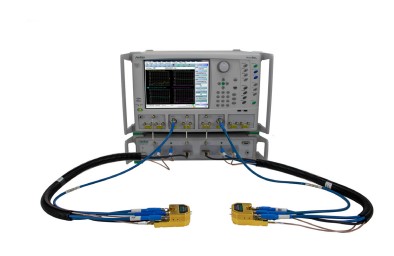 In EMEA, Anritsu partnered with Anapico, integrating the offer with:

- Anapico APMS: Multi-Channel Phase Coherent Oscillation Source. Up to 4 fully independently adjustable, phase-coherent and phase memory channels, up to 6, 12, 20, 33, and 40GHz. Ideal as RF LO to IQ modulators/ mixers and as pumping source for parametric amplifiers.

- Anapico APVSG: Multi-Channel Vector Signal Generator. Up to 4 fully independently adjustable, phase-coherent and phase memory channels, up to 6, 12, 20, 33, and 40GHz. Ideal as RFLOs to IQ modulators / mixers and to generation qubit manipulation signals.

What signal analyser does Anritsu offer for quantum computing?

- MS2850A: Spectrum/Signal Analyser with up to 1GHz wide analysis bandwidth. Thanks to its wide bandwidth and low noise floor, it is of great help in analysing the IQ modulated pulsed signals in the readout chain, and for monitoring pulse spectra.

- MS2090A: real-time premium hand-held spectrum analyser with 110MHz wide analysis bandwidth. Signal quality assessment and troubleshooting solution. Thanks to its form factor, sensitivity, and real-time capabilities, it is an incredibly valuable tool when having to detect undesired sidebands, or short and sporadic interference signals.

In EMEA, Anritsu partnered with Anapico, integrating the offer with a Phase Noise Analyser: