When designing a next-generation quantum computer, a surprisingly large problem is bridging the communication gap between the classical and quantum worlds. Such computers need specialised control and readout electronics to translate back and forth between the human operator and the quantum computer’s languages – but existing systems are cumbersome and expensive.

However, a new system of control and readout electronics, known as Quantum Instrumentation Control Kit, or QICK, developed by engineers at the U.S. Department of Energy’s Fermi National Accelerator Laboratory, has proved to drastically improve quantum computer performance while cutting the cost of control equipment. 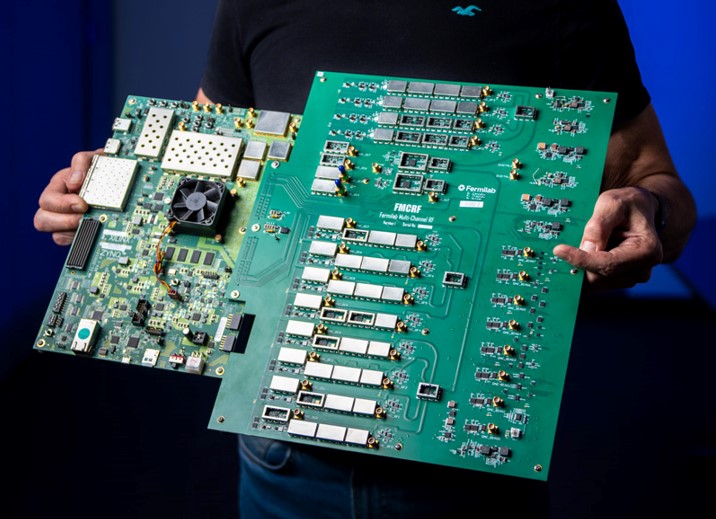 Gustavo Cancelo led a team of Fermilab engineers to create a new compact electronics board: It has the capabilities of an entire rack of equipment that is compatible with many designs of superconducting qubits at a fraction of the cost. Photo: Ryan Postel, Fermilab

“The development of the Quantum Instrumentation Control Kit is an excellent example of U.S. investment in joint quantum technology research with partnerships between industry, academia and government to accelerate pre-competitive quantum research and development technologies,” said Harriet Kung, DOE Deputy Director for science programmes for the Office of Science and Acting Associate Director of science for high-energy physics.

The faster and more cost-efficient controls were developed by a team of Fermilab engineers led by senior principal engineer Gustavo Cancelo in collaboration with the University of Chicago whose goal was to create and test a field-programmable gate array-based (FPGA) controller for quantum computing experiments. David Schuster, a physicist at the University of Chicago, led the university’s lab that helped with the specifications and verification on real hardware.

“This is exactly the type of project that combines the strengths of a national laboratory and a university,” said Schuster. “There is a clear need for an open-source control hardware ecosystem, and it is being rapidly adopted by the quantum community.”

Engineers designing quantum computers deal with the challenge of bridging the two seemingly incompatible worlds of quantum and classical computers. Quantum computers are based on the counterintuitive, probabilistic rules of quantum mechanics that govern the microscopic world, which enables them to perform calculations that ordinary computers cannot. Because people live in the macroscopic visible world where classical physics reigns, control and readout electronics act as the interpreter connecting these two worlds.

One promising technology for quantum computers uses superconducting circuits as qubits. Currently, most control and readout systems for superconducting quantum computers use off-the-shelf commercial equipment not specialised to the task. As a result, researchers often must string together a dozen or more expensive components. The cost can quickly add up to tens of thousands of dollars per qubit, and the large size of these systems creates more problems.

Despite recent technological advances, qubits still have a relatively short lifetime, generally a fraction of a millisecond, after which they generate errors. “When you work with qubits, time is critical. Classical electronics take time to respond to the qubits, limiting the performance of the computer,” said Cancelo.

To address this issue, Cancelo and his team at Fermilab designed a compact control and readout system. The team incorporated the capabilities of an entire rack of equipment in a single electronics board slightly larger than a laptop. The new system is specialised, yet it is versatile enough to be compatible with many designs of superconducting qubits.

“We are designing a general instrument for a large variety of qubits, hoping to cover those that will be designed six months or a year from now,” Cancelo said. “With our control and readout electronics, you can achieve functionality and performance that is hard or impossible to do with commercial equipment.”

The control and readout of qubits depend on microwave pulses – radio waves at frequencies similar to the signals that carry mobile phone calls and heat up microwave dinners. The Fermilab team’s radio frequency (RF) board contains more than 200 elements: mixers to tweak the frequencies; filters to remove undesired frequencies; amplifiers and attenuators to adjust the amplitude of the signals; and switches to turn signals on and off. The board also contains a low-frequency control to tune certain qubit parameters. Together with a commercial field-programmable gate array, or FPGA, board, which serves as the “brains” of the computer, the RF board provides everything scientists need to communicate successfully with the quantum world.

The two compact boards cost about 10 times less to produce than conventional systems. In their simplest configuration, they can control eight qubits. Integrating all the RF components into one board allows for faster, more precise operation as well as real-time feedback and error correction.

“You need to inject signals that are very, very fast and very, very short,” said Fermilab engineer Leandro Stefanazzi, a member of the team. “If you don’t control both the frequency and duration of these signals very precisely, then your qubit won’t behave the way you want.”

Designing the RF board and layout took about six months and presented substantial challenges: adjacent circuit elements had to match precisely so that signals would travel smoothly without bouncing and interfering with each other. Plus, the engineers had to carefully avoid layouts that would pick up stray radio waves from sources like cell phones and Wi-Fi. Along the way, they ran simulations to verify that they were on the right track.

The design is now ready for fabrication and assembly, with the goal of having working RF boards this summer.

Throughout the process, the Fermilab engineers tested their ideas with the University of Chicago. The new RF board is ideal for researchers like Schuster who seek to make fundamental advances in quantum computing using a wide variety of quantum computer architectures and devices.

“I often joke that this one board is going to potentially replace almost all of the test equipment that I have in my lab,” said Schuster. “Getting to team up with people who can make electronics work at that level is incredibly rewarding for us.”

The new system is easily scalable. Frequency multiplexing qubit controls, analogous to sending multiple phone conversations over the same cable, would allow a single RF board to control up to 80 qubits. Thanks to their small size, several dozen boards could be linked together and synchronised to the same clock as part of larger quantum computers. Cancelo and his colleagues described their new system in a paper recently published in the AIP Review of Scientific Instruments.

The Fermilab engineering team has taken advantage of a new commercial FPGA chip, the first to integrate digital-to-analogue and analogue-to-digital converters directly into the board. It substantially speeds up the process of creating the interface between the FPGA and RF boards, which would have taken months without it. To improve future versions of its control and readout system, the team has started designing its own FPGA hardware.

The development of QICK was supported by QuantISED, the Quantum Science Centre (QSC) and later by the Fermilab-hosted Superconducting Quantum Materials and Systems Centre (SQMS). The QICK electronics is important for research at the SQMS, where scientists are developing superconducting qubits with long lifetimes. It is also of interest to a second national quantum centre where Fermilab plays a key role, the QSC hosted by Oak Ridge National Laboratory.

A low-cost version of the hardware is now available only for universities for educational purposes. “Due to its low cost, it allows smaller institutions to have powerful quantum control without spending hundreds of thousands of dollars,” said Cancelo.

“From a scientific point of view, we are working on one of the hottest topics in physics of the decade as an opportunity,” he added. “From an engineering point of view, what I enjoy is that many areas of electronic engineering need to come together to be able to successfully execute this project.”