Today’s microprocessor-based systems require power sources that deliver high current and ultra fast transient performance, with tight regulation. This creates a need for cost effective, compact capacitors with high capacitance values. Electrolytic capacitors are the solution of choice but it’s important to go beyond specifying capacitance and voltage to consider Equivalent Series Resistance (ESR) as a figure of merit.

ESR: Easier to define than specify 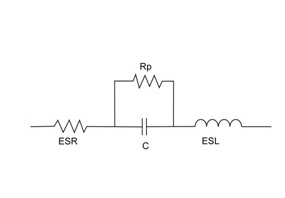 ESR is frequency-dependent, temperature-dependent, and changes as components age. It is usually only an important consideration in selecting electrolytic capacitors.

Constructing the capacitor
‘Wet’ aluminium electrolytic capacitors have an anode plate comprising an electrochemically-etched aluminium foil, a dielectric formed as an oxide layer on this foil, a paper spacer to hold conductive fluid that forms the cathode, and a second foil that connects the electrolyte and the device’s terminal. 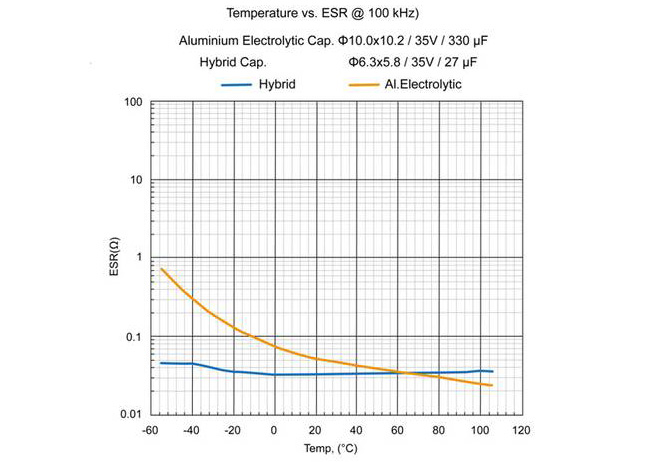 Fluid electrolyte penetrates the pores of the oxidised anode foil, so contact area, and hence capacitance, are maximised.

The electrolyte’s temperature-dependent conductivity is a major contributor to ESR. Ohmic losses produced by the aluminium oxide layer are frequency-dependent, reducing as frequency increases. Fluid electrolyte is lost over time by vaporisation and diffusion, causing a gradual reduction in the amount of conducting material, reducing the contact area, increasing the ESR and reducing capacitance.

This 'drying out' process is temperature dependent and accelerates in components used at higher temperatures or subjected to higher ripple currents, which dissipate more heat as part of their circuit function.

In aluminium electrolytics, ESR falls as temperature increases - its effects reduce as assemblies warm up.

Drying out is irrelevant in solid aluminium electrolytics, or ‘hybrid’ capacitors, where a polymerised organic semiconductor material replaces liquid electrolyte. This technology exhibits a specific conductance of around 10,000 times that of a liquid electrolyte. As Figure 2 (above) shows, overall equivalent series resistance is reduced substantially, most significantly at low temperatures.

Tantalum technology
Tantalum electrolytics have tantalum anodes of either sintered powder, or plain or etched foil. The insulator is an oxide layer on the anode surface. In foil devices the second conductor is an electrolyte held in a spacer. A deposit of manganese dioxide covers the oxide layer in solid versions.

The component’s terminations are substantial contributors to ESR. In a solid capacitor the manganese dioxide is commonly covered with carbon and then a metal such as silver, which is soldered to the negative lead or case. In the foil style, the positive connection is a welded nickel or steel wire connected to a tantalum wire on the anode. Such devices also contain a second tantalum foil in contact with the electrolyte.

At low frequencies, the oxide losses are most significant. But their contribution decreases inversely with frequency, eventually becoming small compared with the contact material resistance (Figure 3, below). 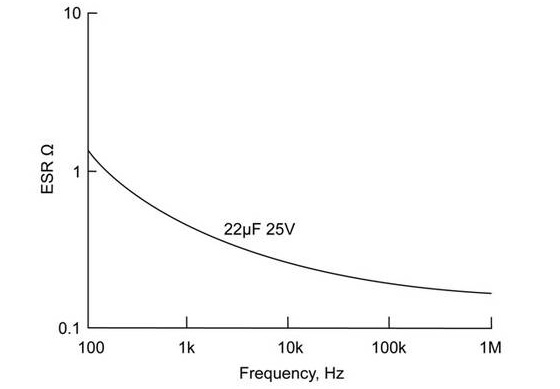 Why is ESR important?
Electrolytic capacitors are used as input buffers to supply energy when the mains input voltage is too low, store energy while an AC/DC converter adapts to a new power level, and prevent switching noise from the converter reaching the power source. On the output of a converter, they act as a filter and current sink for inductive elements, and, in DC/DC conversion, function as an energy buffer when the power output demand changes.

In both cases, losses due to ESR will inhibit a capacitor’s ability to quickly source or sink charge. At the input, increasing ESR increases high frequency noise across the capacitor, decreasing filtering effectiveness. At the output, higher ESR causes more ripple, influencing stability of the control loop.

ESR is particularly important in applications with low duty-cycle, high frequency current pulses. Here, the ripple voltage due to the ESR will be greater than expected based on capacitance alone, although the negative correlation of ESR with temperature means that ripple decreases as the assembly warms up.

Also, the introduction of a resistive element into what designers may assume is a purely reactive circuit can lead to unexpected shifts in phase response, again affecting stability.

What can be done?
Some capacitors are designed specifically for low-ESR, but manufacturers of aluminium electrolytic capacitors do not specify ESR consistently. The value at 25°C and 100kHz is commonly quoted, with a formula provided to calculate the value at the operating frequency. Some suppliers specify at 120Hz; others leave the designer to calculate the figure at the frequency of interest from the dissipation factor (tan∂) and specified maximum ripple current. Furthermore, for capacitors of comparable size and CV, a device with higher capacitance and lower voltage rating will have lower ESR and ESR tends to be lower for aluminium electrolytic devices with long, thin cases because the resistance of the foil is reduced. Larger overall case sizes can cut ESR too.

Also, several smaller-value components can be used in parallel to achieve lower high-frequency ESR, at the expense of board space. An analysis of some of the most popular low-ESR components can be found in Figure 4 (see below), which includes links to full product series and datasheets. The choice is varied, requiring detailed analysis of data sheets, or advice from a specialist, such as Avnet Abacus, to make an informed selection.

But low ESR is not always the primary consideration and, in a development outside of electrolytic devices, Murata has actually increased ESR of some of its multilayer ceramic chip capacitors, in order to control unwanted resonances that can reduce the decoupling performance at peak frequencies.

Conclusion
There has never been a more diverse range of electrolytic technologies for engineers to choose from. For power applications in particular, the data printed on the component is rarely sufficient to make an informed choice. Talking to an independent specialist that can offer components from a selection of the world’s largest capacitor manufacturers is the surest and quickest route to finding the most appropriate device for any given application.