Since the 1990s, the external power supply has been the target of a series of regulations that are gradually being tightened around the world. Don Schriek, product marketing manager, Power EMEA, Avnet, examines what applies and where

Although there is international agreement on many aspects, regions have opted for different forms of legislation. The US, for example, has recently introduced mandatory standards but the European Union (EU) is operating a voluntary code of conduct, based on an older set of specifications. 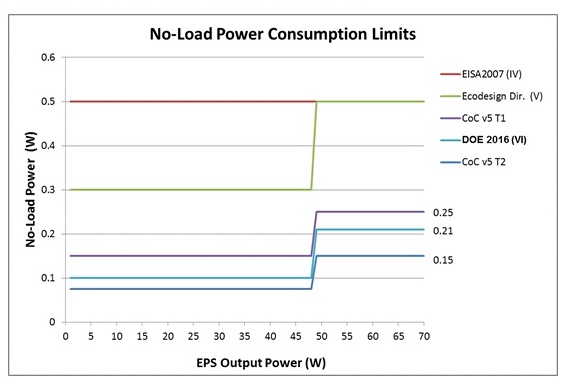 The efficiency standards for external power supplies began at the end of the 1990s, when research in the US indicated there were more than one billion products with these supplies in operation. Most employed linear conversion techniques with efficiencies as low as 50%. Although such supplies tend to draw low levels of current, as they may be plugged into a wall socket, significant amounts of energy can be drawn during that time and wasted as heat. Experts at the time calculated that this ‘vampire’ power could account for as much as 30% of domestic electricity consumption.

Efficiency regulations
The US Environmental Protection Agency created a voluntary effort to improve efficiency. The first mandatory regulations did not appear until the mid-2000s, focusing on the energy drawn by external power supplies when the load is inactive. Since then, the regulations brought in by various governments around the world have progressively tightened specifications, with different regions occasionally leapfrogging each other. The most recent lay in changes made by the US Department of Energy (DoE) to its EISA 2007 efficiency standard for external power supplies. The DoE published the changes in early 2014; they became mandatory on 16 February 2016.

As with earlier standards on external power supplies, the revised EISA 2007 specification follows the limits set by the International Efficiency Mark (IEM) scheme developed by the US Environmental Protection Agency as part of the Energy Star programme.

Having performed the measurement, the manufacturer identifies the most appropriate IEM level for the power supply. The mark comprises a Roman numeral that corresponds to specific active and no-load power-consumption levels, as well as a power factor requirement that was introduced for IEM Level V. The current US regime corresponds to Level VI. The requirements for Level VII have yet to be specified.

The EU EcoDesign Directive corresponds to Level V of the IEM. The active-mode requirements specified by the EU’s revisions to its later, and voluntary, Efficiency of External Power Supplies Code of Conduct were influenced by continuing work on the IEM specifications. The mandatory European Ecodesign Directive for External Power Supplies is currently undergoing a revision process and is expected to harmonise with much of the US standard, if not completely. History indicates that Canada, Australia and New Zealand, among others, are likely to harmonise as well.

Level III
The move from the Level III standards to the Level VI grade required in the US market has pushed active-load efficiency ratings higher, with small changes in the boundaries between power limits. At Level III, a power supply with a maximum load rating of more than 50W and up to 250W had to be 84% efficient or better, based on the average of the four different load measurements. Level VI has increased the required efficiency to 88% for single-voltage supplies operating between 49 and 250W when the load is active.

One of the most important changes in the move from Level V to Level VI is the reduction in no-load power consumption for single-output AC/DC power adapters able to deliver up to 49W. At Level V, such external power supplies could not draw more than 0.3W, Level VI sees the limit cut to just 0.1W. Level VI also introduces differences between single- and multiple-voltage external power supplies. All multiple-voltage adapters must have a no-load consumption of no more than 0.3W.

Furthermore, the Level VI standards draw a distinction between direct- and indirect-operation supplies. The difference means that, in the case of a load that cannot operate without a battery being present – an indirect-operation device – it is regulated by the original EISA 2007 standard.
Another exception is for products that need approval from the US Federal Food and Drug Administration (FDA), such as medical devices. The medical environment has much more stringent requirements. External power supplies are considered to be, in effect, standalone medical devices. The power supply manufacturer needs to provide a full risk assessment and accompanying documentation that follows the procedures laid out in the ISO 14971 standard.

As many manufacturers will want to sell the same core product in different territories, the simplest approach will be to design and specify to the most stringent mandatory standard. Suppliers can use the improved specifications of their products in regimes with looser regulation as a way of providing competitive differentiation. The introduction of a tighter standard in one large region can be seen to have a long-term effect on the technology supplied into all of the others, so it pays to keep abreast of developments in the IEM.