Hybrid capacitors combine technologies to get the best of both worlds

Supercapacitors are commonly used wherever a quick energy boost is needed, as an alternative to a rechargeable battery. The most prevalent type of supercapacitors, EDLCs (Electrical Double Layer Capacitors), provide thousands or tens of thousands of times the capacitance of normal capacitors while their energy density makes them ten times smaller than batteries (more here about how EDLCs work in detail).

However, while EDLCs offer high capacitance, excellent power density and impressive efficiency, there are a few inherent properties which aren’t as desirable for some applications.

For example, most devices exhibit a characteristic called self-discharge, which means that if not discharged after a short time, the stored energy will leak away. The effect is particularly pronounced at high temperatures. Both leakage current and ESR (Equivalent Series Resistance) can also exclude EDLCs from certain applications. The alternative, a secondary Lithium Ion (Li-ion) battery, offers higher energy density with reduced self-discharge, but they effectively wear out after a number of charge/discharge cycles. They also suffer from safety-related concerns such as thermal runaway, which can be catastrophic.

There is another device type on the market which combines the best features of EDLCs and Li-ion batteries. Called Li-ion capacitors, or hybrid capacitors, they are effectively a combination of the two technologies. While EDLCs hold energy using electrostatic charge, and Li-ion batteries use an electrochemical method, Li-ion capacitors use one electrostatic electrode and one electrochemical. The result is a device with better energy density than an EDLC, but without the self-discharge characteristic, and higher durability (more charge-discharge cycles) than a Li-ion battery, without the potential for dangerous thermal runaway. 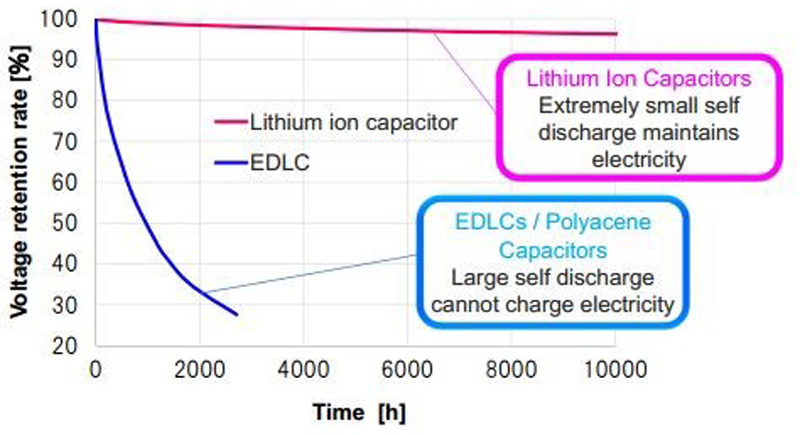 Compared to a Li-ion battery, in which the ions are inserted or extracted (intercalated or deintercalated) into the carbon lattice, ions in the Li-ion capacitor are simply adsorbed or desorbed on the electrode surface, there is no crystalline change taking place. This gives Li-ion capacitors a big advantage over batteries in terms of the number of charge/discharge cycles they can withstand, similar to the longevity of EDLCs. Li-ion capacitors also do not contain oxygen or oxides, so they are not prone to thermal runaway conditions. This makes them a safer alternative to Li-ion batteries. A full comparison table between the technologies is shown below. 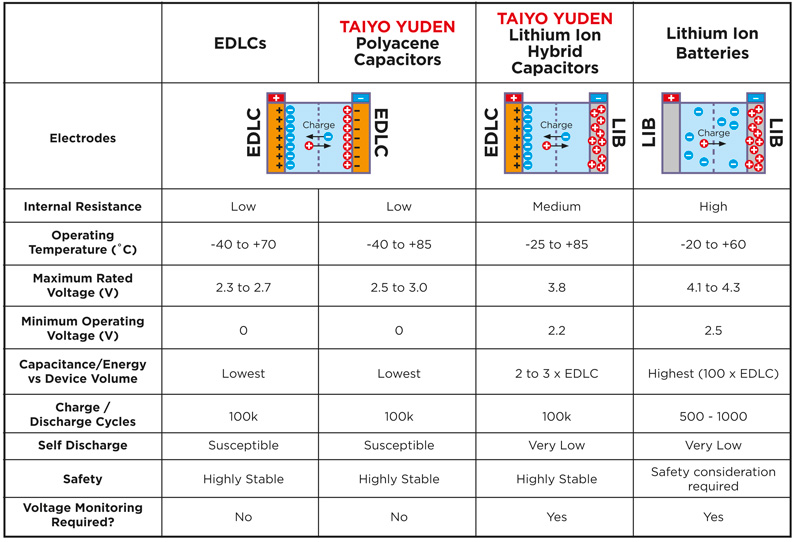 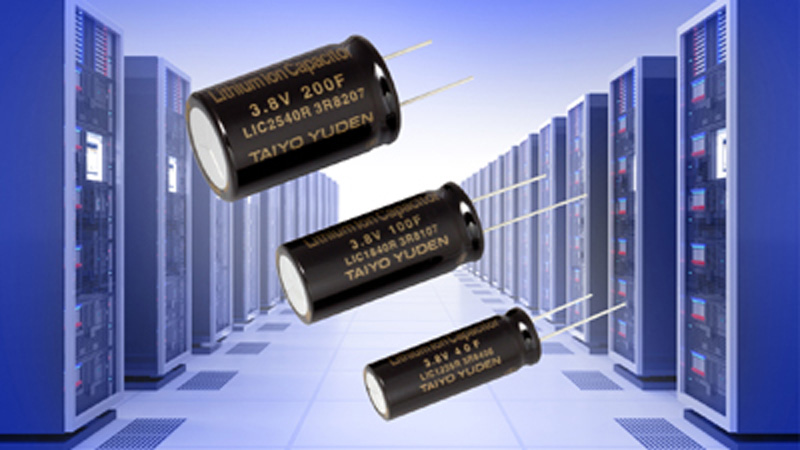 The different properties of EDLCs, Li-ion batteries and Li-ion capacitors suits each technology to various different applications. Li-ion capacitors are well suited for applications that demand high energy density, high power density, low leakage, longevity, durability and safety, as well as anywhere where the operating temperature is too high for efficient operation of EDLCs. This can include backup power sources for memory and other ICs, auxiliary power devices for energy-saving purposes (such as rapid drum heating in copiers and on start-up for projectors) and automotive electronics which are subject to harsh temperatures.

A key application area for Li-ion capacitors is power supplies for energy harvesting devices, as they are quickly rechargeable, lightweight and don’t self-discharge. They can store the energy generated and produce it quickly when, say, wireless transmission is needed. Since they don’t wear out, the maintenance cost for changing coin cell batteries is eliminated. We expect to see many new types of small energy-harvesting applications enabled as a direct result of this exciting technology.