The release of the Thunderbolt 3 has been announced by StarTech.com as the company’s first Dual-4K Docking Station with full Power Delivery (SKUs: TB3DK2DPPDUE) to charge and power the latest generation MacBook Pro or Thunderbolt 3 equipped Windows laptops. This docking station adds to StarTech.com’s growing line of Thunderbolt 3 products.

Not only is this one of the first Thunderbolt 3 docking stations on the market with laptop charging, it also comes with a USB-C to DisplayPort cable. The extra cable gives the user instant ability to connect to an additional DisplayPort monitor, without having to purchase extra cables or adapters. 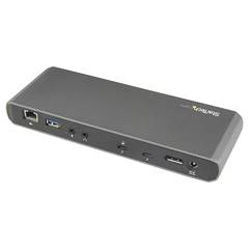 Highlights of the new docking station are:

Thunderbolt 3 brings Thunderbolt to USB-C at speeds up to 40Gb/s, creating one compact port that does it all – delivering the fastest, most versatile connection to any dock, display, or data device. For the first time, one computer port connects to Thunderbolt devices, every display, and billions of USB devices. A single cable now provides four times the data and twice the video bandwidth of any other cable, while also supplying power.