High lumen density LED arrays are fast becoming the technology of choice for downlights and directional lighting in smart buildings, whether for retrofit or new build applications.  Addressing the thermal management challenge presented by these devices can be relatively simple.  Alan Jermyn, V.P. European Marketing at Avnet Abacus, explains.

Intelligent LED lighting can save more energy in smart buildings than any other system, including HVAC, according to industry experts.  Strong growth, especially in Europe, is driven partly by the promise of cost savings, and boosted by green building regulations and Government incentives.  With the recent introduction of the newest generation of high-density LED arrays, one of the few remaining perceived barriers to switching to LED technology, is crumbling.

It has been a challenge for LED manufacturers to demonstrate that LED lumen output can match or exceed incumbent technologies.  But success has come with the latest chip-on-board (COB) LED arrays from leading LED manufacturers including Philips Lumileds, Sharp, Bridgelux and Cree,.  In addition, these higher lumen density COB LED arrays can reduce design complexity as well as manufacturing and installation costs. This makes them ideal for downlights and directional lighting fittings, in both new build and especially retrofit applications.

COB LED arrays appeal to lighting manufacturers because overall system design becomes much simpler, in terms of LED drivers and electronic controls, as well as mechanical assembly.  However, these high lumen density arrays bring design challenges of their own, particularly in the areas of electrical and thermal interfaces.  For compact luminaires used in directional lighting fixtures or downlighting, it is not just the LED array that needs careful selection, in terms of lumen output, colour temperature and CRI, but also the connection of the array to the cooling components.

Smooth is cool
Typically, COB LED arrays require an appropriately specified heat sink to avoid excessive LED junction temperatures that can damage the array.  The size and specification of the heat sink depends on many factors, including the operating environment of the final application.  A checklist is provided by Avnet Abacus here.  Manufacturers recommend looking for devices with a top surface that is as smooth and flat as possible.  Cree, for example, recommends a heat sink with an average roughness value (Ra) of less than 10µm.  This is typically achieved by finishing the heat sink surface by polishing or milling, for example.

A wide range of heat sinks in a variety of form factors produced by several key suppliers is available from Avnet Abacus.  The range from Fischer, for example, features a number of styles suitable for LED lighting applications.  This includes star shaped, round and pin heat sinks.  For specialist applications, customer specific LED heat sinks can be sourced.

Aavid Thermalloy is another popular brand among LED lighting designers.  A wide range of standard designs is available, with extruded versions for LED footprints 40mm and larger.

Holding on
Although some LED arrays can be mounted directly onto the heatsink, it is considered preferable by some manufacturers to install them into a special holder before being mounted onto the heatsink.  The holders simplify the mechanical fastening and can help with aligning a secondary optic with the light-emitting surface.  Holders also ensure that sufficient clamping force can be applied to the LED, without damaging it, when attaching it to the heatsink.  Finally, because a holder covers the LED’s electrical connections, it simplifies the safety and regulatory certification process.

There are, of course, dimensional and structural differences between the COB LED arrays from different manufacturers, and within the ranges from a single vendor.  Ceramic substrates can be thinner and more brittle than metal-based substrates, and thicknesses will vary.  To date, LED holders have tended to be dedicated to a particular array or family of arrays.

TE Connectivity, however, has designed a scalable interconnect device that forms a platform solution such that it can be easily adjusted to accommodate arrays from a number of the major manufacturers.  The TE Scalable LED socket connector is a solderless array holder, suitable for Philips Lumileds LUXEON CoB devices, Sharp Zenigata arrays (See Figure 1) and Cree CXA arrays. 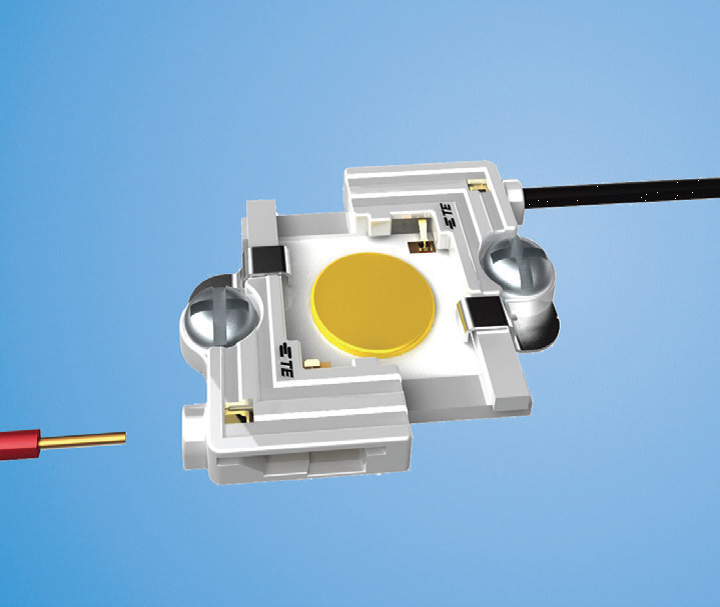 It can be supplied as a two piece corner configuration, or alternatively as a one piece assembled unit.  It facilitates direct attachment of the LED array to the heat sink using a standard screw.  It can be used with a variety of thermal insulated materials (see below), and with rounded corners, and is designed to minimise any obstruction of the LED light output.  Importantly, it retains access to the COB temperature test point for verification purposes.

TE offers additional LED holders to suit other Philips Lumileds LUXEON families, including the LUXEON-H, LUXEON-S and LUXEON-K ranges.  The Type LK holder, for example, is designed to scale with all sizes and models of the LUXEON-K emitter.  See Figure 2.  The solderless LED socket includes a metal spring connector designed to provide a reliable electrical contact.  It uses TE’s ‘poke-in’ wire termination scheme.  The selected heatsink needs to be drilled to accommodate the socket screws. 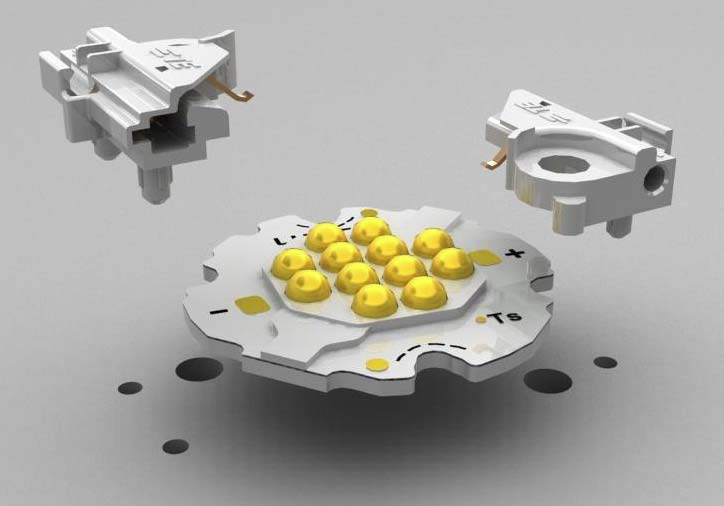 TE’s Z32 and Z50 holders are designed for low profile applications for the Sharp Mini and Mega Zenigata ranges respectively. The holders allow direct attachment of the LED to a cooling device, while the poke-in termination method is used to electrically connect the LED. Two clamping springs ensure the LED is firmly held in the holder, while the holder itself is screwed to the cooling device.

Alternatively, Molex offers dedicated LED holders to accommodate arrays from Sharp, Bridgelux and Cree, among other vendors. The 180150 and 180180 holders are designed for Bridgelux LED arrays. They simplify the installation process and reduce installation time using compression contacts that eliminate hand soldering. These holders have a double-ended wire-trap terminal to attach the power source. The thermoplastic housing supports high temperatures.

Finally, the Molex Series 180330 and 180390 LED array holders are designed specifically for the Sharp Mega and Mini Zenigata arrays (see Figure 3). These arrays are targeted at small fixture applications such as downlights and directional lighting. The compression contacts, deliver power to the array and there is a screw mount attachment for securing the array to the heatsink, avoiding the corners of the array. This provides voltage isolation between the LED and the heatsink. Importantly, the holders allow for easy field replacements and upgrades, if necessary. 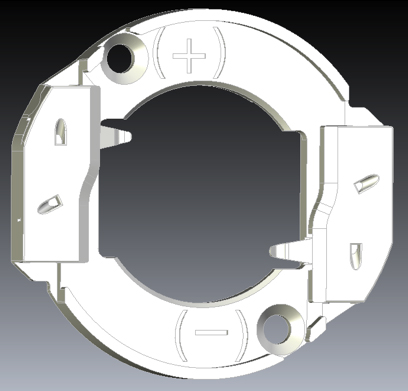 When mounting an LED array and holder onto a heatsink, it is recommended to use a thermal insulating material (TIM). Many forms are available, including thermally conductive adhesives, grease or pastes, or insulating sheets. This is especially important for the higher performance LEDs. Even the tiniest gaps between heatsink surface and the base of the array can lead to thermal resistance, degrading the performance of the heatsink, and potentially leading to overheating and failure of the array.

If adhesive, grease or paste is used, it must be spread thinly (typically less than 100µm) and uniformly across the surface. Thermal sheets should typically be less than 0.3mm. Cree recommends thermal grease or a thermal pad. Philips Lumileds has successfully tested a number of options, including graphite sheets and thermal joint compounds.

Avnet Abacus offers a wide range of thermal management materials from a number of manufacturers, including graphite sheets, gels and thermally conductive pastes from vendors including Aavid Thermalloy, Fischer and Panasonic.

Chip on Board (COB) LED arrays are a popular choice for downlighting and directional lighting installations in smart buildings, especially now that higher lumen output devices are available in compact formats. However, although the overall design of such luminaires is much simplified with these arrays, special consideration has to be given to thermal management.

Installing the array into a connecting holder, which is then mounted onto the heatsink using thermally conductive adhesive, paste or other thermal insulating material (TIM), can greatly simplify the build process, and ensure an effective thermal path to ambient for optimum reliability.