The drive for creation of a suite of new features and capabilities from Prima Power Laserdyne called SmartTechniques has been provided by the availability of high power fibre lasers. This new technology increases the productivity, quality and capability in laser welding as well as in laser cutting and drilling. Both the CW (continuous wave) and QCW (quasi-continuous wave) sources provide a combination of wavelength, beam quality, and power to make existing processes better and/or faster.

Another feature of these solid-state laser sources is the speed and precision with which laser parameters can be controlled.

To capitalise on these developments, Prima Power Laserdyne has applied its applications and design engineering resources to develop new capability for controlling the fibre laser welding process and for increasing the quality of laser welds.

While these new capabilities can be applied to laser systems having a wide range of high power industrial lasers, SmartTechniques’ value becomes greatest when applied to high power fibre laser based systems.

SmartRamp provides precise control of the laser process to prevent defects at the start and end of a weld
With standard laser welding practice, the laser power is ramped down at the end of the weld after the start point has been over lapped. This method leaves an undesirable depression at the end points.

Photo One and Two: SmartTechniques from Prima Power Laserdyne includes SmartRamp to prevent defects at the start and end of a weld. Photo One shows result from a conventional laser welding process with an end point defect in the 1’oclock position resulting from laser power ramping. Photo Two shows no defect resulting from the SmartRamp process.

For most applications, this depression is undesirable but has been considered 'just the way it is' for laser welding. This commonly accepted condition can have serious consequences. For example:

Using SmartRamp, the laser parameters are controlled in conjunction with the motion to prevent the depression at the end of the weld, as shown in (Photo Two)

A good weld is crack and porosity free and has high strength and reliability. There are a number of process parameters that affect the quality, size and properties of laser welds. Quality welds produced with SmartRamp are characterised by reduced porosity at the end of the weld and, more importantly, with consistent crown and less undercut of the top bead. 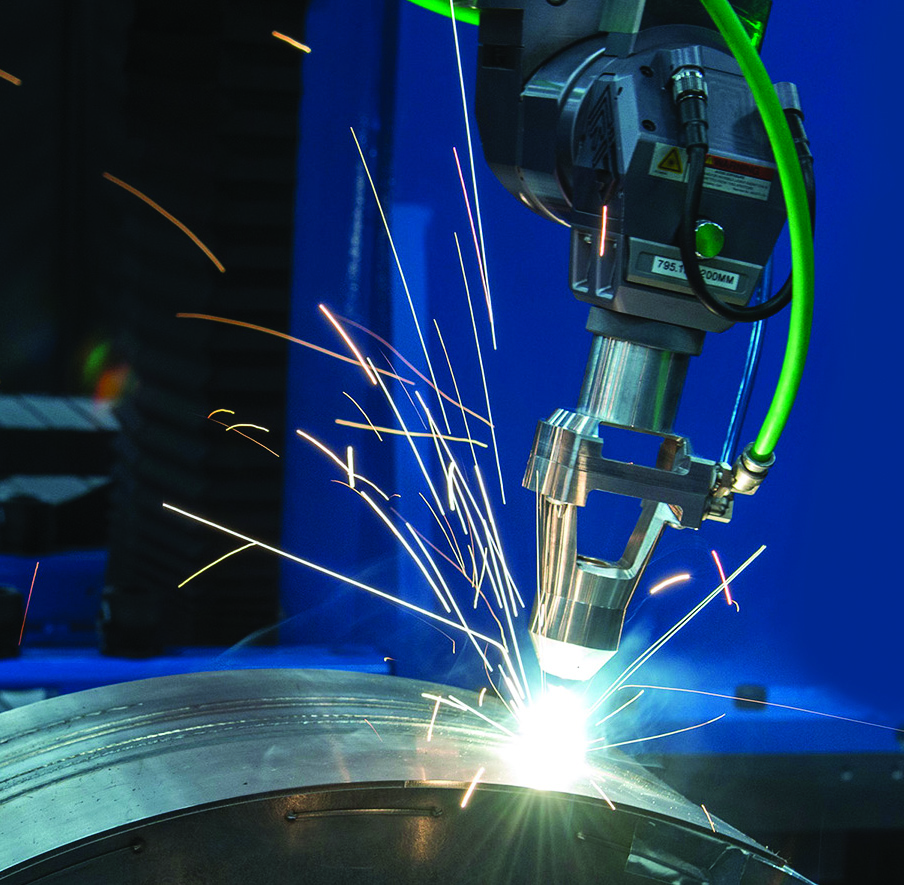 In addition, SmartShield provides a controlled atmosphere for the weld zone while it is molten and while it is cooling to a temperature at which it will no longer be affected by the ambient atmosphere. SmartShield is available with a range of shield gas delivery devices including welding shoe, side jets and coaxial gas nozzle tips (Photo Three) that best fit the material and weld joint design.

A major difference between SmartShield and other air-knife designs is that the gas from the cross-jet does not contaminate or otherwise interfere with the welding shield gas. SmartShield also makes use of a different, lower cost gas (regular, compressed shop air) for protecting the lens coverslide than the typically more expensive shield gas used to protect the weld from oxidation.

An important benefit of the design of the focusing lens/shield gas assemblies for laser welding is that they can be quickly changed to vary the focused spot size or to change from welding to cutting or drilling.