As a youth, all those space launches and missions captured my imagination.

I wanted to be an astronaut and go on exotic trips throughout the cosmos.

I recall seeing Bruce Dern in Silent Running (1972) protecting all the remaining plant life that was left on Earth after ecological destruction. As a botanist, he would not be denied from protecting the last vestiges of organic plant life so that one day the earth could be reforested.

More recently I saw The Martian (2015) where NASA astronaut Mark Watney, portrayed by actor Matt Damon, is stranded alone on Mars. To provide food for himself, he goes to Herculean efforts to grow potatoes. His amazing resourcefulness to see it through and make life flourish in the most inhospitable environment imaginable mark one of the high points of the film (Figure 1). 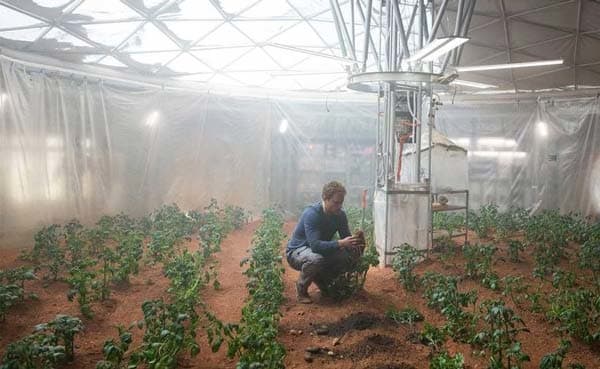 Recently, physicist and cosmologist, author Stephen Hawking stated that humans have perhaps 100 years left before over-population, climate change, nuclear war, viruses, or AI wipe us out. Holding out a rather pessimistic view of our future Hawking said: “If humanity is to continue our future lies in boldly going where no else has gone before.”

Vertical farming in 3D spaces
Back here on earth, vertical farming is an agricultural technique that takes advantage of growing crops in three-dimensional space by incorporating stacks of vertical ascending plant troffers to grow crops greatly increasing output relative to traditional two-dimensional crop raising techniques. Vertical farming is done indoors in closed environments. Vertical farming concepts are ideally suited for space applications where in the future humans would desire to grow crops on spacecraft. This closed environment would require maximising space optimisation. Vertical stacks of crops would greatly increase the production of crops relative to the traditional approaches that Dern (Lowell) and Damon (Watney) used.

As Matt Damon demonstrated in The Martian, duct tape is invaluable in fixing things. However, if I were to begin planning to build a farm within a space transport craft, I would welcome new intelligent electronic component solutions that provide various environmental data assisting with the sensing, measurement, and analysis of all relevant details. This may include but is not limited to environmental factors such as humidity, temperature, light, and potential of Hydrogen (pH).

Tasked with the responsibility to put together an intelligent analogue solution for outer space travel and to develop a vertical farm to grow and sustain crops an engineer would be prudent to consider sensing solutions from Analog Devices (ADI). ADI is the leading global high-performance analogue technology company dedicated to solving the toughest engineering challenges. They enable customers to interpret the world around us by intelligently bridging the physical and digital with unmatched technologies that sense, measure, power, connect and interpret.

Lighting is key
One of the main dilemmas in Silent Running was that the plants were dying due to lack of lighting. Since lighting is key for plant health and growth the Analog Devices EVAL-CN0397-ARDZ Evaluation Board, which features the Arduino shield footprint and helps designers rapidly prototype the CN0397 Smart Visible Light Recognition and Detection System makes great sense. The CN0397 Smart Visible Light Recognition and Detection System identifies the visible light spectrum (red, green, and blue) and measures its intensity. The light feedback enables designers to control the amount of red, green, or blue light sent to plants or seedlings, depending on the plant’s growth stage.

Remember all the work that Matt Damon had to do to get his potatoes to grow in The Martian? If he had a product to make complete soil moisture measurements, state the pH, and provide him with temperature measurements, he would have been well on his way to early success. The Analog Devices EVAL-CN0398-ARDZ Evaluation Board features the Arduino Shield form factor for rapid prototyping of the CN0398 Smart Agriculture pH and Soil Moisture Measurement system. Because water is so precious in space, growers must be able to take immediate action to save water. The CN0398 Smart Agriculture pH and Soil Moisture Measurement system makes two critical measurements when it comes to the health of plants. This system takes measurements in the soil to determine when to water and which nutrients need to be added to balance the pH for optimal plant growth.

Vertical farming is growing in interest. If humanity is to travel and explore deep space, intelligent analogue solutions become necessary ingredients to ensure humanity employs smart agricultural practices in places of extremely limited resources and artificially controlled environments. Vertical farming is a way to farm against the grain and blast off into a yet unknown and realised future, with the hope that technology aids in the harvests of tomorrow.

A selection of Mixed Signal/Analog articles for further reading