According to latest research, the market for MEMS microphones and ECMs, micro-speakers and audio ICs will be worth $20bn in 2022. Compared to 2006, the audio business is about to experience profound changes. When Yole Développement (Yole), part of Yole Group of Companies released its first microphone report in 2006, the MEMS microphone industry was at the early stage, with emerging players and applications. The 'More than Moore' market research & strategy consulting company was announcing a $116m market for 260 million units.

Today, market figures are at another scale. Therefore, 2017 volume will reach the 5 billion units milestone for a market value over $1bn.

Microphone has become a key technology for major MEMS and semiconductor companies. Knowles, Goertek, AAC as well as new comers such as Vesper are part of today’s landscape.

Yole Group of Companies proposes a deep understanding of the audio industry with a collection of reports: Acoustic MEMS & Audio Solutions report reviews the complete evolution of the audio world including MEMS microphones, ECMs, micro-speakers and audio ICs since 2010.

The Knowles MEMS Microphones patent-to-product mapping details the main patented features of Knowles’ device embedded in iPhone 7 Plus. Mixing data from System Plus Consulting’s teardown and KnowMade’s IP analysis, this report makes the connection between the features of Knowles technologies and its patent portfolio. The report also reviews Knowles’s patent landscape and the IP litigations involving patents identified in the Patent-to-Product mapping analysis. 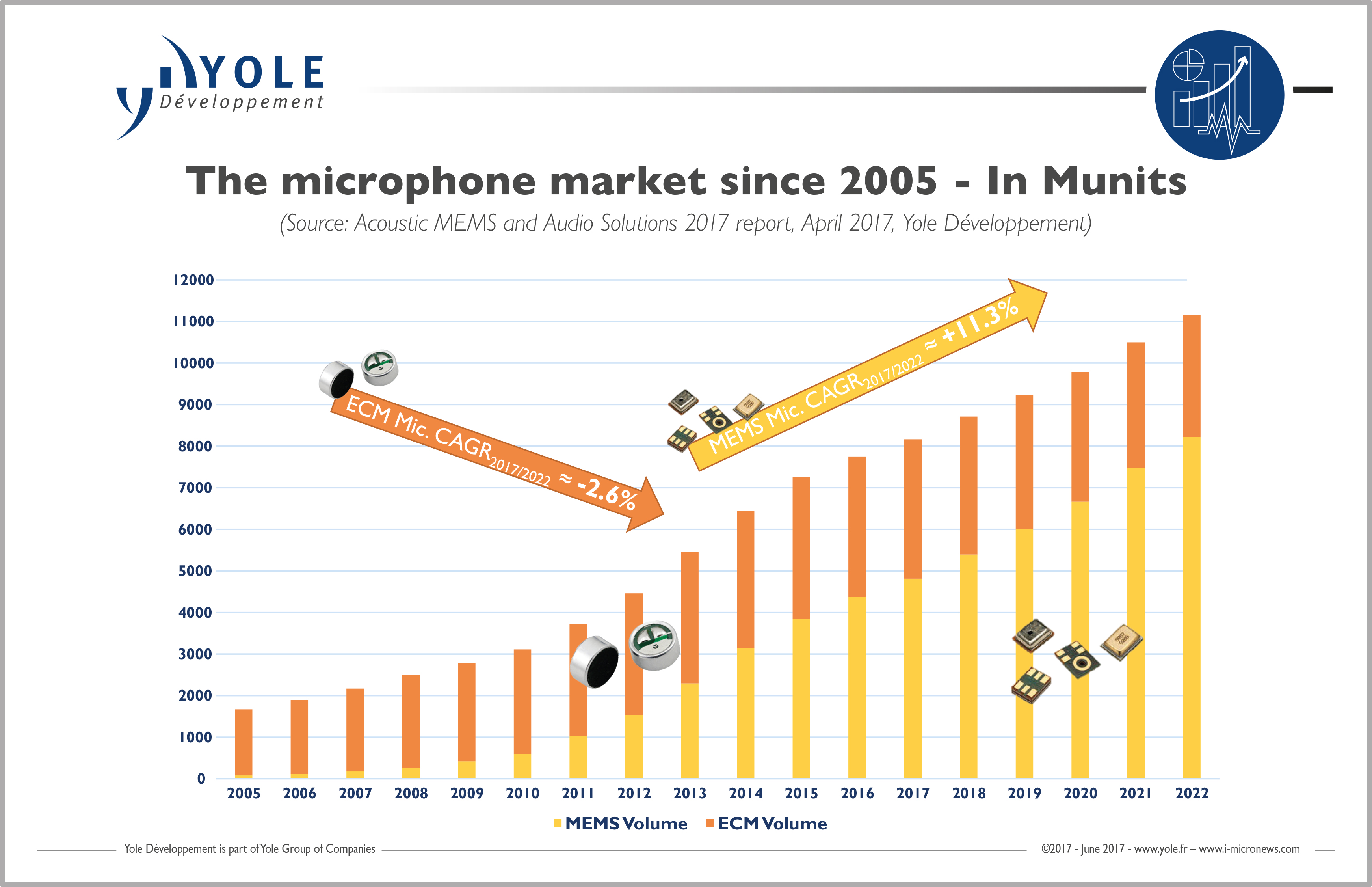 Audio is becoming a key function of multiple existing and new products that increasingly has to be analysed as a complete landscape compared to independent devices. “From mobile phones to cars, from home assistants to drones, audio products like microphones, speakers and audio ICs are essential for all the new systems driving consumer electronic markets,” commented Guillaume Girardin Technology & Market Analyst, MEMS & Sensors at Yole.

The total audio business was worth more than $15bn in 2016. Moreover, Yole announces today a CAGR close to six percent, in 2022. The audio device market will become a key feature in all the applications it is involved in. According to the Acoustic MEMS & Audio Solutions report, there is clearly room for more benefits in the audio supply and value chain, as well as other significant changes.

At the device level, the MEMS microphone market has almost reached the $1bn milestone, with a value of $993m in 2016. Combined with the $700m ECM market, now the acquisition of sound is almost a $2bn value market. The µspeaker market is estimated to be worth $8.7bn.

In addition to these two visible elements of the audio chain, the audio IC market, which includes codecs, DSPs and amplifiers, should reach $4.3bn in 2016.

Mobile remains the main market segment for microphones. This sector was very demanding in terms of volume but not so much in terms of performance: against two microphones per smartphone initially, mobile manufacturers developed solutions with more than five devices per system. “We are today in a new phase. With innovative technologies, smarter software, more algorithms, we reach a new level of performances and see solutions with higher value,” asserted Guillaume Girardin from Yole.