The 20th anniversary edition of IC Insights' McClean Report will be released in January of next year. The following represents a portion of the memory forecast that will appear in the new report. After increasing by more than 20% in both 2013 and 2014, the memory market fell upon difficult times in 2015.

Conditions that would normally be seen as favourable for boosting demand and increasing prices for memory devices such as supplier consolidation, limited capacity expansion, and a growing list of emerging applications did not prop up the market at all in 2015. Instead, slow system demand in personal computers led to excess inventory and steep price cuts in the second half of 2015. This resulted in a three percent decline to $78bn for the 2015 memory market. These same weak market conditions carried into the first half of 2016, but then memory prices began to firm in the second half of the year and the market finished the year on a strong note, though still down one percent year over year.

Looking to 2017, IC Insights’ forecast the total memory IC market will increase ten percent to a new record high of $85.3bn as gains in average selling prices for DRAM and NAND flash help boost total memory sales. Increases in the memory market are forecast to continue each year through the forecast, with sales topping $100bn for the first time in 2020 and then reaching nearly $110bn in 2021 (Figure 1).

From 2016-2021, the average annual growth rate for the memory market is forecast to be 7.3%; about 2.4 points more than the total IC market CAGR during this same time. Memory units are expected to grow by a CAGR of 5.6%. Playing a bigger role in memory market growth through 2021 will be strengthening Average Selling Prices (ASPs). Memory market ASPs fell three percent in 2015 and declined another 10% in 2016 but are expected to increase in all but one year (2020) through the forecast at an average annual rate of 1.8%. 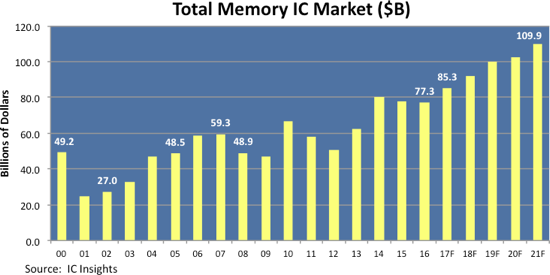