The inclusion of the HyperBus interface in the JEDEC xSPI standard simplifies designing in HyperBus-based memories and provides more flexibility to system designers to implement instant-on functionality in automotive, industrial and IoT applications.

Cypress was the first NOR flash memory supplier to identify the market requirement for a high speed, 8-bit bus and introduced the HyperBus interface in 2014, ushering in a new class of high performance NOR flash and RAM solutions that enable instant-on functionality for autonomous driving and industry 4.0 applications.

"Cypress continues to be a driving member of the JEDEC working committee that developed and proposed the xSPI standard," said Howard Sussman, JEDEC Board of Directors Vice-Chairman. "For system integrators, the JEDEC standard provides the means to easily second-source xSPI-compliant Flash devices. Use of the standard provides a single PCB package footprint and enables a unified device driver for all xSPI memories that configures the memory system based on a standardised xSPI method." 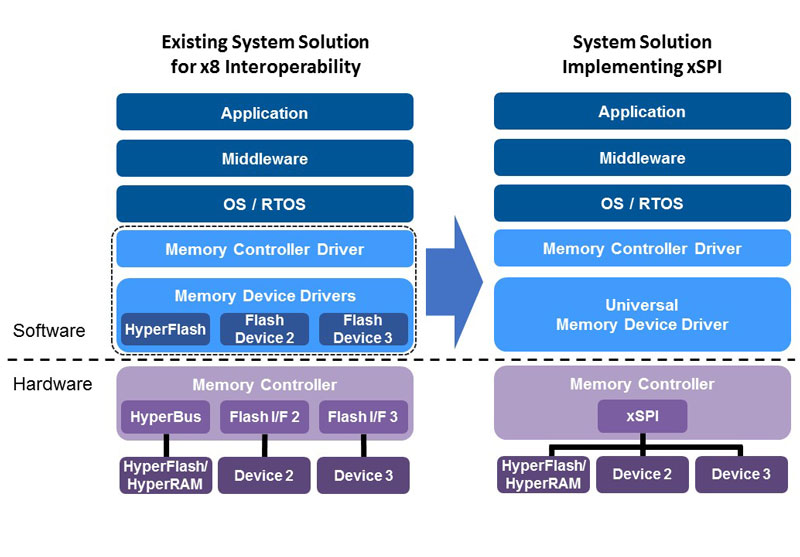 The xSPI standard defines requirements for the compatibility of high performance eight times serial interfaces, including read and write commands, electrical characteristics, signaling protocols for command and data transfers, and a standard pin-out in a Ball Grid Array (BGA) footprint.

"We firmly believe an open industry standard from a recognised standardisation body such as JEDEC is the best way to generate broad market support that benefits both customers and suppliers," said Rainer Hoehler, Vice President of the Flash Business Unit at Cypress.

"Having our HyperBus interface incorporated into the xSPI standard will make it easier for our customers to bring the convenience of instant-on to their systems."