Home > Products > Is IoT the next standards battleground?
IoT

Is IoT the next standards battleground?

In previous blog posts about future proofing an IoT deployment, the top 2 takeaways from discussions at the Industry of Things event in San Diego were covered.

Coming in the number two spot was the concept of protocols. Here is a key takeaway from the discussion: “Even with the latest progress in IoT protocols, industry participants continue to be concerned about making the right decision on which standards to adopt. It’s funny how the comparison to VHS versus Betamax still thrives more than 40 years later. Everyone is acutely aware that betting on the wrong standard can cause a serious disaster with product adoption. This healthy skepticism will mitigate the chances of that happening.”

When first venturing into the IoT space in 2014, the following chart was introduced to us and left an impact on a lot of people. The takeaway here is that the IoT technology stack is enormous and the supporting protocols are vast. 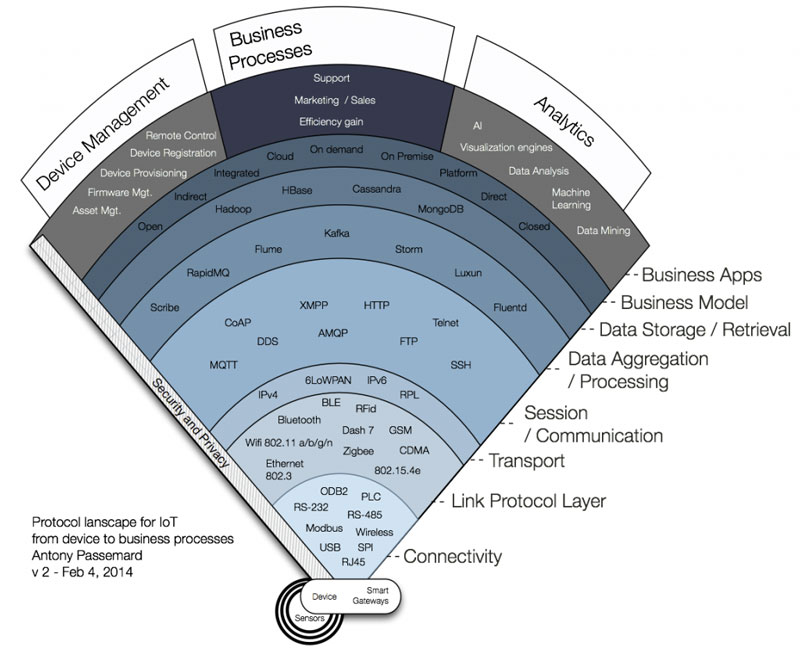 The noteworthy thing about this chart isn’t the number of technologies included. What is noteworthy is what isn’t in this chart. Specifically, LWM2M and OPC-UA aren’t included. This is a proof-point that IoT is evolving so rapidly that some of today’s frontrunners in the IoT protocol debate weren’t even part of the discussion four years ago. It will be interesting to revisit this blog four years from now to reflect on how much things have changed.

The protocol that we can see with the most traction is MQTT. MQTT has evolved into the defacto standard for sending and receiving data streams. The proliferation of open source tools and wide adoption across the major cloud platform providers has cemented MQTT’s place in the IoT world. When streaming high velocity data to the cloud, it is important to resist the urge to use a RESTful based technique.

The cost associated with creating and breaking down RESTful connections is too costly which means you can’t get the performance necessary to handle high velocity data. This makes MQTT the natural choice for the data plane. However, MQTT isn’t without its problems. The trickiest part of using MQTT is dealing with corporate firewalls because native MQTT runs on ports 1883 and 8883. To solve this problem, the Wind River Helix Device Cloud agent runs MQTT over encrypted WebSockets. This allows Device Cloud to use MQTT in a firewall friendly manner, even when deep packet inspection is in place.

The next winner in the protocol space is the Open Mobile Alliance (OMA) Lightweight Mobile to Mobile (LWM2M) protocol. OMA was able to successfully leverage their momentum from the OMA-DM protocol to introduce LWM2M in 2014. LWM2M’s focus on device management and support for resource constrained devices has made it an obvious choice for the IoT manageability plane. Currently industry leaders in the device management space are rapidly integrating LWM2M as a supported protocol. The same holds true for Wind River Helix Device Cloud, LWM2M support is a priority.

The industrial automation space is notorious for its mish-mash of protocols and lack of interoperability. This has resulted in the need for protocol translation products which is now causing problems in IoT because the most compelling outcomes are found in industrial automation. Solving this challenge moving forward is the OPC-UA standard. OPC-UA is an open standard that specifies information exchange for industrial communication and represents the convergence of Operational Technology (OT) and Information Technology (IT). This makes OPC-UA vendor independent, scalable, and secure. The result is that OPC-UA has been widely adopted in manufacturing sectors such as automotive, food & beverage, oil & gas, energy, packaging, and building automation. This makes OPC-UA a clear winner in the industrial automation space.

When making technology decisions for your internet of things solution, make sure you choose a protocol that is going to follow the path of VHS as opposed to Betamax. By selecting a winning protocol you will get access to a rich set of open source tools, built-in interoperability with other vendors, and community support.