IoT software enables Zigbee and Bluetooth to work together

In advance of the release of Silicon Labs’ new dynamic multiprotocol software for its Wireless Gecko system-on-chip (SoC) and module portfolio, Electronic Specifier got the chance to speak with Tom Pannell, Senior Director of Marketing, IoT Products. Principally a mixed signal and analogue company, Silicon Labs entered the software market five years ago. Now the IoT group - of which Pannell is a member – accounts for half of the company’s revenue.

Pannell explained that the IoT group is primarily focused on low power, wireless connectivity for the IoT markets. These markets include the billions of ‘things’ that people are trying to connect in their environments, from remote temperature sensors to garage door openers. In the UK, the current deployment of smart meters is an example.

The entire backbone of this IoT deployment is based on a protocol called Zigbee, of which Silicon Labs claims to be the number one provider.

In the connected devices market, multiple protocols exist, including Zigbee, Bluetooth, and Thread. These protocols are used by ecosystems to provide consumers with easy-to-use solutions. As a result, gaining control of these protocols is of paramount importance.

Silicon Labs’ multiprotocol software enables simultaneous operation of Zigbee and Bluetooth Low Energy (LE) on a single SoC and brings together the key application benefits of both protocols.

This multiprotocol solution enables advanced functionality for IoT applications without incurring the additional complexity and hardware cost of a two-chip architecture, thereby reducing the wireless subsystem bill-of-materials (BOM) cost and size by up to 40%.

He continued: “You walk up to your door, you want to unlock it with your phone, so you punch in a PIN code and the door unlocks. You walk into your home and lock the door behind you. Later at night you want to check if the doors are locked, or your environment or security systems are working. A process like this generally uses a Zigbee system.” 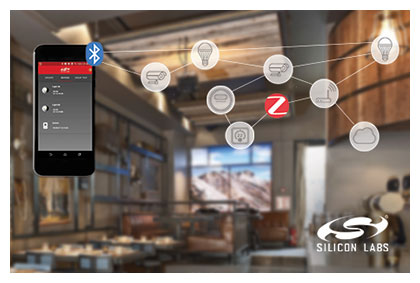 However, later that night someone else might want to get home, and they unlock the door with Bluetooth. The multiprotocol solution allows multiple different wireless protocols to connect to a single device in a more efficient way and with a lesser BOM cost. While most devices ‘speak’ Bluetooth, few currently support Zigbee. The solution means the user does not need a separate Zigbee dongle to enter their house.

A certain number of security issues can arise with multiprotocol devices, but Pannell stressed that the network itself is always encrypted and designed to be secure. “We are going to continue to build and advance that over time, as well.” If you don’t change your default password, Silicon Labs can’t help you, but when you provision a device, it is secure. “We’re trying to make it very, very hard for people to hack or violate the network.”

In addition to home environments, the multiprotocol solution is beneficial in commercial and retail spaces. Pannell gave the example of an airport where Bluetooth beacons can guide you, because GPS doesn’t work. Here, the coverage density can be limited because there has to be individual beacons. This is where a multiprotocol solution is useful. It enables you to include beacons in the infrastructure: more beacons can be included in lights which never move, or exit signs which don’t move. Now, using Zigbee, you can add beacons to this infrastructure and guide people from a gate to another gate, for example.

Pannell explained that Silicon Labs has leveraged its expertise in mixed signal and analogue design here by using a single radio in its device. Simple device setup is important, and the company has proven, scalable network that can also offer additional services like locationing and infrastructure control. As a result, Silicon Labs can hopefully reduce costs for its customers.

“This radio speaks at 2.4GHz frequencies, which is the frequency of both Zigbee and Bluetooth. The radio that makes it up is highly configurable, so we’ve created a scheme by which we can share the radio and speak both languages – referred to as dynamic multiprotocol. We multiplex the radio infrastructure in time to abide by the Zigbee and Bluetooth rules, so we can support Zigbee routing, Bluetooth connections, Bluetooth beaconing, and provide configuration to the customer to ultimately create the seamless experience they want with their product.”

In order to further simplify multiprotocol design, Silicon Labs offers a variety of tools including the Simplicity Studio and Starter Kit with Radio Board. In order to improve time to market, the network analyser allows customers to analyse all the packets going through the network at an embedded level. The energy profiler helps customers know how much power is being used throughout a network at different nodes. Application configuration means a customer can pull in prewritten code, which accelerates time to market.

In the new year, Silicon Labs will be demonstrating the multiprotocol dynamic solution at CES and embedded world.

Having just introduced this new solution to market, what does Pannell think the future holds for IoT? “People look at IoT in four ‘buckets’: health, city, home, and industry. I would say that, in industry, IoT is going to continue to grow at a very fast pace, driven by government regulation such as GB smart metering. All of this stuff requires control, and wireless is a terrific way to do that.

“In the home, we think it’s going to be big or huge. The reason for that is this stuff just finds it way in, people want security systems, they want the convenience of a garage door opener, they want the convenience of knowing that their garage door is actually closed if they’re on vacation, the convenience of being able to control their thermostats to save power. This is going to evolve over years. You’ll buy one thing like an Echo or a doorbell that takes a picture, then you’ll want to use the face recognition to let people in remotely, or allow the postman to deliver stuff into your front room. Suddenly this stuff sort of builds.

“The future is extremely bright in the home. Particularly in the security market, there are so many new solutions coming to market, and they’re going to be big or huge. For us, because all these things are coming out, that this is big, this is happening right now. Only time will tell how big it’s going to be.”