Our website is made possible by displaying online advertisements to our visitors. Please consider supporting us by disabling your ad blocker.
Home > Products > Drawing a line in the bands
IoT

Drawing a line in the bands

Steve Rogerson looks at the LPWAN technologies competing to bring IoT to the world.

A clear dividing line is being drawn between the different communications technologies that will enable the mass deployment of the Internet of Things (IoT). For the predicted millions of small devices to be connected to happen, then the wireless communications will need to be cheap to deploy and, more importantly, low power, as these devices will be expected to last for years without a battery change or rely purely on harvested energy.

That line in low power WAN (LPWAN) technologies is between the unlicensed spectrum and adaptions to existing cellular technologies. On the unlicensed front, Sigfox was first to market and has made numerous high profile deployments in cities around the world. Operating on a different business model are the proponents of the LoRaWan standard and it too is claiming successes in many countries. Rather later to the table is Ingenu, and it is focussing initially on the US but with an eye on Europe and beyond. 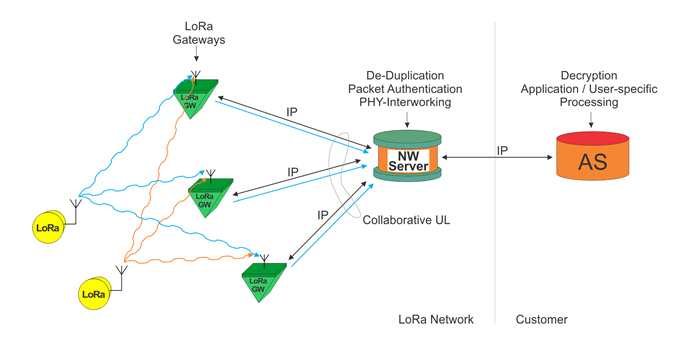 Above: The LPWANs take a clean sheet approach - in the case of LoRa, the hardware layer is the thinnest layer possible, limited to a gateway that can be run on a USB stick and the rest of the entire network is software defined

On the other side of the wall are the cellular standards being developed by the 3GPP, and again it is not a one-size fits all but rather three alternatives – the much publicised narrowband-IoT, or NB-IoT, along with LTE Cat 0 and Cat M. And Cat 1 cannot be ruled out. This has been around for a while but is too weak for mobile broadband but could handle some IoT cases.

Cat 0 is more recent and more suitable for IoT but is seen as a bit of a stopgap before Cat M1 appears - this is a much simplified version of Cat 1 designed specifically for M2M communications.

Future coverage
However, it is NB-IoT that many see as the future of the IoT. This provides better indoor coverage and can support very large numbers of small devices. Some believe this will over time win the overall war on both sides of the wall.

“It is good that there are various options out there,” said Thomas Nicholls, Executive Vice President at Sigfox. “Most will find their space and market. The market will decide where the different technologies will fit in.”

There have been other players but, as Joel Young, Chief Technology Officer at Digi and Chairman of the IoT M2M Council (IMC), said: “Most of the others have more or less disappeared.”

He said Digi had evaluated all the technologies but acknowledged that it was not always the best technology that ended up winning. On the unlicensed front, he believes Ingenu has the better technology but could lose out because of its lateness to market.

“Sigfox and LoRa got out there way early,” he said, “and they are very good at raising money, especially Sigfox.”

Sigfox, however, he said was a little slow starting its roll-out in the US due to it needing different technologies to its home network in Europe. Also, Sigfox has a very low data rate compared with the others - fine for many M2M applications - and it can only do one-way communications, making over-the-air software updates more complex.

“We want to push simplicity to the extreme,” said Nicholls. However, Young said this technical limitation combined with the slow deployment in North America could see the standard not being strong enough to hold off the cellular challenge as it gathers momentum.

LoRa does not have the same technical limitations, however it is tied to just one chip company, Semtech, and that has meant the competition for the radio modules has not been to the same degree as with others, leading to its module costs still being higher.

Above: Some of the competitors in the wireless space

“LoRa is 100% proprietary and Semtech governs exactly who can do what, and there is a very small range of chipsets available,” said Nicholls. “This has consequences on cost as there is not a lot of competition. We can have a communications module for $2.00 and that is a cost point no-one else can meet today.”

However, Richard Lansdowne, Senior Director at Semtech, said there were no reasons why there should be any difference in cost and that any difference would be eroded as volumes rose.

“We are putting together an ecosystem of people who will install a network and supply equipment,” he said. “It is more a kit of parts. Some will offer a one-stop shop but users will be able to pick and choose.”

LoRa technology is not new, having been used for private networks for some time, and Young has his doubts about whether this successfully transfers to public networks.

“I am sceptical about it being used in public networks because of quality of service,” he said. “But for private networks there are some nice uses, say for campus-wide networks where they can control the subscribers, which you cannot do in a public network.”

“LoRa is very easy to deploy,” countered Lansdowne, “so those who want to dip their toes in the water can.”

He also said LoRa scored over Sigfox because of its variable data rate, which meant at times when the signal was very strong the data rate could be increased accordingly.

“Sigfox is best where all your assets are in hard-to-reach places,” he said. “LoRa is more variable and more controllable.”

“It is really good stuff,” said Young. “It has the performance characteristics of LoRa but does better in noisy environments. I think, however, they are too late in the market.”

Building on history
Though the name Ingenu has only been around for about 18 months, the company itself, under the name On-Ramp Wireless, has a longer history building private networks. The unlicensed public network it is building in the US now covers around 40 urban areas and it hopes by the end of the year to have reached 100 areas and 70% of the population rising to 90% by the end of 2018. And the company’s Chief Marketing Officer Landon Garner said at this year’s Mobile World Congress in Barcelona it would be announcing 20 other countries where networks were under construction.

“It is moving very fast,” he said. “LoRa and Sigfox will fit a need out there but they are going to have problems when the volume picks up. They will not have that big a niche and it will be a niche at the bottom of the market.”

Ingenu also uses 2.4GHz spectrum as opposed to sub-GHz for the other two.

“This is available for free all around the world,” he said, “so we can be as affordable and cost effective as anyone. One radio will work anywhere. This means you can put it on a container and ship it all over the world and it will connect and do its job in every country.”

While he acknowledged that Sigfox and LoRa had an early advantage, he did not see them as a long term threat.

“The early bird does get the worm in a lot of cases,” he said. “The first mover does have an advantage, but our big competitors are going to be on the cellular side.”

In fact, all three unlicensed technologies, Young believes, are looking very vulnerable to the emerging cellular technologies, particularly Cat M1 and NB-IoT. However, the war between the two could hold back their success, especially given its geographic nature. In the US, Cat M1 looks favourite but not so in Europe where NB-IoT is the preferred choice.

“By the end of 2017,” said Young, “you will see substantial coverage of NB-IoT from Vodafone in Europe. The big gap is France where Orange is putting its money on Cat M1.”

One snag, and it is a big snag, is that the cost of the modules is higher for cellular than it is for the unlicensed crowd, but the difference is coming down.

“The end modules are not that much cheaper,” said Young. “They are a little cheaper and for NB-IoT they will be almost exactly the same.”

However, Lansdowne said the amount of money that cellular companies could make from the IoT was a very small percentage of their total business and that this would lead to them not investing significant resources.

“It will be right at the back of their priorities,” he said. “The revenue they can make from it will be scarily low.”

Conclusion
As with any market in its early stages, there will be competing technologies hoping to either emerge as winners or at least carve a large enough niche to make a reasonable business.

“There is no technology that will have a monopoly,” said Adarsh Krishnan, an analyst with ABI Research. “There will be multiple technologies attacking the same market. There is no single differentiating factor that will give one or the other a significant market. It may all come down to the business model.”

How long this will take to shake out is anyone’s guess, but 2017 could be a key year as the cellular technologies ramp up. That said, it could be at least until 2020 before a clearer position of long term market share emerges.