Among this segment, AMOLED technology is expected to showcase a significant growth in near future on account of growing adoption of energy efficient and durable display technology devices in various corporate and healthcare sectors and rising demand from consumers end owing to availability of high definition quality in OLED televisions.

The OLED television market is expected to reach $21.3bn by 2023 and the market is expected to flourish at a CAGR of 17.6% over the forecast period 2016-2023. The global market of OLED TV is majorly stimulated on the back of rising personal disposable income in developing nations and growing demand for advanced consumer electronics in urban regions across the globe.

The Middle-East region is expected to showcase a lucrative growth in the market of OLED televisions over the forecast period 2016-2023 on account of rapid digitisation in education and healthcare sector and growing adoption of premium display technology such as OLED televisions. However, Asia-Pacific is anticipated to be the fastest growing market in the overall market of OLED televisions across the globe owing to presence of key players in Asian countries such as Samsung and LG Electronics and rapid urbanisation which leads to increase demand for advanced consumer goods in near future.

Growth in urbanisation: fortify
Factors such as rapid growth in urbanisation in growing economies, emergence of automotive and healthcare sector across the globe, rise in gross disposable income in developing nations, wide scale application of OLED televisions in automobile industries for display and navigation likely to spur the demand for OLED televisions over the forecast period i.e. 2016-2023.

Although, lack of awareness in undeveloped nations, slow adoption of OLED television and high cost of OLED televisions are some of the major key factors expected to restraint the growth of OLED TV market over the forecast period i.e. 2016-2023. 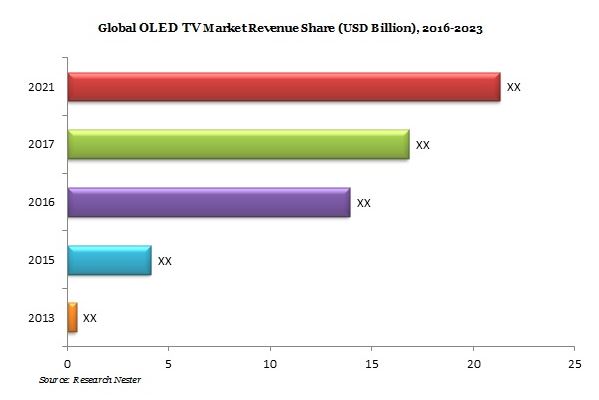 This report also provides the existing competitive scenario of some of the service providers of the Global OLED TV Market which includes company profiling of LG Electronics, Samsung Electronics, and Haier Group. The profiling enfolds key information of the companies which encompasses business overview, products and services, key financials and recent news and developments. On the whole, the report depicts detailed overview on the Global OLED TV Market that will help industry consultants, equipment manufacturers, existing players searching for expansion opportunities, new players searching possibilities and other stake holders to align their market centric strategies according to the ongoing and expected trends in the future.