MEMS microphones have been steadily expanding opportunities and functionality into a wide range of devices, now adding communication and monitoring capabilities into the mix. Voice-enabled navigation devices and digital home assistants are examples of such devices driving this change and are helping to boost the huge growth in voice-controlled electronics.

With the possible use cases for MEMS microphones continuing to grow, it is important for designers to understand the different types of MEMS microphone electrical interfaces and how to apply them.

MEMS microphone overview
MEMS microphones are generally assembled by putting two semiconductor chips into a single package. The first chip consists of a MEMS membrane converting sound waves into an electrical signal, while the second is an amplifier that can contain an Analogue-to-Digital Converter (ADC).

Where an ADC is included in the MEMS microphone, a digital output signal is present; but in the absence of an ADC, an analogue output signal must be made available to the user.

In addition, the pole frequency generated by the combination of C1 and R1 should be set low enough so that the preferred audio frequency signals are passed to the host circuit with an appropriate level of attenuation; for example, for a minimum audio frequency range of 20Hz, 1/(2*π*R1*C1) <20Hz. 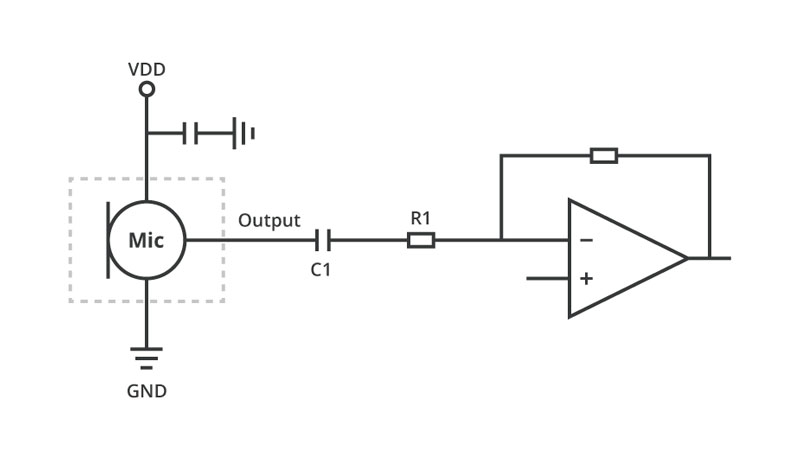 Where PDM is employed, the analogue signal voltage is converted into a single bit digital stream comprising a matching density of logic high signals, with the added advantages of bit error tolerance, electrical noise immunity and a simple hardware interface.

Figure 2 below illustrates how a single digital microphone with PDM output can be configured with a host circuit. By connecting the ‘select’ pin to either Vdd or Gnd reveals whether the data is stated on the rising or falling edge of the clock signal. 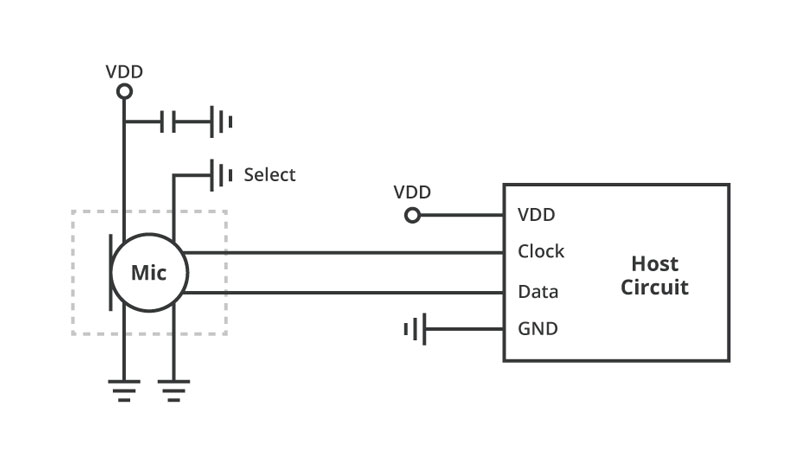 In figure 3 below, two microphones are connected to a host circuit via shared data and clock lines, a configuration that’s often used when setting up stereo microphones. 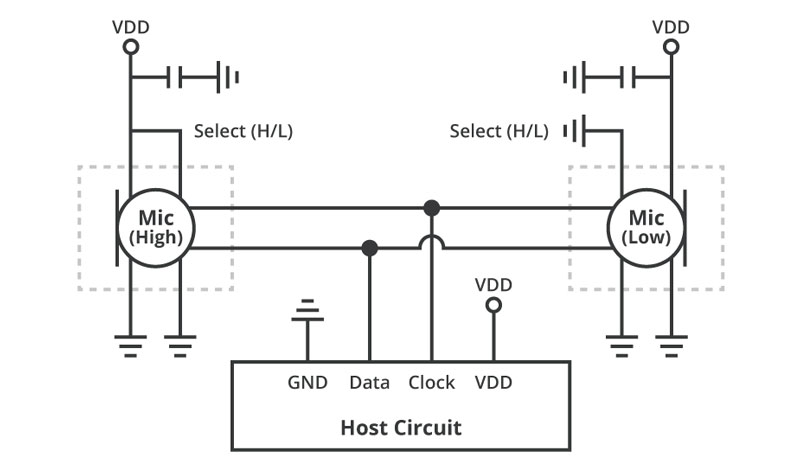 This could include common analogue applications like a radio communication system or simple loudspeaker. Due to the absence of an ADC, MEMS microphones with analogue outputs are also likely to demonstrate lower power consumption than those with digital outputs.

On the other hand, a digital output signal from a MEMS microphone has its advantages when the signal is applied to digital circuitry, like a Digital Signal Processor (DSP) or microcontroller, for example.

The digital output signals also demonstrate a greater immunity to electrical noise than their traditional analogue signal equivalents, which can be useful if the conductors between the microphone and the host circuit are within an electrically noisy environment.

Conclusion
With MEMS microphone technology growing in use and advantages, it’s important to understand the different configurations now available.

The choice between an analogue or digital output ultimately boils down to how the output signal will be used and within what type of system it will be applied.

Fortunately, electronic components manufacturer CUI Devices offers a range of MEMS microphones in both analogue or digital (PDM) outputs, giving you multiple options for your design.