According to new data released by Indeed, KPMG and PwC are comfortably the UK’s top cyber recruiters. Both companies are hiring a large proportion of cyber security specialists, with cyber roles accounting for one in every 17 (5.95%) new KPMG recruits and one in 20 (5.08%) new hires at PwC.

The two other members of the accountancy sector’s ‘Big Four’, EY and Deloitte, complete the cyber hirers’ top four, with cyber roles making up 1.99% and 1.47% respectively of their current job vacancies.

Telecoms giant Vodafone ranks fifth for cyber recruitment, while the rest of the top 20 includes a large contingent of financial and technology firms, with the supermarket Sainsbury’s the sole retailer to make the list. 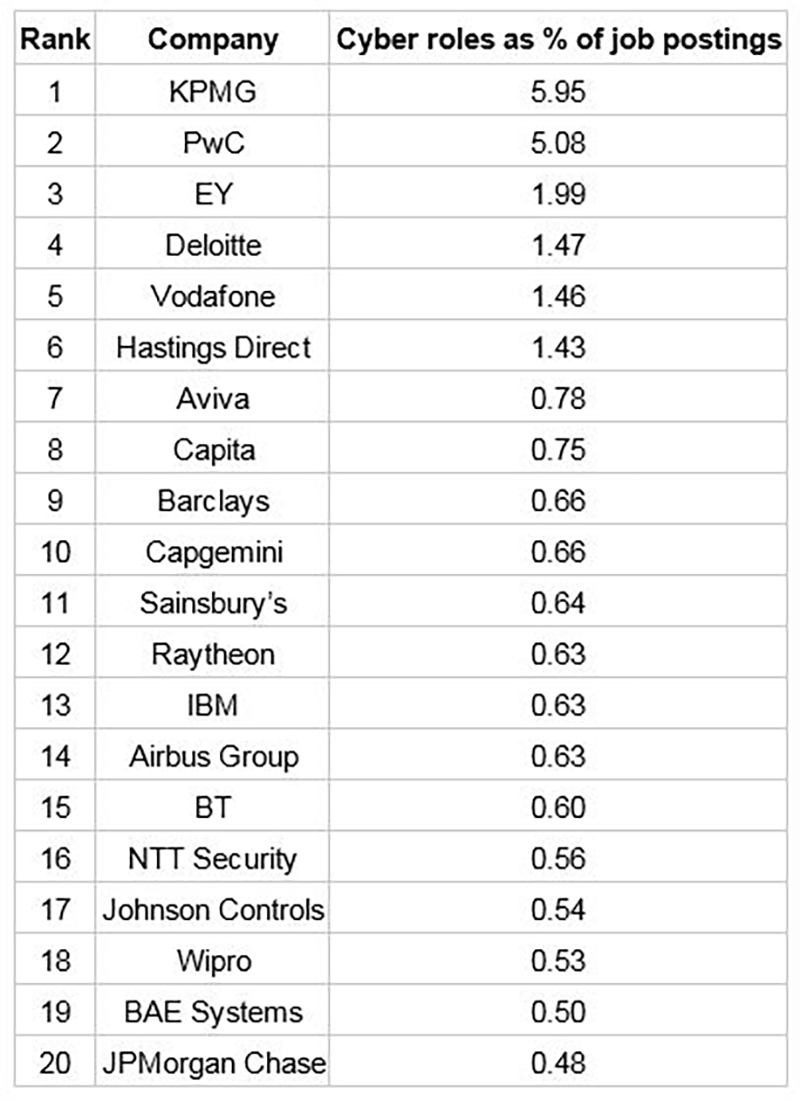 Cyber employees are more highly sought after than ever in the UK, with Indeed seeing an increase of 14.58% in cyber postings per million vacancies from 2017 to 2018.

The most sought after cyber roles can be highly lucrative. All the most in-demand positions offer an average annual salary above the national average of £27,600, with the top five paying a combined average of £45,851 a year.

Leading the way is the role of ‘IT security specialist’, which has nearly three times as much demand among employers as the second placed ‘security engineer’.

Behind them are ‘security consultant’ and ‘information security analyst’, with ‘IT auditor’ completing the top five.

Bill Richards, UK Managing Director of Indeed, commented: “It’s telling that many large organisations now talk of ‘critical’ infrastructure rather than ‘IT’ infrastructure. Every aspect of a modern company relies on its IT, and the growing threat of cyber attack and tightening of privacy laws means demand is rising fast for professionals who are able to protect companies’ most precious information.

“By definition accountancy firms need to store lots of sensitive financial information, and they therefore require robust cyber defences. Nevertheless it’s striking that the ‘Big Four’ dominate all four top spots in our league table of the UK’s most prolific cyber hirers. Another telling observation is how the list comprises entirely of private sector companies as the corporate world builds digital defence lines.

“The critical importance of their work, the skill and discretion it requires, and strong demand from employers have combined to drive up cyber professionals’ salaries. Cyber security is both a hot topic and a lucrative profession right now.”