Home > Products > Which countries have been most targeted by cyber attacks?
Cyber Security

Which countries have been most targeted by cyber attacks?

The prevalence and severity of cyber attacks are increasing at an alarming rate every year. So much so, that statistics from Cybersecurity Ventures estimate that cyber crime will cost the global economy a colossal $6 trillion per year by 2021. Specops Software analysed the latest data from Center for Strategic and International Studies (CSIS) to discover which countries across the world have experienced the most cyber attacks classified as significant between May 2006 - June 2020.

Significant cyber attacks are defined as cyber attacks on a country’s government agencies, defense and high tech companies, or economic crimes with losses equating to more than a million dollars.

Specops Software found that the US has been victim to the most cyber attacks categorised as significant (156) between May 2006 - June 2020. The equivalent of 11 very serious cyber attacks each year since 2006.

One of the most recent (May 2020) breaches aimed towards the US has been brought to light by the National Security Agency (NSA), who found that Russian hackers are exploiting a bug in a commonly used email server to infiltrate sensitive data from American organisations.

In second position is the United Kingdom. The UK has seen 47 cyber attacks categorised as significant since May 2006 to June 2020. One of the 47 incidents was the large-scale cyber attack deployed across the Labour Party’s digital platforms during the 2019 general election.

Australia is in sixth place with 16 momentous cyber attacks recorded. The most recent compromise was announced last month (June 2020) by Prime Minister Scott Morrison, who said Australia’s government agencies and essential businesses/services were being targeted by large-scale sophisticated cyber attacks.

Interestingly, China, Iran and Saudi Arabia have each experienced the same number (15) of significant cyber attacks between May 2006 and June 2020.

On the other end, North Korea has only been hit by five significant cyber attacks. Faring much better than neighboring South Korea, who have suffered from 18 major cyber attacks.

Stay Up to Date

Keep anti-virus software up-to-date, apply the latest security patches and periodically change passwords (i.e. at least once a month) across your IT estate.

If you have the knowledge and capabilities to do so, then carry out a regular diagnostic of your IT systems to identify any vulnerabilities that could be targeted and exposed.

If you own a business or are a key decision maker in a company, then take the initiative to create a formal document which firmly states the company’s policies on cyber security. Clearly establishing what individuals can and cannot do with the company’s IT systems/networks/devices. 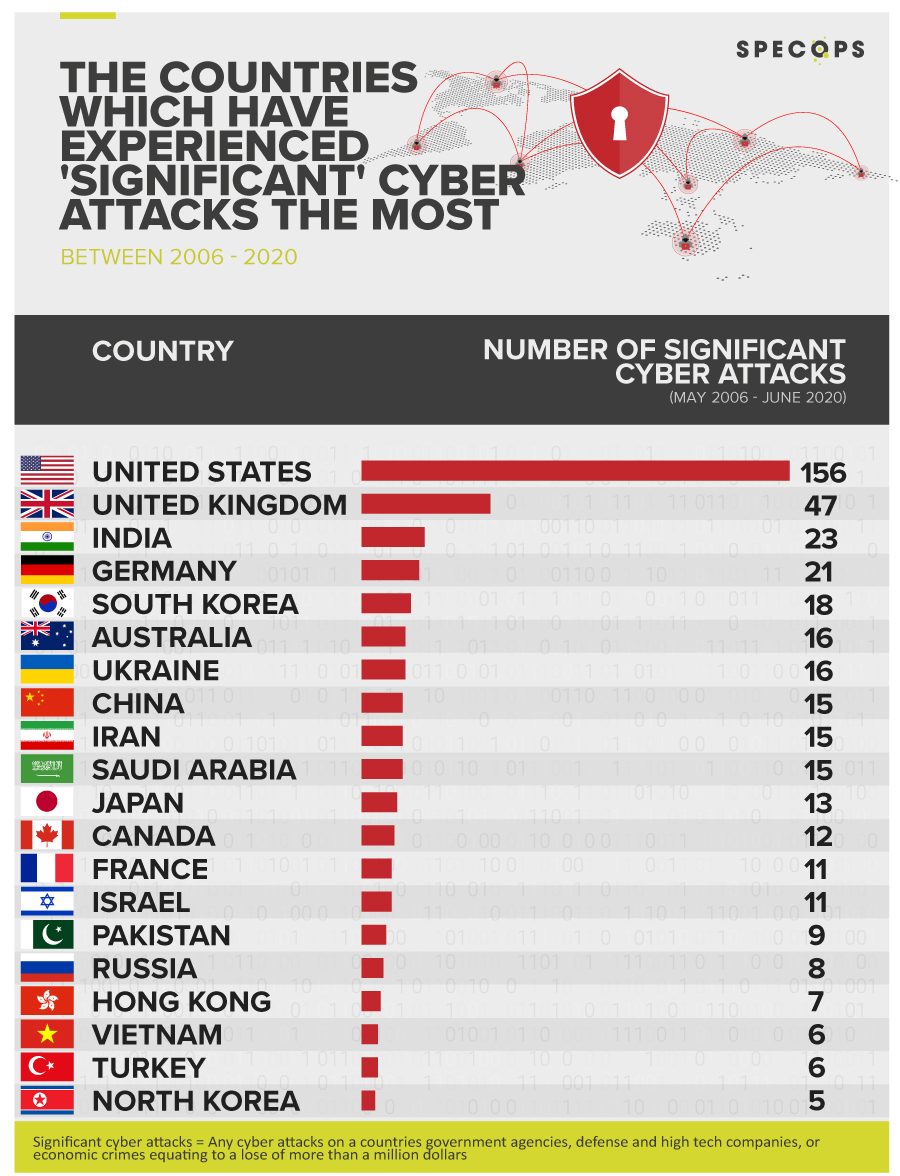