It was a very successful show for the MicroCare Europe team at Productronica 2017, in Munich as the company saw footfall upwards of 44,000, and visitors from 42 different countries and the MicroCare stand was overwhelmed by the positive feedback from end-users and distributors, all interested by the company’s new cleaning technologies.

The company believes that with a strong message, innovative products and an impressive number of visitors on the stand, MicroCare Europe demonstrated a firm commitment to helping companies clean their PCBs faster, better and at lower cost while meeting ever-more stringent European and global regulations.

The product which drew the most attention was the Tergo family of cleaners. MicroCare won a Global Technology Award at the show for the new halogen-free Tergo Chlorine-Free Cleaning Fluid. This product demonstrated excellence in innovation, a strong cost-benefit analysis, enhanced worker safety and improved environmental considerations, making it one of the most effective new cleaning fluids on the market. 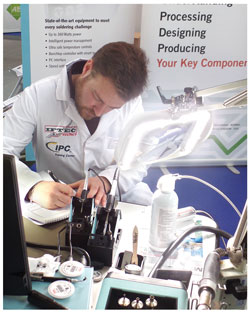 Another exciting development was the MicroCare participation in the IPC’s Hand Soldering Competition. MicroCare benchtop cleaners and the TriggerGrip cleaning tool were installed on all the workstations and the contestants found the products convenient and fast. Over four days, several dozen participants competed against each other to build a complete and functional electronics assembly within a 45-minute time limit.

“I can confidently say that Productronica was a resounding success for MicroCare, perhaps one of the best Productronica exhibitions we have ever attended”, commented Mike Jones, Vice President of MicroCare Corporation. “We were not sure just how the show would be this year, with the uncertainty of Brexit and other turmoil across Europe. But we were encouraged to see that traffic was intense, and business is strong.”

The MicroCare stand saw a busy show, and sales engineer Venesia Hurtubise made her first appearance at a Productronica event and spent her days demonstrating the cost-saving benefits of modern cleaning fluids in a vapour degreaser.

The degreaser which was provided by C.C. Hydrosonics, from Harlow, UK. The equipment was used to demonstrate the impressive results that could be obtained by the Tergo family of cleaners. At the show, the selected fluid had been optimized to clean difficult solder pastes and flux residues from PCBs while meeting the stringent new European F-Gas and REACH regulations.