After having released the KNX software technology for the ERLTM (Emetteur Radio Linky) for the pilot project Smart Electric Lyon, Gossé & Tech Tapko has provided the first KNX RF Stack on RF multi and security for push-button configuration. LAPIS Semiconductor, a ROHM Group company has partnered with GT Tapko to provide a driver to the ML7345 RF Chipset for the KNX RF Technology.

ROHM LAPIS ML7345 is a new generation of RF chipsets including a smart packet handler (compatible with WMBUS sharing the same physical layer as KNX Ready) with automatic preamble generation, RX pattern detection, CRC checking and FIFO mode. Effort has been made for handling RF multi by the ML7345 with fast acknowledgement, providing an efficient solution for communication between the electrical meter and any connected device in the house. (Display, Boiler, KNX home automation installation). 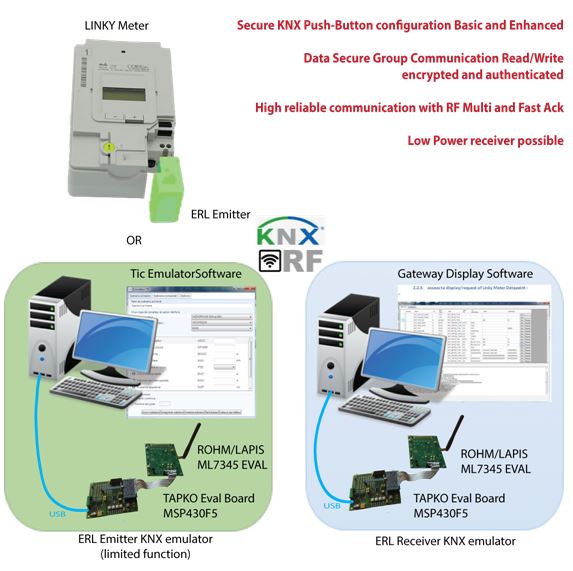 Firstly, the Wireless Control Tool 3 from ROHM has been updated to display and send KNX Ready telegrams using the ML7345EVA board. Closer to ERL project, a demo application emulating an ERL emitter and a receiver based on the ML7345EVA as RF module associated to a Tapko MSP430F5 evaluation boards is available by Tapko and ROHM. Full KNX interworking and ERL KNX compliance is already included in the application that is based on the KNX ERL easy channel functional block. Basic and enhanced secured push-button configuration is supported.

KNX RF multi stack is already certified and new certification for security and physical Layer with LAPIS is planned in Q1/2017. As the provider of KNX RF Push-button, RF multi and security stack and application, GT Tapko will follow the last evolution of both ERL and KNX standards.