Why potting is used

First, what is hardware potting? It is a process where you protect electronics from various effects by filling an enclosure of the electronics with a potting material. The potting material can be solid or gelatinous. Typical materials are thermosetting plastics, silicone gels, and epoxy resins. The word encapsulation is used instead of potting when no enclosure exists. The potting protects from electrical discharge, shock, vibration, moisture, and corrosion. For example, ATEX-certified products need solutions to tackle the electric discharge, and hardware potting is one of the options.

Potting or over-molding is widely used but it does create several problems if the electronics include antennas or other RF components. Problems are generated by the fact that rf components including antennas are impedance dependent and those have been developed for an environment where they are exposed to air. The potting process replaces the air with the potting material changing the behavior of the RF components. 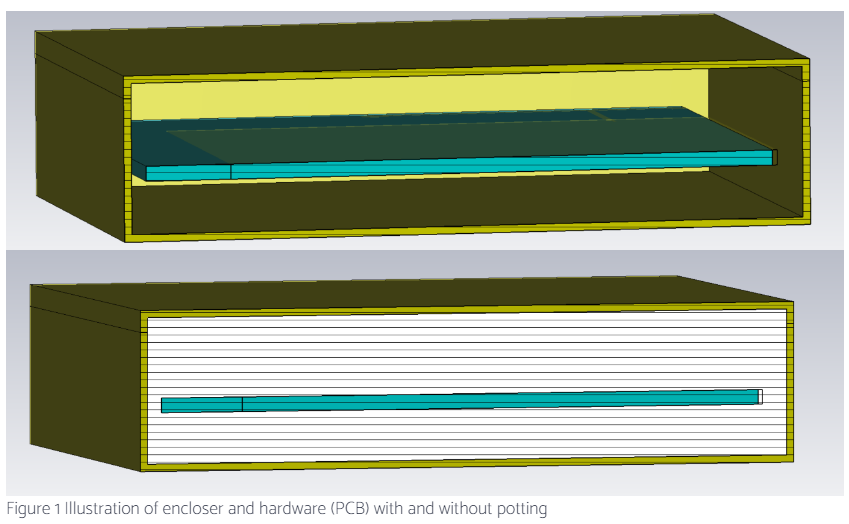 1. You should find out the permittivity and conductivity of your potting material at the frequencies your device uses.

The values can be very different at 1kHz and 1GHz but if you have a 2.4GHz radio a value for any frequency around 0.5-5.5GHz is often going to be accurate enough. Many material suppliers don’t provide these values for various frequencies which means you either have to find similar material that does provide it or measure it.

2. When you calculate 50ohm PCB trace dimensions, remember to use the permittivity of your potting material instead of air.

3. Try to exclude the antenna from the potting.

Some potting materials have high enough permittivity that prevents the use of standard antennas. The resonance frequency of the antenna is tuned too much to compensate for the matching circuit. The antenna can be excluded if you use a barrier structure or you can encapsulate the antenna with another material that doesn’t cause tuning.

4. If you cannot exclude the antenna from potting you can customize your antenna.

Many antenna components can be customised by changing the layout around the antenna. You can also develop a completely custom antenna. The benefit of customisation is that you can design the antenna into an environment that is not air but your potting material negating the problem almost entirely. However, if your potting material is lossy no amount of customisation will make it good.

5. Plan your testing process according to hardware potting.

Once your device is potted it is very difficult to get access to the RF components without removing the potting and as was mentioned earlier the potting material becomes a critical factor in the behavior of the RF circuitry. What you should do is have a two-stage approach.

You first test your device without potting the hardware. Add coaxial cables you need for testing and measure all interesting values without the potting material. The second step is for you to include the potting material and measure the same values. What you see is how the performance changed. Figure 2 shows how matching of GNSS antenna changes from correct frequency, the solid line before potting, to mismatched, dashed line after hardware potting.  now you need to start iterating between these steps. Each time you modify the device without potting, measure it, add potting and measure again. Eventually, you get it right but the process is very time-consuming and you will need several prototypes. 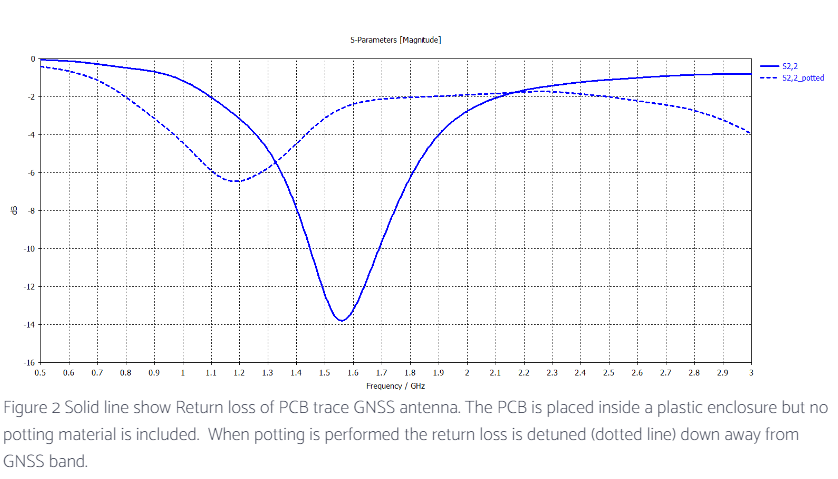 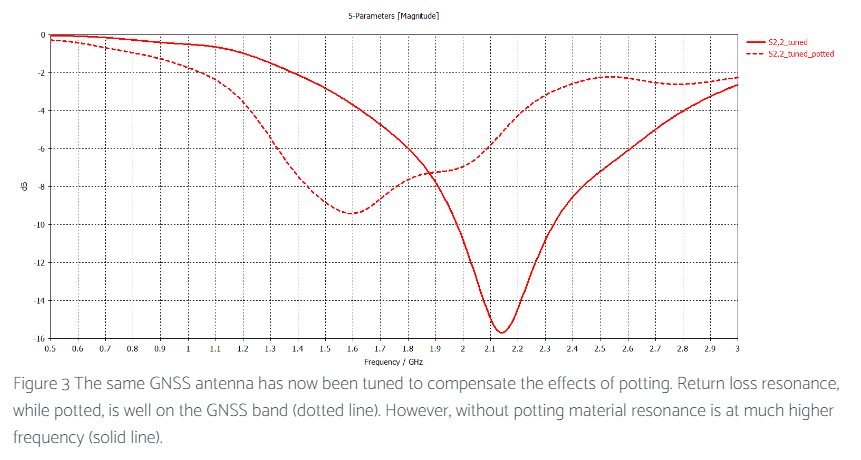 6. Professional Antenna and RF simulations are excellent tools to adjust your design for the effects of the hardware potting material.

Radientum is an engineering service company focused on the antenna, RF, and EMC services. We help companies to develop superior wireless devices while speeding up development and saving costs. Antenna simulations and material characterisation are core services we provide to our customers when they develop wireless products with potted hardware.