You have probably already witnessed 3D-MID technology in everyday use, it's part of the latest generation of smoke detectors. Design simplification and the integration of switches and cables save hardware and assembly costs. In the manufacture of industrial applications, more and more industry sectors are turning to a new technology as an alternative to classic PCBs.

The projects which Multiple Dimensions have created illustrate the diversity of possible applications for 3D-MID. They simplify the operation of household appliances, improve driver experience in power steering systems and open up new ways of saving space - for example in sensing and industrial electronics.

Johannes Schmid, Managing Director of Multiple Dimensions explains how these fine, golden traces on formed plastic are transforming industrial production. The basis of all 3D-MID applications is a thermoplastic material: "Using injection- moulding, we first manufacture the part to fit the customer's application. We use different types of thermoplastic, which contain an additive that can be activated by laser," he said, describing the underlying principles of the technology. A laser ray then engraves the surface of the plastic and activates the additive. A copper bath then follows, which lets the conductive traces form directly on the thermoplastic. Depending on the type of application, the MID parts may have to be extremely robust or temperature-resistant. "Some even have to be acid or sweat-resistant, for example applications for hearing aids or headphones," he continued. In a final step, a barrier layer of nickel is applied and then conditioned with a thin layer of gold to ensure good solderability.

According to the company, what differentiates it from the competition is that it produces traces in almost microscopically small dimensions. "Our manufacturing expertise is capable of competing with anyone in the world, especially our uniquely fine trace width and the narrow spacing between traces.” Most suppliers are currently working with 300-400μm spacing between traces. "At Multiple Dimensions however the technological limit for trace width is 80 μm," stated Schmid. "These fine structures are now often used in Point of Sales (POS) terminals as a protection from hacking attacks. The fine traces allow attacks on the data in the payment cards to be detected." 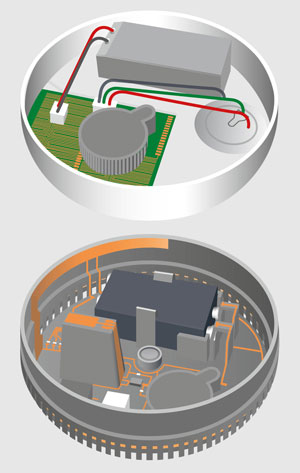 From washing machines to steering wheels
It is the trace width and spacing between the traces that differentiates the top players in the new 3D-MID technology from the rest of the pack. It is the main factor affecting the degree of miniaturisation and it is decisive in terms of the number of functions that can be integrated in a component.

There are already many concrete examples of applications using the technology: "We manufacture for a range of very diverse industries. I'm sure you are familiar with the rotary switches for programme selection in washing machines. These switches are normally made of a whole kit of small mechanical parts – with our 3D-MID technology none of these are now needed.” The washing programme is selected using a capacitive switch, i.e. virtually touch-free. This has far-reaching consequences; unlike with a mechanical solution, there is no friction to wear out the parts. "Our operator control device has a much simpler design, costs less to produce and on top of that, it has a longer service life," said Schmid.

The Swiss company manufactures sensors for the automotive industry which are used to measure the torque and position of steering wheels. "Depending on the position and the measured value, the drive of the power steering is increased or decreased. The more accurate the measurement, then the more directly the vehicle response is felt.” Just like in the example of the washing-machine, the conventional solution contains numerous mechanical parts. When all these parts work together, deviations and tolerances cumulate and impair the driving experience. "We are able to eliminate an entire chain of tolerances," explained Schmid. The technology not only saves components and costs, it also makes the application more precise and efficient. And last but not least, it increases the user's driving pleasure.

A maximum amount of functionality in minimal space
Functional integration in a minimum of space is demonstrated by a solution currently produced by Multiple Dimensions for a toy manufacturer. For enhanced player experience, an electronic circuit has been built into a tiny space in a plastic component – including a battery, a capacitive switch and an LED. "There simply would not have been enough space there for a printed circuit board. Here too, the operating control device, in this case a capacitive switch, is totally wear-free, and there is no mechanical contact."

In the future, the new 3D-MID technology will also be used in human-like robots. In Biel currently, experts from Multiple Dimensions are equipping the fingertips of a robotic hand (in the size of a human hand) with conductive traces. The surface of the robot's tactile organ is covered with sensors, their pressure signals are routed centrally to a connector. "Thanks to our 3D technology, we can place the required electronics accurately in spite of the complexity of working with a curved surface," Schmid remarked, emphasising the advantages of three-dimensional processing.

The trend towards miniaturisation is growing in importance in everyday life
Customers of Multiple Dimensions benefit from the potential of the new technology at many levels, including financially. "We don't just offer our state-of-the-art methodology and expertise that is unique in the world today; we also deliver it at a lower cost than many of our competitors." All production steps are fully automated and performed in-house at Multiple Dimensions. “We cover the complete process chain, from the injection-moulding process to laser processing and galvanisation, and even go as far as populating the electronic components. The saves transport costs and, most of all, time; savings that we are happy to pass on to our customers,” declared Schmid.

The Managing Director of Multiple Dimensions is convinced that as far as the development potential of 3D-MID technology is concerned, the end of the road is still a long way off. "Advances in miniaturisation which are being made in all areas of our industrial society, combined with the trend to intelligent connectors for Industry 4.0, ensure that 3D-MID technology will be used even more widely in future,” he said.

An example of 3D-MID in a smoke detector
The current generation of smoke detectors are suitable candidates for a technological update using 3D-MID. The enclosure is made of plastic, the conducting traces can be applied directly and the printed circuit board completely eliminated. Cables and connector plugs, and even the battery holder can be integrated into the moulded part. In production, complex soldering processes are eliminated and the assembly as a whole is simplified, due to the small number of parts. Another advantage is the easy integration of additional functions. For example, a capacitive switch can now be used, replacing the previously-used mechanical switch.