A new and welcome addition to conventional printed circuit boards, are the 3D moulded interconnect devices, from Multiple Dimensions, which are particularly well suited to Industry 4.0 applications. The example of a smoke detector illustrates how design and functional integration are simplified with this technology.

Whether rigid or flexible, printed circuit boards are a virtually indispensable part of electronic devices as interconnect devices. Plastic Moulded Interconnect Devices (MIDs) offer many advantages with regard to connection technology, including the combination of electrical and mechanical functions in a single component.

This makes it possible to use the housing and other moulded inner structures as an interconnect device, sometimes eliminating the need for a PCB.

3D functional integration
The MID is a multifunctional component with sensors arranged and aligned with a high precision combined with an RFID antenna for sending and receiving signals. This concentration of functions on a single carrier material enables development engineers to create 3D microelectromechanical systems (MEMS). MIDs are suited for this purpose, particularly when manufacturing large and very large volumes.

MID technology in detail
3D MIDs are manufactured using the LDS (Laser Direct Structuring) method: The shape of the interconnect device desired by the customer is created in a single-component injection moulding process, which offers virtually unlimited freedom for three-dimensional design. 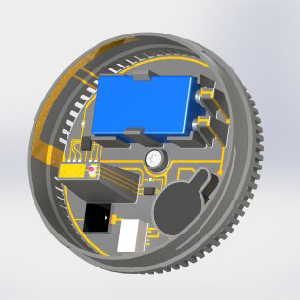 While conventional printed circuit boards use FR4 fiberglass fabric or similar base material, moulded interconnect devices are built from thermoplastics. The thermoplastic base material is first compounded with a (non-conductive) laser-activated metal-organic additive.

The LDS laser beam structures the circuit pattern onto the device by cleaving the metal-organic additives while roughening and ablating the plastic precisely where the beam strikes the surface.  Copper seeds split out from the additive, attracting free copper in the subsequent metallisation step.

In the following electroless metallisation process within a copper bath the copper seeds created in the lasering step now attract solid copper out of solution.  After copper plating, Electroless Nickel and Immersion Gold (ENIG) layers may be added to the copper layer.  When an MID is not soldered or bonded, nickel alone over copper is sufficient.   ENIG metallisation ensures good surface properties for designs where SMT soldering or Wire-Bonded component placement is desired.

Here the core benefits of the MIDs allows a reduced number of parts, resulting in process, material, and logistics savings while at the same time raising quality with the reduction of assembly steps and expenses. MID technology holds enormous potential for functionally oriented product development with optimised manufacturing processes.

Flexible printed circuit boards are often a suitable solution for bypassing physical distances at changing angles but for the precise positioning and fixing of sensors such as Hall-effect sensors or LED lighting on Flex, this incurs extra costs.

The MID component enables possibilities in the micro-scale and is unbeatable here, with the precise positioning of components and defined angles in arrangements being easy to realise. To achieve a fully realised MID product, antennas or shields can be attached to the carrier and connected to the circuit. Circuit density has been achieved in large series production with an 80µm circuit trace/80µm space and contributes to greater opportunity for miniaturisation.

Smoke detector concept based on 3D MID. The battery holder is integrated directly in the moulded part. 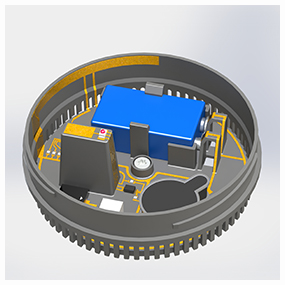 MID technology enables significant simplification of the design and the functional integration associated with the smoke detector. The battery holder is integrated directly in the MID part, thus forming all the metal contacts.  The two connecting cables and the elaborate soldering process for bonding are now redundant.

Standard SMDs can be soldered directly to the plastic, thereby saving costs while also allowing placement to be performed using pick-and-place machines, reducing personnel expenses for the assembly process to a minimum. The number of components is also reduced to a minimum - the printed circuit board is no longer required and circuit paths inscribed directly on the plastic replace the wire, which means that connecting plugs are also not needed.

Moreover, it is easy to integrate antennas in order to network the smoke detectors. By adapting the laser programming, any antenna structure can be applied directly to the same carrier material. Last but not least, because the MID technology eliminates the need for mechanical switches, it is simple to metallise a capacitive surface and use it as a capacitive switch.