Imprinting cables and wiring as fast as a hunting lion

Did you know, that when a lion is hunting it can run at speeds of more than 60km/h. Modern cable extruding machines operate at a similar pace. The problem: marking systems run the risk of creating bottlenecks in production. The solution from Paul Leibinger, KG: JET Rapid –one of the world's fastest continuous inkjet (CIJ) printers, that can keep up with speeds of up to 1,000m/min. Its users include cable manufacturers such as HUBER+SUHNER from Pfäffikon in Switzerland.

As part of the cable manufacturing process, electrical or fibre optic wires shoot through extruders which coat them in a protective outer layer made of materials such as Teflon or PE. Top of the range production systems are getting faster and faster: some of them now able to operate at up to 60km/h. These are speeds that threaten to bring the printers located downstream of the extruders to their knees. The manufacturer's name, logo, batch number and length label become distorted and, in the worst case, completely illegible. The consequences present a real challenge to many cable manufacturers: if the printer hits its limit for a mere two minutes, two kilometers of expensive cable will end up in the trash. So, how can production be made more reliable?

The JET Rapid can mark 1,000 meters of cable a minute
"To ensure our printers didn't become a bottleneck in these high-speed production systems, we developed the JET Rapid CIJ printer, which is one of the very fastest industrial marking systems in the world", explained Christina Leibinger, Managing Director at Leibinger, the product marking specialist, based in Tuttlingen, Baden-Württemberg, Germany. "The printer guarantees a reliably legible typography, even at system speeds of 1,000 meters per minute."

JET Rapid at work: 128,000 electrically charged ink drops fly towards the gutter every second
The JET Rapid is predestined for high-speed labeling tasks in the wire, cable and pipe manufacturing industries, confirmed HUBER+SUHNER AG, a Swiss company with a global reach in the electrical and optical bonding technology industry, with an annual turnover of €650m. "We ran exhaustive tests to compare this printer with machines from other manufacturers", said Thomas Haab, Project Manager at HUBER+SUHNER AG. "These tests proved that only Leibinger's printers can achieve the speeds we require."

The printer's automatic Sealtronic closure system, which is suited in this sector, also gives it exceptional reliability. The gutter is retracted and the nozzle is closed to create an airtight seal when the printer is not working. This prevents the ink from drying out and blocking the nozzle. As a result, there's no need for time-consuming cleaning.

And the secret behind the speed: CIJ technology ‘Made in Germany’ 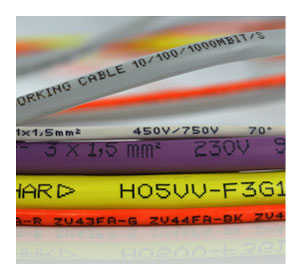 But what makes this ‘Made in Germany’ printer so efficient? It's the continuous inkjet (CIJ) technology, which mathematicians, engineers and electricians have perfected thanks to decades of research and testing. As a result, the printer can print at a rate impossible for the human eye to see. A minute spray nozzle in the cylinder-shaped printhead, mounted above the cable, fires 128,000 electrically charged ink drops towards the gutter every second. A high voltage field between the gutter ends changes the trajectory of the individual ink drops. The drops land on the cable as pixels, and are dry in less than a second. Information such as the manufacturer name, data matrix code and graphics appear on the cable as if painted by an invisible hand. And not just in black, yellow and blue: in a recent development, the JET Rapid can now even print easily readable, white text on black cables, by using specially pigmented inks.

Keeps up with extruder speeds of up to 1,000 m/min : Leibinger's JET Rapid
The JET Rapid will be on display at wire and Tube 2018 – the foremost trade fair for the wire, cable and pipe manufacturing industries, from 16-20th April 2018 in Düsseldorf, Germany. In addition to its flagship CIJ printer, Leibinger will also be showcasing the JET3up, designed for use with extruders running at up to 600m/min. A special feature: the printer uses a pigmented silver-gray ink that produces legible text on dark and light cables and pipes alike. This all-round solution means manufacturers no longer need different printers for printing black or white text.