Staying in lane, parking, driving in traffic jams - the latest ADAS (Advanced Driver Assistance Systems) can already do it all. However, there are few challenges to overcome before autonomous driving becomes a reality. Tamara Drexler, Assistant & Product Manager Automotive Business Unit at RUTRONIK explains.

When it comes to autonomous driving systems, the German automotive industry is in pole position, according to a recent study by the Cologne Institute for Economic Research (IW). The study revealed that the German automotive industry accounts for more than half of all patents filed worldwide since 2010. For instance, the new BMW 7 Series can park in the garage by itself, while the next-generation Porsche Panamera and the next Audi A8 models are equipped with an autonomous traffic-jam pilot that drives the vehicle through stop-start traffic without any input from the driver.

Conversely, only approximately seven percent of patents originate from Google, Apple, Tesla and other similar players. Google, the only company from outside the industry, ranks among the ten most innovative companies.
In spite of this news, German automotive companies must not take their collective foot off the gas pedal. According to IW, the US enterprises are driving the competition, and are already in a strong position in the area of digital components, networking technologies and big data business models.

Components for ADAS
Sensors, radar/LiDAR and cameras play a key role in the implementation of ADAS. Pressure sensors monitor the condition of the tyres, brightness sensors control the headlamps and wheel speed sensors enable the ABS function. Ultrasonic sensors measure the distance to the car in front, and this forms the basis by which the vehicle speed can be adjusted automatically to the flow of traffic. Cameras that can recognise traffic signs ensure that the vehicle does not exceed the stipulated speed limit.

The sensor data is processed by the microcontroller in the respective control unit, which then transmits the corresponding signals to the actuators, such as motors, valves as well as illuminated and audible signals.

For example, a lane departure warning system comprises a camera system that films the surroundings. Software in the computing unit processes the image data and defines the lane with its markings. Parallel to this, an angle detector measures the steering angle, which is also sent to the computing unit. If this data shows that the vehicle will depart from the lane, the control unit sends a signal to a motor that vibrates the steering wheel so that the driver can react in good time. Some models even use an electric servo-motor that corrects the steering angle.

From assistance to autonomy
As with the lane departure warning system, current ADAS systems are partially autonomous. In other words, responsibility remains with the driver.

However, other developments are clearly focused on full automation. According to a classification issued by the Society of Automotive Engineers (SAE international), this process passes through five levels. In levels 0 to 2, the human driver monitors the environment. From level 3 on, the automated system takes over this monitoring function, which then passes through the high automation of level 4 on the way to full automation in level 5.

Full automation differs from the high level of automation in that all driving modes are continuously and autonomously executed at all times. The current vehicles are still at level 1 (driver assistance) or 2 (partial automation). The upcoming models are already at level 3 (conditional automation). Each new level imposes additional requirements on the electronic control units. 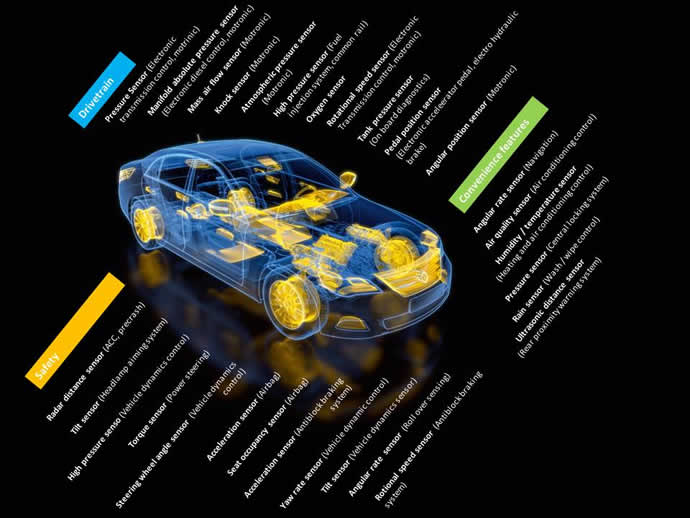 Above: countless sensors form the basis for a wide range of assistance systems and ultimately autonomous driving

Up to now, the various assistance systems have been largely implemented as separate solutions. They are only partially linked and are generally defined independently of one another. However, they must be networked for fully autonomous driving and the raw data from all sensors must be centrally processed.

This type of centralisation is logical for various reasons. The processing ECU has automatic access to all data, which allows this data to be used for a wide variety of functions. Since the sensor modules perform purely sensory and data transmission functions without any processing and decision making functions, data losses due to pre-processing or compression in the sensor module are eliminated. At the same time, the sensor modules can be smaller, cheaper and less power hungry, which in turn allows more sensors to be installed in the vehicle.

In this case, the bandwidth required to exchange all of this data increases sharply - compounded by precise measurements of the surrounding environment taken by camera systems, radar and laser scanners. The proportion of safety relevant data also increases. However, current

ECUs are not yet designed to cope with such enormous volumes of data. For this purpose, both their computing power as well as their processing speed must be significantly improved.

Connected car
Another of the vehicle systems is networking. Car-to-Car and Car-to-Infrastructure communication represent a mainstay of autonomous driving and increased economy by means of intelligent management of traffic flows. At the same time, they also bring with them significantly higher safety and security risks. The internet access that they require can be used to tamper with the software and hardware in the vehicle, which means that control over the vehicle could be taken over externally or even remotely.

Safety and security
Therefore, the key to securing acceptance of autonomous vehicles lies in guaranteeing their safety. This includes data security, protecting against attacks and against the disclosure of confidential data, such as motion profiles, and ensuring the quality of data stored in the vehicle. Added to this is the functional safety in the vehicle as well as the need to protect against errors in or failures of individual systems.

The more control the driver cedes to the electronic systems, the higher the requirements that apply. For example, the traffic jam pilot announced by Audi gives the driver ten seconds to respond before it must take over control of the car again in an emergency. In other words, the system must not shut down in the event of an error, but must maintain the functionalities needed in order to avoid or overcome hazardous situations that arise during this time.

Cooperation at all levels
This means that interaction is becoming more important, both between the electronic components as well as between the sub-systems and systems in the vehicle, between the vehicles and the internet – and ultimately, between vehicle manufacturers, suppliers, software developers and electronics providers. Distributors have a key role to play here, one that Rutronik is actively pursuing as a consultant and agent.

In this case, the automotive sector has represented the largest segment for decades. And on this basis, the Automotive Business Unit at Rutronik also offers targeted automotive support. Here, customers can find components from selected suppliers that are tailored to specific requirements. They can also receive global technical and commercial support worldwide in close cooperation and coordination with suppliers. In this way, the Automotive Business Unit supports its customers on an equal footing when it comes to bringing the requested innovative architectures quickly to the road.