AI deployment to drive GPU as a service market

Robust advancements in technology have led to a rise in the deployment of IT-based solutions, impelling GPU as a service market. Nowadays, GPUs (graphics processing units) are being predominantly integrated with the CPU (central processing unit) in self-driving cars, artificial intelligence, and high processing power computing, subject to consumer demands for the installation of graphics in their systems.

In the coming years, it is expected that the surging automation in vehicles for ADAS, internal infotainment, and other significant applications are likely to contribute toward the growth of GPU as a service industry. It is prudent to mention that several product developers also prefer software-based systems such as CAD and CAM for improving the overall output efficiency and accuracy, which would considerably propel GPU as a service market over the years ahead.

Considering the benefits of GPUs, numerous educational institutes have been extending invitations to industry biggies for supercomputer installation. For instance, the Central China Normal University has called upon Inspur to build a petaflop supercomputer, which will help the educational organisation host deep learning workloads and traditional HPC applications.

The deployment of artificial intelligence in particular, is slated to have a significant impact on GPU as a service industry trends, on account of which numerous companies have been striving to improve their AI-based programs and products for learning institutions. Cray for instance has collaborated with Intel to enable advancement in machine and deep learning programs. The robustly increasing adoption of AI-based technologies across scientific and industrial disciplines is thus anticipated to play a key role in the growth of GPU as a service market.

In recent times, the role of graphics in the automotive domain has increased to quite an appreciable extent, given the massive deployment of electronic content in vehicles. In-car electronics have moved beyond fancy HMI and entertainment displays to passenger protection and safety monitoring systems. Automotive OEMs that implement consumer-centric infotainment and innovative safety features are now attracting more consumers, stimulating the demand for GPUs. Thus, the surging deployment of 3D graphics and safety applications in automobiles would heavily drive GPU as a service market share in the forthcoming years. 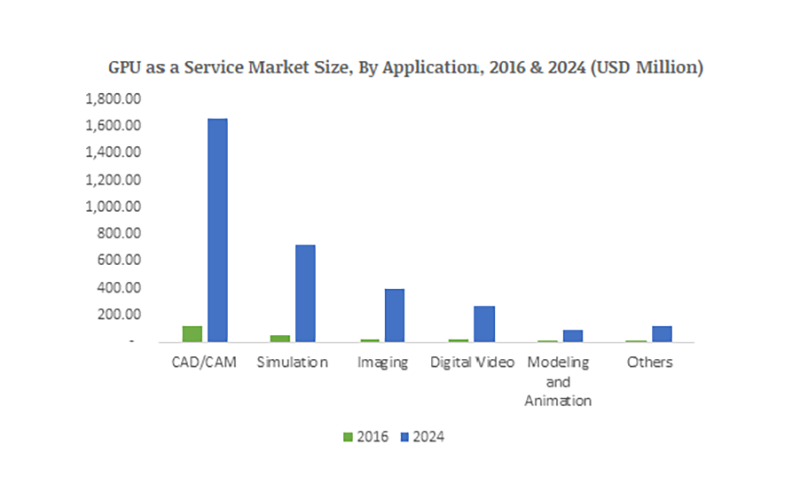 Numerous automakers, have been deploying advanced automotive safety features such as advanced driving assistance systems in vehicles to comply with regulatory norms for occupant and automobile safety. Consumers have also been observed to give more preference for safety features while purchasing the vehicles. It goes without saying that on account of the aforementioned fact, the demand for GPU based built-in computational units that effectively work on safety monitoring would increase by several notches, thereby augmenting the revenue graph of GPU as a service market.

In addition, some automakers are looking forward to speed-up real-time response by reducing the time required for parallel algorithm execution in ADAS with the help of parallel processing power of graphical process units (GPU), further boosting this business vertical. In essence, the shifting trends toward the development of autonomous cars is likely to boost GPU as a service industry share in the future.

The latest trend proliferating GPU as a service industry is the growing utilisation of 3D graphics in the expanding iOS and Android mobile applications. Undeniably, 3D gameplay, UI, and visual captive content are mandatorily being implemented in every mobile operating system. Each one of these implementations demands the deployment of a graphics card for improved functionality, which would commendably impact GPU as a service market share. Effectively, the escalating usage of 3D graphics in mobile devices and the development of fancy UIs incorporating 3D graphics will stimulate GPU as a service market size, forecast to cross a revenue of $5bn by 2024.