The official launch of the ‘The New Ancient’ 3D printed art and design collection has been announced by 3D printing and additive manufacturing company, Stratasys. The collection includes ‘Vespers’, a series of exploratory 3D printed death masks, designed by Neri Oxman and her team, which will be unveiled to the public at the grand reopening of London’s Design Museum next week.

Combining design and computation Oxman produces the masks which, in a landmark breakthrough, emulate the resolution and complexity that is usually only found in nature.

Naomi Kaempfer, Creative Director of Art Fashion Design at Stratasys, explained: “The New Ancient collection marries ancient crafts and designs of past civilizations with advanced technologies to reimagine design in and of the modern world.” 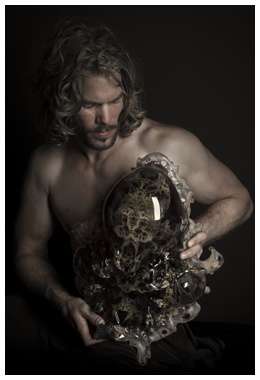 Kaempfer continued: “Oxman, along with her team, is amongst a number of leading designers who have contributed to the creation of the collection, including Zaha Hadid, Nick Ervinck and Daniel Widrig. Oxman’s Vespers epitomise this theme, traversing between modern, cutting-edge technologies and historical crafts and artefacts.”

Oxman, along with her team members – Christoph Bader, Dominik Kolb, Rachel Smith, and Sunanda Sharma of the Mediated Matter Group – led the creation of Vespers. Comprising 15 masks in three sub-series, Vespers portrays the past, present and future, and explores the themes of past worlds and future technologies.

“Made of a single material, such as wax or plaster, the death mask has historically originated as a means of capturing a person’s visage, keeping the deceased ‘alive’ through memory,” explained Oxman. “Vespers’ death masks, however, are designed to reveal cultural heritage and speculate about the perpetuation of life, both cultural and biological.” 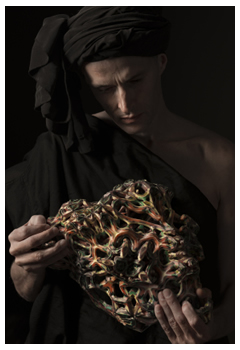 Sub-series one of the Vespers collection, entitled ‘Past’, looks at historic origins, exploring life through the lens of death. Inspired by ancient masks, this sub-series utilises five material combinations to emulate colours commonly found in cultural artefacts across regions and eras, with impressive accuracy. With the implementation of Stratasys’ full-colour and transparency multi-material 3D printing technology, Oxman’s team has created 3D printed objects that, for the first time in history, match the variety and nuance of ancient crafts.

The second sub-series, ‘Present’, explores the transition between life and death, reflecting the progression of the death mask from a symbolic cultural relic in the first sub-series to a functional biological interface in the third. Visually, the surface colorations and geometries seen in the first sub-series are transformed into volumetric material distributions housed within transparent, smoothly curved dome-like structures in the second.

Rebirth is embodied in the third sub-series of masks, called ‘Future’. The company argues the most ground-breaking of the trilogy, the final sub-series engages with synthetic biology to explore whether the death mask can drive the formation of new life, repositioning the objects as habitats capable of interfacing with living microorganisms. Devoid of cultural expressions and nearly colourless, the final five masks ‘re-engineer’ life by guiding living microorganisms through minute spatial features of the artefacts.

Kaempfer explained: “The Vespers masks were photographed by Belgian photographer, Danielle van Zadelhoff, whose particular photography style characteristic of Chiaroscuro is reminiscent of Caravaggio and Rembrandt – resonating with the theme of timelessness as portrayed throughout the series.”