All the world's a 3D printed stage

In the world of theatre 3D printing has already been used to create masks and furniture components, but it is now being used to print scenic design. This is taking place in Rome for Daniel Auber's 'Fra Diavolo' play, directed by Giorgio Barberio Corsetti, with conductor Rory McDonald, on stage at the Opera Theatre on 8th October 2017 and in replica until 21st October. WASP is a technology partner of this event. When asked to make the scene of the work, the WASP team was surprised, but as it always happens, it immediately accepted the challenge.

The works started in mid-April and have ended in mid-July, with the delivery of the scenic components to the Roman Theatre. The venture started when the scenographer gave Wasp a 3D printed model of two deformed historic buildings, two large facades with windows and terraces, similar to a Dalí picture: the deformed perception of reality is a central element of the work, which necessarily reflects also in its scenographic structure. 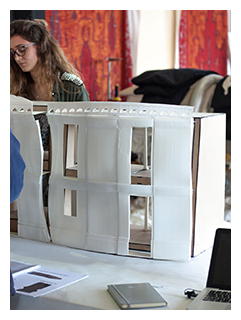 The director, supported by Rome's Superintendent, Carlo Fuortes, who is confident in using 3D printing for studio and stage design, has chosen the 3D printing as the best possible solutions to achieve the desired result.

The 3D model was a unit block, and it had to be subdivided into 223 pieces that could fit into the DeltaWASP 3MT print size, which is a 1x1m cylinder. The material used is PLA colored of white pigment. To tackle the work, the WASP team has used five printers, working at full speed during the last three months in the new warehouse where this out of the ordinary project, has been planned and realised.

The biggest challenge was not to overtake the deadline. Thanks to a good work planning and to the speed of the WASP machines, the result came without any special problems at the set deadline: in mid-July the warehouse-floor was completely filled with pieces of the scenography, ready to be sent to Rome.

In the capital, within the spaces of the Opera House, the components were assembled and fixed on a wooden carrying structure. A few small inaccuracies did not compromise the outcome, on the contrary they emphasised the craftsmanship and the special character of the work, and the director welcomed the final result with great satisfaction. It was a test, an experiment, and a successful achievement that could pave the way for new future collaboration between theatre and 3D printing industry.