Women in STEM are leading innovation: here’s why

It was not always the case that women were significantly involved in STEM. When the American Society of Mechanical Engineers (ASME) was founded in 1880 there was not a single female member – that milestone took a further 38 years, with Kate Gleason becoming the first woman to join - in 1918.

These days, the role of women in STEM has increased in most places, although the statistics paint a picture that is far from consistent around the world. In the US, women represent almost half (47%) of the overall workforce, yet only one-in-seven (14%) engineers are female.

While the overall trend is that the proportion of women in STEM is growing in Europe, in some countries the opposite is true. Belgium, Estonia and Hungary have all seen a drop in the past two decades and Finland has gone backwards from a slight majority (50.9%) to under a third (30.5%) in the same time-frame.

One strong indication of future trends is to look within universities as these contain the female engineers and scientists of the future. Taking the UK as an example, in the engineering and technology and computer science sectors, only one-in-six students is female, and this situation is fairly stable. However, contrast this with a fairly consistent 39% female student base in the mathematical sciences and consistent year-on-year growth in the physical sciences, reaching 43% in 2018/19.

While the situation is not yet ideal, there is a general trend of progress and hope for the future, not least because many organizations are spotlighting women in STEM and developing programs to encourage more females to enter STEM education and professions.

In the US, the Girl Scouts has reorganised its educational model and created four pillars of content to include STEM. Girls Who Code teach females to program in an attempt to address gender imbalance and Technovation empowers females in engineering and technology streams to become innovators and leaders.

Engineering companies such as General Motors, Lockheed Martin and Siemens (among others) are supporting STEM initiatives to improve the situation. Renowned professional institutions including the Society of Women Engineers are providing mentors and sponsors to women while ASME is running dedicated networking events for women, allowing them to network with their peers.

Aside from statistical trends, there are many positive examples of women achieving success in the STEM field. Here are just three examples:-

Fetch Robotics delivers advanced robots for the logistics industry, led by their female CEO, Melonee Wise (pictured top). She holds two bachelor’s degrees (mechanical and physics engineering) and a master’s in mechanical engineering, all from the University of Illinois at Urbana-Champaign.

Melonee has gained significant experience in open-source robot operating systems and led a team of engineers to develop advanced robot hardware and software.

Since she founded Fetch Robotics in 2014, the company has grown under her leadership and is now recognised as a key player in the robotics as a service industry. 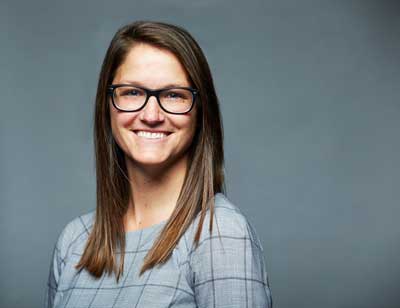 Katie Weimer (right) joined 3D Systems in 2007, and has spent more than a decade delivering on her passion to enable better healthcare through innovative technologies. She is committed to advancing 3D printing in healthcare by developing bespoke additive manufacturing solutions that enhance healthcare delivery and patient care.

Katie is currently the Vice President of Regenerative Medicine, an integral member of the team focused on developing novel bioprinting solutions. Previously, she led the company’s global personalized healthcare solutions and medical device manufacturing operations based in Littleton, Colorado and Leuven, Belgium.

Also known as 'Ladyada', successful entrepreneur Limor Fried (below) is a hardware engineer and software pioneer. She studied at MIT, earning bachelor’s and master’s degrees in electrical engineering & computer science (EECS) and, during her time at MIT, founded the educational electronics company Adafruit from her dorm room.

Established to deliver high quality electronics products for makers of all ages and skill levels, Adafruit has grown to employ over 100 people in downtown New York City. The product range has expanded to include tools, equipment, and open source resources that Ladyada personally selects, tests, and approves.

Fried was the first female engineer to grace the cover of WIRED and named a White House Champion of Change in 2016. In 2018 Fried became one of 'America’s Top 50 Women in Tech' by Forbes magazine.

While it is true that females remain in the minority in STEM, it is very clear that there is significant progress, especially in many European countries as well as leading employers and professional institutes.

The three outstanding women we have featured in this blog highlight how women are already occupying leading positions at the forefront of innovation.