With dual themes of the Internet of things (IoT) and security, many exhibitors at this year’s embedded world focused on their offerings for small consumer devices and wearables, showing components and devices with integrated connectivity and smaller footprints. Of course, since the extent of the IoT reaches far outside consumer devices, others demonstrated communications technologies for vehicles, factories and metering. Common to pretty much all IoT applications is the demand for lower power operation, so it’s no surprise that low power radio technologies were popular. Below is a round-up of some of the low power and ultra-low power radio demonstrations and products from the show floor.

German start-up Digimondo, in collaboration with Semtech, set-up a demonstration of low power radio for the show. The two created a LoRA WAN network by attaching LoRA transmitters to 30 Nuremberg taxis which could communicate with LoRA antennas placed on TV masts around the city. On the company’s booth, visitors could see the taxi locations tracked in real time on a monitor. Just three antennas were required to cover the whole city, and the speed the taxis travelled did not present a problem.

LoRA WAN, a Sub-GHz ISM band protocol based on Semtech technology, is designed to connect battery powered sensors in the IoT. The properties of the Sub-GHz band mean its range can be up to ten miles (further than typical cellular networks), and it can easily penetrate buildings for indoor use, even when powered only by small batteries. This technology is already being used for applications as diverse as agriculture monitoring, public safety, building and infrastructure management, water conservation, and natural disaster tracking, claim Semtech.

Digimondo is a subsidiary of utility company E.ON, and the company is developing modules that connect electricity meters to the IoT, drawing on LoRA’s ability to connect to devices indoors and even in basements. Their aim is to set up a LoRA network across the whole of Germany using rooftop antennas by mid-2016, which can be accessed free by the public (commercial users will have to pay).

In the mean time, Microchip has made a development kit for LoRA applications which includes light and temperature sensors and an OLED display to provide feedback on sensor and connection status.

Meanwhile, Silicon Labs showed off its multi-protocol low power wireless SoCs. Its wireless SoC portfolio is called the Gecko (below) range because of its ability to conserve energy - it comes in several flavours but all are based on the ARM Cortex M4 core with a wireless 2.4GHz RF transceiver and various memory options on a single die. For example, the Blue Gecko family are Bluetooth Smart and proprietary protocol transceivers, Mighty Geckos are the ZigBee and Thread devices (though some can do Bluetooth Smart and proprietary too), and Flex Gecko parts are intended solely for proprietary low power protocols. They are all pin and software compatible.

Multi-protocol devices like the Gecko products are increasing in popularity as they serve many use cases in the IoT. For example, a retail lighting application controlled via Thread might also double as a Bluetooth Smart beacon; a garage door opener might be controlled via Bluetooth Smart and then use a proprietary protocol to control the motor to open the door; or a hospital bed might be primarily on a ZigBee network but become a Bluetooth Smart device when a nurse controls it directly from a tablet.

Silicon Labs also demonstrated its Simplicity Studio development platform for Gecko devices. This includes Energy Profiler which allows the developer to compare real time energy consumption of a Gecko wireless SoC alongside the code running on it, so that a particular line of code that produces a power peak may be identified quickly and easily.

On the Nordic Semiconductor booth, the company demonstrated a new software development kit for its nRF52 Bluetooth Smart SoC. The SDK (below) is for battery powered IoT applications and is a complete IPv6-ready IP suite. Nordic says the kit means developers can commission end nodes to an IPv6 over Bluetooth Smart network from a smartphone app with ease.

Nordic also showed a Bluetooth Smart remote control reference design which can be controlled by voice with speech recognition control. The reference design also features a six-axis motion sensing ‘air mouse’, a multi-touch track pad and 39 programmable buttons - it’s based on the nRF51822. 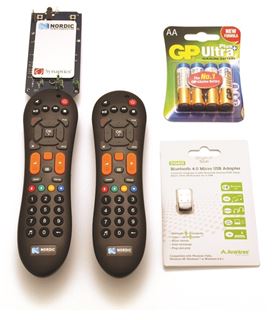 Digi International featured several low power radio demonstrations at the show. One concerned the company’s Thread-ready XBee module, a brand new RF module in the XBee series which provides a quick and easy path to upgrading designs to communicate via the Thread protocol (Thread is a low power, IPv6 addressable protocol for self-healing mesh networks). The Thread-ready XBee module is the first in a series of Thread-based products Digi will be releasing this year, including a fully certified Thread module and a border router, aimed at industrial networking.

Another demos from Digi centred on the Parallax ELEV-8 Quadcopter (below). It actually comes as a kit which the user assembles (without the need for soldering). These Quadcopter kits are widely used in higher education and R&D. The Quadcopter’s control module uses Digi’s XBee 802.15.4 radio (in the EU) or XBee-Pro 900HP radio (in North America) to transmit long range, line of sight signals with data on telemetry and performance back to a ground station for analysis. It can support a 1.36kg payload and with the 900HP radio, the range is up to 14km. 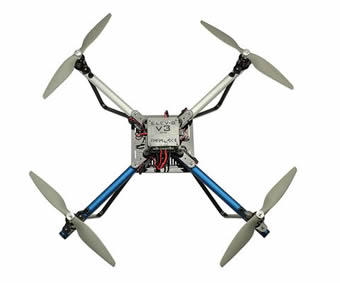 Finally, Analog Devices presented a demo of its wireless sensor network (WSN) platform, which can be used as a hardware and software evaluation and development platform for IoT applications. The platform incorporates a base station node and several sensor nodes for use with different sensors. The idea is that the plug-and-play boards can be connected in different combinations to represent different applications in order to get a quick prototype up and running.

As the IoT continues to progress from industry buzzword to growing reality, communications technology is adapting to very low power operation in order to maximise battery life. Battery life continues to be a key parameter, especially for devices that require a technician visit to change the batteries, and for wearables and other small devices that want to run on tiny coin cells or even energy harvesting.