To get an idea of the level of complexity and quality that can be achieved on Wizard GPUs, the company will be showcasing an Apartment scene (pictured). This photorealistic rendering demonstration requires billions of rays per second (gigarays) of computational performance and is possible on only very high-end workstations with multiple desktop GPUs stacked together consuming north of 500-700W.

With the PowerVR Wizard GPUs, Imagination are able to achieve the same (or better) performance while consuming ten times less power.

Imagination will also be announcing a collaboration with Unity Technologies to bring its PowerVR Ray Tracing technology to the Unity game engine. The first result of this partnership is a lightmapping tool that will help artists quickly design and visualise advanced lighting effects in a convenient, easy to use workflow. 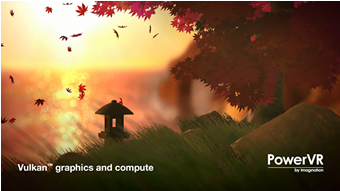 Developers attending GDC 2016 will have the opportunity to see Imagination demonstrating a number of Vulkan graphics and compute applications at its booth. One example is Sunset Vista, a demo that uses Vulkan’s graphics and compute pipelines to create a calm and picturesque rendering of a cliff-top sunset.