Due to its continued growth, electronica will, for the first time, take up 17 halls at the Messe München exhibition grounds. The new halls C5 and C6, which will be completed in the spring of 2018, will also be integrated into the hall structure. Furthermore, halls C2 and C3 will be used for the first time. electronica will take place from 13th to 16th November, 2018.

Angela Marten, Exhibition Director for the trade fair, has explained the layout of the exhibition areas and the process that led to the changes.

Q. Ms. Marten, the last electronica was held in 13 halls. In 2018, it will expand to 17 halls. What developments have led to the event becoming so much bigger?

A. The exhibition grounds were already expanded for electronica 2016. Demand far exceeded the space available. At the time, hall C4 was then added to the exhibition space. After the event, however, it was obvious that the layout needs to be changed fundamentally if we want to give the trade fair a hall structure that can meet future needs. Only then can we ensure that the exhibition areas will not need to be changed again even if our exhibitors require more space. We held in-depth talks with the Advisory Board and exhibitors before we finally came up with a new structure for the exhibition grounds. That also resulted in the expansion from 13 to 17 halls.

Q. What considerations led to the new hall layout?

A. When we looked at the hall plan from 2016, we quickly realised that there had only been two entrances, West and East. As a result, the flow of visitors moved from west to east or vice versa. This had a considerable influence on the positioning of the segments, which were arranged according to the direction visitors were walking in. By integrating halls C2 and C3, as well as the newly built halls C5 and C6, we now also have the North, North West and North East entrances, which allows access to the exhibition grounds from all sides. At the same time, a north-south arrangement of the segments in the future will ensure an even spread of visitors across the entire grounds. In this new arrangement of segments, semiconductors, the core of electronica, will move to the centre. 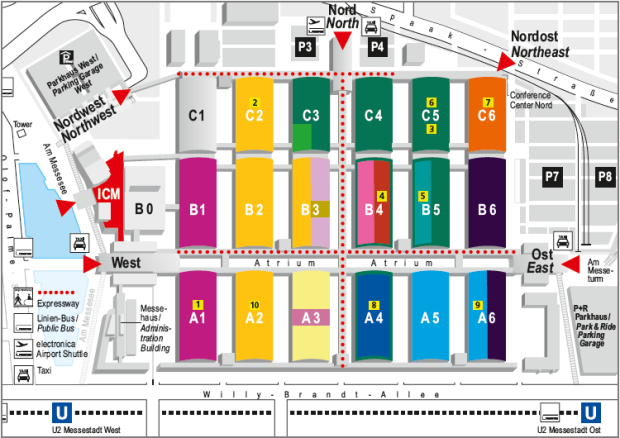 Q. What does that actually look like? In which halls will visitors then find semiconductors and the other segments from 2018?

A. With the new layout, semiconductors will be in halls A4, B4, C4 and the adjacent halls B5, C5 and C3. As a co-located event, SEMICON Europa will take up part of hall A4. The automotive and embedded systems segments and, directly adjacent to them, displays and sensors will also move closer to the centre.

Electromechanics/system periphery, relays and casing technology are another segment that take up more than two halls, which is why we have chosen a north to south arrangement on the grounds for this as well. From 2018, exhibitors from these areas will be in halls A2, B2 and C2 at electronica. Circuit carriers and EMS will move to halls A1 and B1, and passive components to A6 and B6. As a result, the remaining areas will move too.

Q. What will happen to the numerous forums that were integrated into the halls?

A. The forums will move as well and remain in the segments they were in before. The electronica automotive forum, for example, will move to hall B4, and the electronica embedded forum to B5.

Q. The new hall structure will not just affect exhibitors: How will trade visitors find their way around the trade fair?

A. That is correct. In 2018, electronica will be bigger than ever before: The individual segments are growing and more space is available for the supporting program. In spite of the size of the trade fair, the segments are easy to find thanks to the clear hall layout. To provide additional guidance for visitors, the segments are colour-coded, both on the hall plan and on the grounds, e.g. with appropriately coloured carpets. When positioning the segments on the grounds, it was also important to us to not only get visitors to their desired area as quickly as possible, but to also inspire them. We therefore positioned the segments in such a way that neighbouring topics are next to each other wherever possible. As a result, electronica offers a unique experience: the entire world of electronics in one place.