Being ultra-careful when thinking about ultraviolet

When you specify electrical enclosures for use in outdoor installations it requires consideration of the possible effects of ultraviolet light, which can slowly degrade some materials. Chris Lloyd, Managing Director of Spelsberg UK, one of the country’s foremost enclosure manufacturers, looks at the issues and suggests some guidelines for selection.

Electrical enclosures installed in outdoor locations have to put up with a lot during their working life. There are the obvious issues like wind and rain, plus the possibility of occasional extreme weather, as well as risk of damage – accidental or intentional. Then there are the less thought-about issues of pollution, chemical attack and possible electrical interference.

There is, however, one near-constant issue that can easily be overlooked, but which has to be considered. Anything in the outdoors is exposed to the naturally occurring ultraviolet light that is part of sunlight. This can cause some materials to degrade faster than if they were indoors.

Ultraviolet light can contribute to the aging of plastics, and the discoloration of dyes and artwork. It can cause materials to become brittle, crack and weaken, to change colour or turn chalky. Degradation takes place at the atomic level, with the ultraviolet light attacking the pi electrons that hold individual atoms together. The rate of degradation is related to the UV’s flux (power) and wavelength, plus the chemical structure of the material. 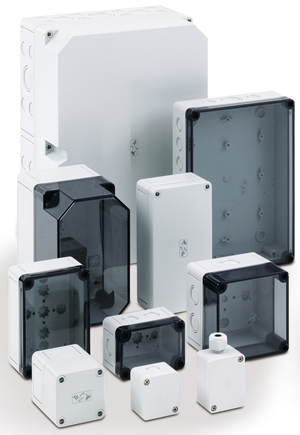 When asked to help specify an enclosure for use outside, Spelsberg nearly always recommends a polycarbonate unit because of the material’s improved resistance to ultraviolet degradation compared to other plastics.

Looking at the practicality of enclosure selection it is notable that ABS and polystyrene would tend to discolour and go slightly yellow after a few of years in an external location. This would indicate that the material is breaking down and if investigated would probably be more brittle and less strong than when installed. An inadvertent blow could result in significant damage to the enclosure or even shatter it completely, possibly leaving dangerous sharp edges.

In contrast polycarbonate enclosures will last a significant number of years longer in an outdoor location before needing to be replaced. They are also better able to withstand temperature extremes and generally weather better overall. Polycarbonate enclosure typically cost about 20% to 30% more than other materials, but this extra expense is easily recouped by the extended life expectancy.

Of course plastic isn’t the only option, and it is tempting to think that a metal enclosure would be a better option for outdoor use than a plastic one, but this is not necessarily the case. Metals expand and contract markedly with heat or cold, which may compromise their seals and lead to major problems if damp gets into the electrical components. There is also the ever present risk of rust, which may mean they cannot be opened easily, are more susceptible damage and water ingress.

Beyond the initial material selection there are some common sense steps that can be taken to extend an outdoor enclosure’s working life. These mainly relate to the siting of the unit, which if it can be in the shade, under a canopy or other cover, in the lee of an adjacent building or on the north side of a building, will reduce exposure to direct and indirect sunlight and therefore ultraviolet light. In fact Spelsberg UK has provided many enclosures/junction boxes for installations in the north of Scotland in chemical plants and oil refineries and they have provided many years of sterling service.

In some instances it also possible to add specialised UV protection to the material if direct exposure is unavoidable. For example, Spelsberg also supplies larger, typically floor-standing, enclosures in GRP (Glass Reinforced Plastics). Special additives can be included in these during manufacture which reduce the adverse effects of ultraviolet light considerably. This reduces discoloration and maintains the materials high tensile strength, making it perfect for heavy duty applications such as trackside and offshore.

There is no one-stop shop solutions for specifying enclosures for outside installations. Each application has a list of requirements which means the balance between life expectancy and cost needs to be approached from a different perspective.