When asking about ‘Industry 4.0’ in the manufacturing or industrial control sectors typically responses fall into one of two categories. Some haven’t yet spent much time exploring the concept are likely to dismiss the term as Marketing hype, or a gross over-simplification like ‘Web 2.0’. But companies who have investigated the principles behind a smart factory see this trend as an opportunity to significantly increase their revenues while at the same time slashing their operational costs.

What’s not to like?
In this post Wind River outlines some of the key business challenges presented by Industry 4.0 and explain how they can be addressed by selecting the appropriate platform for secure, on-premise critical infrastructure.

Technically, the term should be ‘Industrie 4.0’ because the initiative started as a vision sponsored by the German government, which actively promotes the computerisation of manufacturing. At the Hannover Fair in October 2012, the Industry 4.0 working group presented a set of recommendations to the German government and then they subsequently presented their final report at the same event in April 2013.

The ‘4.0’ term comes from the generally-accepted progression of major phases in manufacturing. Phase 1 comprised steam and the initial machines that mechanised some of the work that our ancestors did manually. Phase 2 brought electricity, the assembly line and the start of mass production. Phase 3 included the advent of computers and the beginnings of automation, when robots and machines began to replace human workers on assembly lines.

As the next significant industry disruption, Industry 4.0 introduces what is commonly known as the smart factory, in which cyber-physical systems monitor the physical processes of the factory and make decentralised decisions. Physical systems are implemented as the Industrial Internet of Things (IIoT), communicating and cooperating in real time both with each other and with humans.

There are compelling business motivations for companies to adopt Industry 4.0. In a comprehensive report, PWC Global points out that companies who successfully implement Industry 4.0 no longer need to choose between focusing either on a better top line or a better bottom line, because they can improve both at the same time.

Over the next five years, the companies that PWC Global surveyed expect to reduce costs by an average of 3.6% per year, while increasing annual revenues by an average of 2.9%. More than half the respondents expect their Industry 4.0 investments to yield a return within two years or less, given investments of around 5% of their annual revenue. If even half of these expectations are met, Industry 4.0 has the potential to reshape the competitive landscape and bring fundamental change to established manufacturing industries.

There are some significant challenges though, several of which relate to the compute platforms that run software-based control systems as well as analytics software that drives real-time decisions. For critical infrastructure such as manufacturing and process control, the most fundamental requirement for this software is that it must run reliably, securely and safely, continuously gathering industrial data from an array of sensors and actuating responses in real time, while consolidating both operations and control functions.

The first critical requirement for a critical infrastructure platform is low-latency virtualisation. Virtualisation enables a single compute platform to run the diverse set of functions and applications found in smart factories. The platform must provide ultra-low latency in order to deliver near real-time performance for critical applications. At the same time, it must optimise resource utilisation system-wide in order to minimise both CAPEX and OPEX.

High availability is vital. In the event of hardware or software failure, the platform must be able to perform an automatic failover quickly enough to ensure the integrity of the control system. This implies a failover speed orders of magnitude faster than standard cloud platforms developed for IT applications and on a par with the speed required for virtualised telecom infrastructure. The virtualisation platform must facilitate failover in a number of ways, such as restarting a clean backup software image without a reboot or turning control over to a full redundant server to overcome catastrophic hardware or software failures.

Finally, security. While traditional, physical control systems provide ‘box-level’ security features with no provision for end-to-end threat protection or dynamic updates, the requirements for Industry 4.0 are significantly more demanding. In smart factories, it’s critical to mitigate security threats that target devices and subsystems across the facility, while recognising that new, ever more sophisticated threats are emerging constantly. Critical infrastructure systems require a secure chain of trust that extends all the way from physical hardware or sensors extending into the Virtual Machines (VMs) that run the software-based control functions and analytics. Data must be encrypted and the network itself must ensure autentication, authorisation and accounting with secure identities. 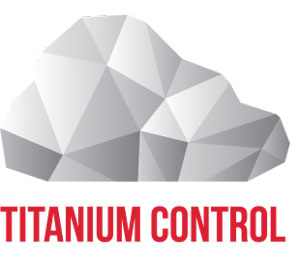 As mentioned earlier, a key premise of Industry 4.0 is that manufacturing companies can improve their top-line revenue generation while simultaneously lowering their operating costs. Titanium Control facilitates both these objectives, maximising the overall return on investment for a smart factory.

For top-line revenue growth, Titanium Control allows operators to efficiently scale control systems to add capacity, while accelerating the introduction of new functions and services to optimise control processes. As a software platform, it enables manufacturing companies to leverage the expertise of millennial programmers and innovative third-party software vendors.

This post has only scratched the surface of Titanium Control, all designed to streamline the deployment and operation of virtualised industrial control applications. To know more about Titanium Control, click here.