What’s inside all electronic devices? The answer is rigid components like circuit boards, containing chips, resistors and capacitors - all held together with wires. Nicolette Emmino explains that things could be about to change.

Flexible electronics have been a recurring theme in the engineering industry due to the technology’s potential to create a new generation of devices that contain printed circuit boards and other parts that are still stiff, but also flexible, so that products can bend and fold.

Flexible electronics have been offering possibilities in creating new concepts like bendable smartphones, flexible displays and conforming photovoltaic cells. The technology also provides the industry with the ability to reduce costs, since leaders are working to print flexible electronics onto plastic film – the same way you would print a newspaper.

“If we could make flexible electronics cheap enough, you could have throwaway electronics. You could wear your phone on your clothing, or run a bioassay to assess your health simply by wiping your nose with a tissue,” said Enrique Gomez, an Assistant Professor of Chemical Engineering at Penn State.

The evolving field of research regarding flexible electronics has seen a great deal of progress over the last ten years.

The recent growth of nanomaterials such as carbon nanotubes, graphene, semiconductor nanowires and nanofibres for flexible electronic applications, has allowed for novel technology; like large scale devices and circuitry, and flexible energy devices, such as solar cells and batteries.

According to Grand View Research, the flexible electronics market is expected to reach an estimated $87,210m by the year 2024. The growth is expected to come as a result of the demand for technology like smart glasses, e-books, smartphones, smart watches and e-papers. In addition, as the style and functionality of wearable devices transitions, new avenues for discovering novel applications incorporating this technology will arise.

Breakthroughs
Research labs worldwide are helping to make flexible devices a reality. A team of engineers from the University of Wisconsin-Madison recently created the world’s fastest, stretchable, wearable integrated circuits, which could advance the IoT and help to create a much more connected, high speed wireless world (pictured above right). 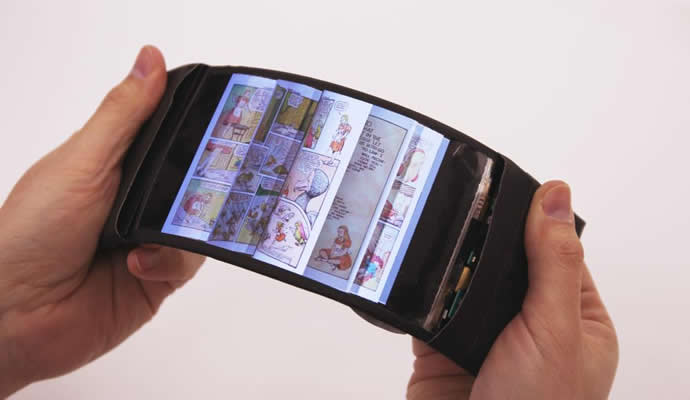 Another major breakthrough comes from an international team that created a material capable of healing all of its functions automatically, even after breaking multiple times. “Wearable and bendable electronics are subject to mechanical deformation over time, which could destroy or break them,” said Qing Wang, Professor of Materials Science and Engineering, Penn State. “We wanted to find an electronic material that would repair itself to restore all of its functionality, and do so after multiple breaks.”

The material is able to self-heal because boron nitride nanosheets connect to one another with hydrogen bonding groups functionalised onto their surface. So when two pieces are placed near each other, the natural electrostatic attraction bonds the elements and brings them close together – in effect causing ‘healing’.

Where are the flexible devices?
Companies like LG and Samsung have been showing off concepts of foldable smartphones for a while now, and Samsung is said to actually be releasing a smartphone that bends by 2017, with the main challenge being reducing manufacturing costs, according to reports from Forbes. Lenovo also showed off two prototype devices at Lenovo Tech World 2016 in San Francisco in June - the CPlus flexible smartphone and smartwatch and the Folio foldable tablet.

However, there are other, lesser known groups making strides behind the scenes and developing bendable electronics prototypes. One example is the team of engineers from Queens University’s Human Media Lab, that introduced ReFlex (below), the world’s first bendable smartphone, earlier in the year. The team developed the world’s first full colour, high resolution and wireless flexible smartphone to combine multi-touch with bend input.

The multiple advances and development of flexible electronic devices, demonstrates its true feasibility. The technology is proving itself not only adept for everyday use, but also for medical and energy fields.