In the presidential palace in Tehran, on 16th January 2018, the Energy Globe World Award 2017 winners were announced. Guests from 60 different nations joined the ceremony, among them ministers of the Iranian Government who announced the winners. Two thousand projects from 178 countries were submitted for the prestigious environmental award in five categories: Earth, Fire, Water, Air and Youth. 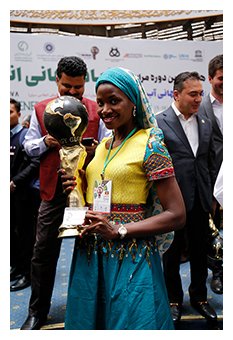 The award in the category Earth went to the Rural Green Environment Organisation from Afghanistan for its efforts to reforest degraded watershed and establish fruit orchards through community involvement in one of the remotest and poorest mountainous valleys. Kalinga Institute of Social Sciences from India received the award in the category Fire. Green initiatives undertaken by this institute have found a great way to reduce the ecological footprint for large scale cooking.

In the category Water two projects shared the first place. One of the awards went to Puritas Limited from Sri Lanka for providing clean drinking water to people with chronic kidney disease through reverse osmosis water purification systems. The second award Kerman Copper Region of the Islamic Republic of Iran for its integrated water master plan to provide water for the Sarchechmen mine, which includes an upgrade of tailings disposal and water management system.

The award in the category Air went to the Austrian Post for reducing their ecological footprint by replacing conventional vehicles with electric vehicles in their operations. Sustainable Coastlines Charitable Trust from New Zealand received the award in the category Youth for their flagship education centre, where pupils, community groups and business are taught to become guardians of the environment.

The overall Energy Globe Award 2017 prize was awarded to Trees Adoption Uganda with its project 'Trees4School'. It implements climate change mitigation activities like planting trees, additionally helping vulnerable young people with financial support for their education and startup capital for their own business.

This year two special awards were presented. Advantage Austria received one of the awards for their dedication to organising the national ceremonies in almost 100 countries. The second prize went to the Iranian Society for Green Management for the cooperation over the years and organisation of the Energy Globe World Award ceremonies in Tehran.