The closer autonomous vehicles inch towards a day-to-day reality, the more questions the concept seems to throw at us. Despite assurances from autonomous vehicle pioneers such as Elon Musk, there are still reservations around how, for example, automated vehicles will interact with each other and their surrounding environment, and how will the issues around security be resolved?

Another issue that has surfaced recently is how autonomous vehicles will impact on drink driving laws. A recent report by the National Transport Commission (NTC) in Australia (where commercial roll-outs of autonomous vehicles are expected by 2020), has claimed that failure to amend the current drink driving laws of the country is negating the benefits of autonomous vehicle adoption – key to which is an increase in road safety. There are currently around 1,300 deaths on Australia’s roads each year – the vast majority of which can be attributable to human error.

The report has stated that users of autonomous vehicles should be exempt from drink driving laws and have compared their use while drunk to getting into a taxi. By making it legal to use an autonomous vehicle while under the influence of alcohol, the report claims that it will help to significantly reduce instances of drink driving, as individuals who have over indulged can be chauffeured home in their self-driving car rather than taking the risk of getting behind the wheel themselves. And of course it would be impossible for someone, drunk or not, to get behind the wheel and take control of a car that is fully automated.

While it is expected that autonomous vehicle roll-out will greatly increase road safety by reducing incidents of drink driving (among other factors), one of the key issues that the report addresses is the culpability should an autonomous vehicle be involved in an accident or experience a malfunction – the drunk person or the autonomous driving system. 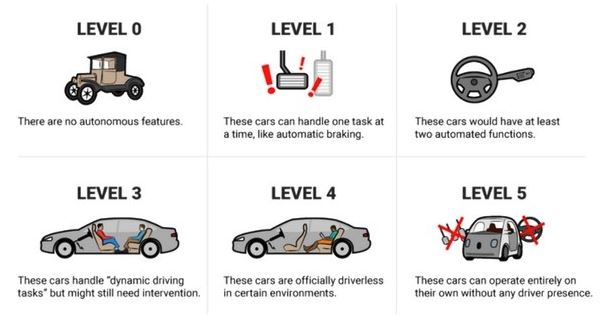 Above: The five levels of vehicle automation

Another grey area would be whether people under the influence of alcohol would still be exempt from drink driving laws if the vehicle in question included a switch-over function that could make it manual – the last thing you’d want is an inebriated passenger taking over the driving in a semi-autonomous car. In this case the report has stated that the exemption should only apply to fully autonomous cars (level 5 automation) – quite a leap from where we are today.

Fully autonomous vehicles are obviously still a long way off, and therefore so too are proposed changes to the law, but it is still another question mark around the technology that perhaps hadn’t been considered when the concept of self-driving cars were first muted.

Another less predictable consequence of self-driving cars is what it means for the alcohol industry in general. A future that involves self-driving cars would spell the end of the road for the ‘designated driver’. We all have that one reliable friend who takes one for the team and stays on pop for the evening while their peers hit the Jägerbombs! However, that could be a thing of the past. Fully autonomous cars mean that no one needs to drive – meaning everyone can drink.

It also means that time wasted driving, can now be spent drinking in the vehicle itself. While your local taxi company may have something to say if you popped the cork of the bubbly in the back seat, if you are the owner of the self-driving car, you will presumably be able to please yourself.
Morgan Stanley estimate that driverless cars could result in a 0.8% CAGR for the alcohol industry and will open up 380 billion drinking hours worldwide that would otherwise have been lost by people having to get behind the wheel and concentrate on driving – potentially that’s a lot of alcohol.