Set to be published and presented later this month in The McClean Report 2019, IC Insights is in the process of completing its forecast and analysis of the IC industry. Among the semiconductor industry data included in the new 400+ page report is an analysis of semiconductor merger and acquisition agreements.

The historic flood of merger and acquisition agreements that swept through the semiconductor industry in 2015 and 2016 slowed significantly in 2017 and then eased back further in 2018, but the total value of M&A deals reached in the last year was still nearly more than twice the annual average during the first half of this decade. Acquisition agreements reached in 2018 for semiconductor companies, business units, product lines, and related assets had a combined value of $23.2bn compared to $28.1bn in 2017, based on data compiled by IC Insights. The values of M&A deals struck in these years were significantly less than the record-high $107.3bn set in 2015.

The original 2016 M&A total of $100.4bn was lowered by $41.1bn to $59.3bn because several major acquisition agreements were not completed, including the largest proposed deal ever in semiconductor history—Qualcomm’s planned purchase of NXP Semiconductor for $39bn, which was raised to $44bn before being cancelled in July 2018. Prior to the explosion of semiconductor acquisitions that erupted four years ago, M&A agreements in the chip industry had a total annual average value of $12.6bn in the 2010-2014 time-period. 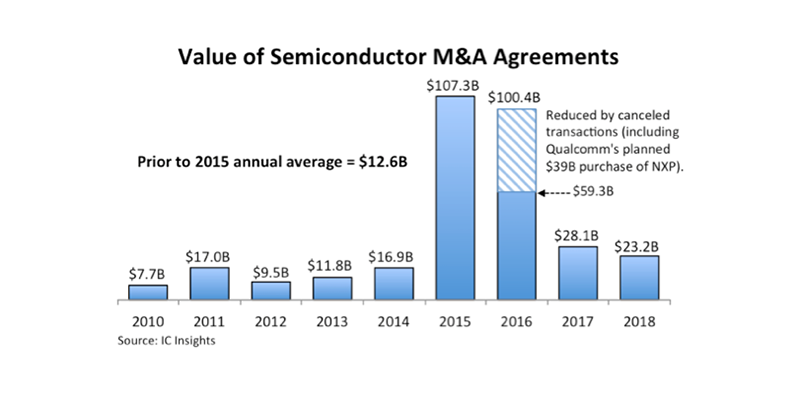 The two largest acquisition agreements in 2018 accounted for about 65% of the M&A total in the year. In March 2018, fabless mixed-signal IC and power discrete semiconductor supplier Microsemi agreed to be acquired by Microchip Technology for $8.35bn in cash. Microchip said the purchase of Microsemi would boost its position in computing, communications, and wireless systems applications. The transaction was completed in May 2018. Fabless mixed-signal IC supplier Integrated Device Technology (IDT) agreed in September 2018 to be purchased by Renesas Electronics for $6.7bn in cash. Renesas believes the IDT acquisition will strengthen its position in automotive ICs for advanced driver-assistance systems and autonomous vehicles. The IDT purchase is expected to be completed by June 2019.

Just two other semiconductor acquisition announcements in 2018 had values of more than $1bn. In October 2018, memory maker Micron Technology said it would exercise an option to acquire full ownership of its IM Flash Technology joint venture from Intel for about $1.5bn in cash. Micron has started the process of buying Intel’s non-controlling interest in the non-volatile memory manufacturing and development joint venture, located in Lehi, Utah.

The transaction is expected to be completed in 2019. In September 2018, China’s largest contract manufacturer of smartphones, Wingtech Technology, began acquiring shares of Nexperia, a Dutch-based supplier of standard logic and discrete semiconductors that was spun out of NXP in 2017 with the financial backing of Chinese investors. Wingtech launched two rounds of share purchases from the Chinese owners of Nexperia with a combined value of nearly $3.8bn. The company reportedly hopes to take majority ownership of Nexperia (about 76% of the shares) in 2019.

Read more
Analysis
UK fintech market powers through with surge in hires
Analysis
Infrared LED market to reach $1bn by 2026
Analysis
Signs of optimism in the electronic components industry
Analysis
The $500bn effect of digital transformation
Analysis
Global semiconductor sales down 1.2% in April 2020
Analysis
Capacitive sensors market size worth $40bn by 2026
Analysis
The impact of the new COM-HPC standard
Analysis
How children can still get into STEM during lockdown
Analysis
Businesses go digital to survive COVID-19
Analysis
More than 88% of organisations use cloud computing
Analysis
Banks ramp up tech recruitment in response to COVID-19
Analysis
Fingerprint-on-display market takes off in 2019